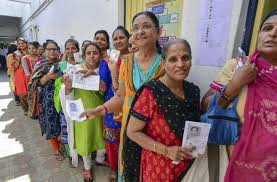 Momspresso, India’s largest user-generated content platform for mothers, has issued a press release around Moms Manifesto: 70% of Indian moms are not influenced by political gimmicks.

Being the largest community worldwide for mothers, Momspresso has taken the opportunity with General elections to address the voice of Indian Mothers. It has launched a Moms Manifesto, addressing what moms want from General Elections 2019.

The study finds that 70% of Indian moms are not influenced by political gimmicks. The study was conducted pan-India amongst a sample size of 1317 mothers with a variation of working – 33.7% and Homemaker – 66.3%

“At Momspresso, we strongly felt that the real issues that impact the lives of moms have been underrepresented in all the manifestosand conversations around us. As the largest community of mothers, we decided to take the onus of creating a manifesto that presents the voice of mothers, a view that is crucial to the overall progress of the country. Through this survey, we are bringing forth these voices that often remain unheard, and present their point of views through our platform. We believe that these concerns and aspirations of mothers will now reach the right audience among the powers that be.”  – says Mr. Vishal Gupta, Co-founder & CEO of Momspresso

For more information, we will be happy to connect you with Vishal Gupta, Co-founder & CEO, Momspresso

The key findings and their weight are as follows

Looking forward to your response.

About Momspresso: Momspresso is a multilingual content platform that caters to the multifaceted mums of today.  It is the world’s largest platform for moms, brewing with the energy of possibilities. Launched in 2010, Momspresso is based out of Gurgaon, Haryana. Interestingly, the foundation of the platform was laid by three fathers – Vishal Gupta, Prashant Sinha, and Asif Mohamed. Momspresso attracts 20 million mums every month, consuming and creating content from a community of 10,000 bloggers. 95% of this content is user-generated and is available in several languages including English, Hindi, Bengali, Tamil, Marathi, Malayalam, Kannada and Telugu to reach a larger number of moms across geographies. It works with over 75 top brands, and has long-term engagements with Nestle, Dettol, Pampers, J&J, Horlicks, and Dove amongst others.  Additionally, the company has recently launched Momspresso TV, India’s first video channel dedicated to mothers, which already boasts over 1000 videos.

To tap into its rich repository of data pertaining to moms, the platform has launched Momsights which facilitates efficient research and insights, blogger and expert advocacy, digital film production and events and activation such as bloggers meet. It has also launched Momspresso Bharat, which is India’s first digital vernacular services agency.