Home CITIES A Muslim family endears itself to temple elephants 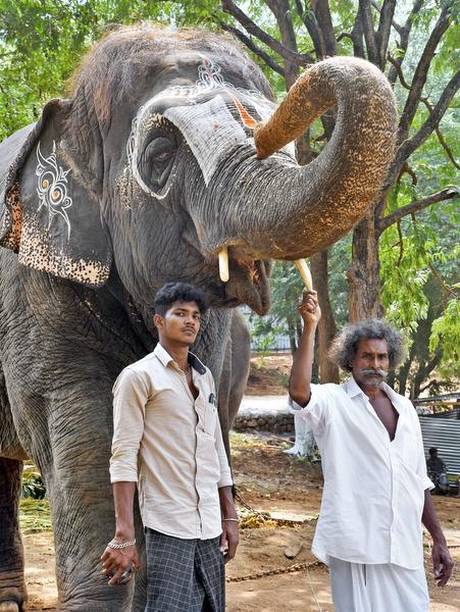 Peer Mohammed, a 21-year-old Muslim youth from Tenkasi, has completed a certificate programme in automobile engineering. However, he chose not to work with the machines. Instead, he chose the elephants.

With his father A. Kareem Sett being the mahout of Aathi Naayagi, the elephant of Aathinaathar Alwar temple of Alwarthirunagari, Mr. Mohammed left the automobile engineering field to become a mahout. Currently he is assisting Mr. Kareem as a cavadi of Aathi Naayagi, one of the elephants at the rejuvenation camp at Thekkampatti.

“Aathi Naayagi and I are of the same age, and we grew up together. I chose the profession of mahout as it gives me more satisfaction than in any other job,” he said while feeding Aathi Naayagi at the camp.

Mr. Mohammed is not alone in continuing the rare legacy of a Muslim family taking care of a temple elephant. His elder brother Abbas is the mahout of Kumudavalli, the elephant of Vaithamanidhi Perumal temple at Tirukkolur, which is also at the camp.

Abbas had worked as an air conditioning mechanic before becoming a mahout.

“The religious tag does not matter when you are a mahout. The job of a mahout demands only the rapport between the animal and the handler,” said Mr. Mohammed.

Mr. Kareem is a third generation mahout whose father and grand father had also taken care of temple elephants. “I have attended 10 annual rejuvenation camps with Aathi Naayagi. The camp, treatment and the atmosphere brings much relief to the elephants,” said Mr. Kareem.