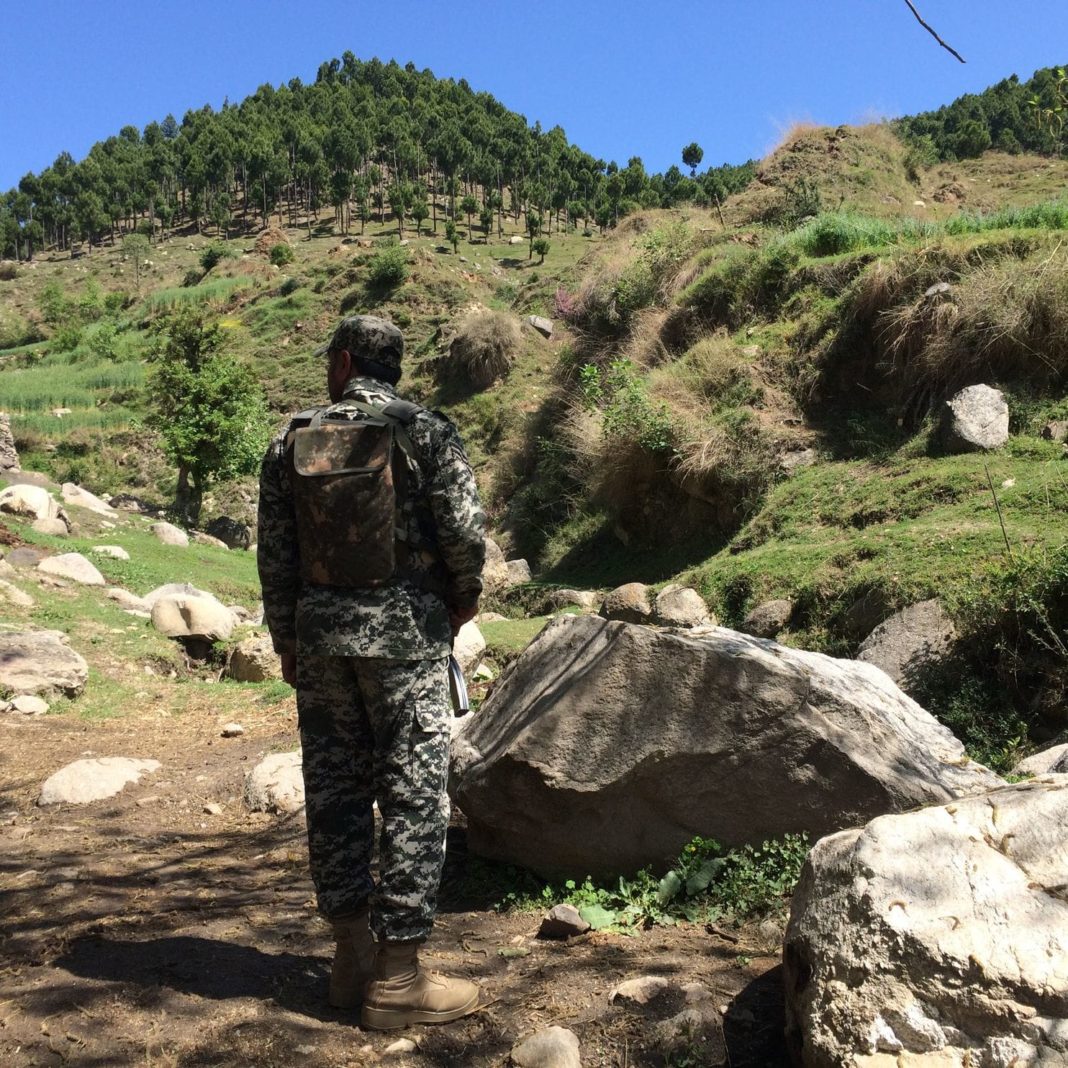 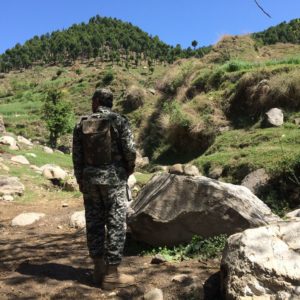 BALAKOT, Pakistan — The rocky trail to the spot where war almost broke out between Pakistan and India winds upward through alpine meadows dotted with grazing cows. In one pasture is a huge bomb crater, filled with broken boulders. Farther above, almost hidden behind the ridge crest, sits a low cinder-block building.

On Wednesday, a rhythmic hum emanated from the structure. Inside, dozens of boys huddled over wooden benches, rocking and chanting to memorize the Koran. One religious teacher recounted the night of Feb. 26, when a series of booms jolted everyone awake. An Indian military jet had just dropped four bombs nearby, according to Pakistani officials.

“It was after 3 a.m. when we heard the sounds. There was total confusion,” Mohammed Ajmar, 34, told foreign journalists. He said he had taught at the Madrassa Talim al-Koran since 2012. The visit to the remote site, arranged by the Pakistani army’s public relations office, was the first allowed since the bombing. Indian officials assert that the building was a training center for Jaish-e-Muhammad, a Pakistani militant group that claimed it carried out a Feb. 14 bombing in the nearby Indian-controlled portion of Kashmir. India said its airstrike killed “a very large number” of militant fighters at the center. Pakistan said the Indian plane missed its target, that no human was harmed, and that the building was a seminary with no other purpose.

Whatever happened on that ridge, the reverberations have continued to roil relations between the two nuclear-armed rivals as the polls open Thursday in nationwide Indian elections that could see the Hindu nationalist leader, Narendra Modi, reelected for a second term.

Pakistani Prime Minister Imran Khan, in an interview Tuesday with foreign journalists, expressed concern and sorrow over the deterioration in relations with India. He said the Modi government was unleashing domestic hostility against Muslims, a minority of more than 200 million, and that the very idea of “Muslim-ness” was under attack.

Nevertheless, Khan also suggested that if Modi were to win reelection, his “right-wing” government might be more likely to reach a settlement on Kashmir, which both countries have claimed since they were partitioned in 1947. The opposition Congress party, he said, might be “too scared” to move decisively on the issue.

The invitation for foreign journalists to interview the prime minister and military officials and to visit the site of the Indian airstrike came on the eve of the Indian elections and in the midst of a domestic economic crisis that has left Pakistan desperate for international support.

Despite Khan’s hopes for peace in Kashmir, some Pakistani and international experts have predicted that if Modi’s ruling party makes a strong enough showing, India would probably continue harsh tactics in its portion of the disputed territory, provoking more protests by Kashmiri Muslims. Modi has threatened to revoke several laws that grant Kashmiris certain special rights, such as property ownership.

“Kashmir continues to smolder and remains a nuclear flash point,” said Michael Kugelman of the Woodrow Wilson International Center for Scholars in Washington.

Last weekend, Pakistan’s foreign minister said there was “reliable evidence” that India might attack Pakistan in the next two weeks, and that it might “stage” another bombing in the disputed Himalayan territory of Kashmir to justify such military action. Indian officials dismissed the claim as “preposterous” and “aimed at whipping up war hysteria.”

Kugelman said little is likely to change if Modi is reelected. “We can expect to see the same kinds of repressive policies in Kashmir,” as well as anti-Muslim rhetoric and policies that could give Islamist militants a “pretext for attacks on India,” he said. A bomb crater in a meadow in a remote area of Pakistan, left behind after an Indian fighter jet conducted an airstrike. (Pamela Constable/The Washington Post)

Since Khan came to power, his government has taken steps to rid Pakistan of Islamist militant groups, such as the one that claimed the Feb. 14 bombing that killed 40 Indian security forces. After that attack, authorities arrested dozens of members of Jaish-e-Muhammad, though not its top leader, and began seizing financial assets and charities run by such groups. There are plans to begin “rehabilitating” former militant guerrillas, with job training and counseling.

Officials say the government has also begun working to bring Islamic seminaries under the state education system, requiring them to modernize their curriculum and register with the government. Such actions could help assuage Indian fears while complying with an international task force that has strong influence on foreign lending — and that has threatened to blacklist Pakistan in May if it does not do more to crack down on religious extremism.

Modi: ‘India will no longer be helpless in the wake of terror’

“Such is the sweep and outreach of some of these groups that one of them, namely Jaish-e-Muhammad, nearly brought two nuclear-armed South Asian countries to the brink of war,” Rustam Shah Mohmand, a former Pakistani diplomat and senior official, wrote Tuesday in an essay in the Express Tribune newspaper.

Mohmand and others expressed concern that the crackdown would soon subside, noting that previous efforts have petered out. This was largely because some militant groups enjoy wide public support, especially those that oppose India and support the cause of Kashmiri Muslims there.

Even some past skeptics, though, said Khan and the current army leadership appear to be seriously committed to implementing the proposals in a sweeping national plan against extremism that was adopted but then ignored by the previous government.

India and the United States have repeatedly accused Pakistan of continuing to harbor extremist groups, which it once nurtured to fight proxy wars in India and Afghanistan. But military officials said they now see these groups as a serious threat to Pakistan’s stability, economic development and relationships abroad.

In March, Gen. Qamar Bajwa, the chief of army staff, ordered the military to initiate a crackdown on militant groups that are banned by the United Nations. In briefings this week, Maj. Gen. Asif Ghafoor, the army spokesman, said Pakistan had fought and defeated the Pakistani Taliban, whose forces were driven from the northwest border region through military raids in 2014.

“Now that we have eliminated the kinetic threat, we want to root out extremism and the roots of terror,” he said.

Although military officials have promised to respond forcefully to any new Indian aggression, they also hinted at a possible sea change in their traditional dominance over foreign and security policy. They spoke about the importance of loyalty to civilian authority, and they echoed almost word for word several comments made by Khan.

The prime minister, in turn, spoke Tuesday of a “new consensus that there should be no armed militias” in Pakistan, and he said he had the “total support” of the army and powerful intelligence services. “We have decided, and we have the political will to act,” he said.