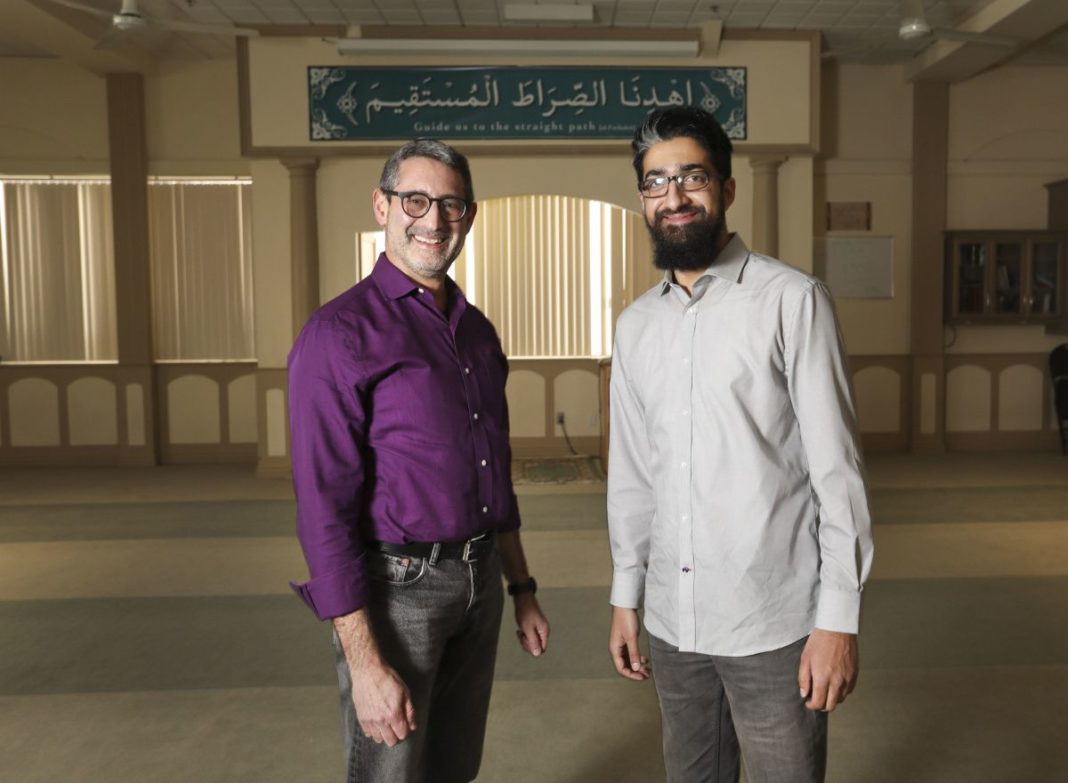 From the outside, the mosque is an unremarkable, warehouse-like building in an industrial pocket of central Mississauga. Away from city lights, a few streets down from the highway, its doors are always open, the Islamic school brimming with women and children during the day, the echoes of Arabic prayer quietly streaming in its halls.

Jeffrey Brown, an Orthodox Jew from Thornhill, spent the last day of Hanukkah there meeting with three police officers, five Muslim men, and a Muslim woman. In December, the unlikely congregation had gathered in the teal-coloured carpeted prayer hall to talk about restoring a sense of security in their places of worship.

For more than 10 years, Brown has served as a community security volunteer at his synagogue. He has developed relationships with police, created a pool of volunteer patrols, and established a security infrastructure.

He’s clear-eyed about the need for security. “People in a house of worship have to be comfortable where they are,” Brown said. “They should be able to concentrate on prayers and know if something happens, plans are in place.”

But until last year’s mass shooting at the Quebec Islamic Cultural Centre, Brown had not had any close interactions with the Muslim community.

Where a shocked nation saw the faces of the six Muslim men who were killed there, Brown saw an open and unguarded door.

“There was nothing there,” said Brown. “No one there.”

For months after the shooting, a single-shooter scenario played in Mohammed Hashim’s mind every time walked into a mosque. He imagined where a gunman would come in from, where the children would hide, where the exits were.

Hashim is a crisis manager for the Canadian Muslim community — stepping in to help whenever, and wherever, they need it. He went to Quebec City the day after the shooting to witness “everyone’s worst nightmare.”

In May, he attended a rare interfaith event for the first time. Held at Brown’s synagogue, Hashim walked through metal detectors, as people with walkie-talkies stood inside, and police cars stood outside.

“I thought it was overdone at first — whoa, it’s Thornhill, not a war zone,” said Hashim. “But then, as I started thinking about it, it felt like deterrence. There was a sense of prevention conveyed to those who seek to do harm.”

Brown said that there was chatter about protests in the lead-up to the interfaith event, so he told his police contacts and made the necessary arrangements.

“Critical to community security is knowing who to work with in the police department,” said Brown. “This requires proactive work before incidents happen. It’s a two-way street — you have to learn about the police while they learn about the community.”

At the interfaith dinner, Brown surprised Hashim by offering to share his experience with the Muslim community.

“I don’t think we could’ve gotten this level of help from anyone other than the Jewish community because I don’t think any other faith group has felt under siege as much as them,” said Hashim.

“They’re so advanced in their state of security that it’s only natural that it was someone like Jeffrey,” he said.

“It’s his job now: To teach Muslims how to do security.”

Until last year, Atif Malik had never spoken to an Orthodox Jew. When Hashim persuaded him to meet Brown, Malik hesitated. He didn’t know how to speak to someone from the Jewish community. He didn’t know how he’d react if the interaction didn’t go well, if one of them got offended.

Hashim, a big brother figure to Malik, 32, connected the two because of how similar they are. Both are members of the legal profession with a desire to help their respective communities, and to learn. Malik could be the Muslim counterpart to Brown, said Hashim.

Malik’s hometown of Mississauga has one of the largest Muslim populations in Ontario. He calls in “an incubator” that has largely insulated him from racism.

After 9/11, the mosques he attended made a conscious effort to open themselves, to ensure they remained part of the community and not boxes of seclusion. Even if there was only one person inside, the doors to his mosques were always unlocked.

All of this feels like “a conversation that should’ve happened a long time ago,” said Malik, who feels guilty that he didn’t prompt them earlier. “I question now why I didn’t make the effort to reach out and make connections with other communities, regardless of faith group,” he said. “Could we help them? Could they help us?”

He found empathy in Brown, who spoke about the same fears and complicated emotions. The Jewish community “has gone through a learning curve that we haven’t gone through,” Malik said. “Now, they’re handing us the information — here’s how you do it, if you have any questions come back to us, our doors aren’t closed. It’s mind-blowing.”

Now, they are working together on common security practices to be shared with all mosques, beginning with three in Mississauga and one in Brampton.

Neither will specify the practices being discussed or prevented, for fear of compromising their efficacy. Security is dealt with as quietly as possible, said Brown, apparent only to the person who wants to cause harm.

In this way, both men have become crisis coordinators for their communities, someone who, in the event something happened, would have police on speed dial and a response at the ready.

“Here in Canada, we have a complacency when it comes to houses of worship,” said Bernie Farber, executive director of the Mosaic Institute. “We just don’t believe something like [the Quebec mosque shooting] can happen here.”

Farber was one of the first to respond to the shooting, calling imams and volunteers like Hashim to offer his condolences and support. The former chief executive officer of the Canadian Jewish Congress oversaw security and safety for the Jewish community for 30 years, beginning in 1986.

In the 1980s and 1990s, having a security officer at large congregations of events was discomforting — an uncomfortable sign that the world had changed, and places of worship weren’t the sacrosanct sanctuaries that could be left unguarded.

Events like the Quebec mosque shooting change everything, said Farber. “The place no longer feels the way it should feel. Whether you ever regain that sense of safety, I don’t know.”

“People come to mosques to find peace, but that sanctuary was violated in the most horrific way,” said Hashim. “I think people saw that as a violation of one of our most basic provisions and rights, which is the right to practice freely and safely.”

Watching and facilitating the Muslim and Jewish community come together with police organisations to try and regain a sense of safety, however, has been a unique experience for Farber and Hashim. “I suppose between every bleak, dark avenue there is a pinpoint of light, said Farber. “This terrible tragedy brought together two communities that are united by hateful acts against them.”

Such acts can be deadly, as the Quebec mosque shooting, or just a series of less threatening acts: Putting bacon on a mosque’s door handle. Carving swastikas onto a synagogue. Graffiti of hateful messages.

Rabbi John Moscowitz, who also reached out to imams in the wake of the shooting, believes that social bonds constitute a different type of security. “When you can trust people of different faiths from you and stand together in the wake of something like the mosque attack, it deepens relationships,” he said. “And that deepens the bonds of trust, commonality and brotherhood.”

“Sometimes security feels less secure because you’re aware of why security is there” said Moscowitz. Community bonds, he added, are an “antidote to loss of faith” that heal.

At that first conversation in Mississauga, the unlikely group of one Jew, six Muslims and three police officers shook hands and promised that the conversation would continue.

“Both our faiths and our country demand a sense of respect and friendship amongst peoples,” said Hashim, “and I don’t think I witnessed that so clearly as I did that night.”

“This is about new communities getting established and getting comfortable,” said Brown. “We too were once strangers in a strange land.”

“When we had that meeting, we felt God’s presence.”