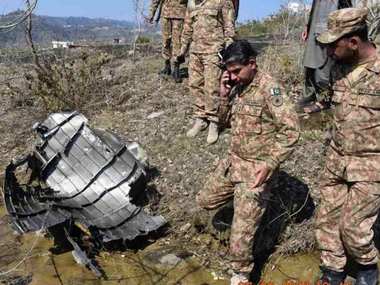 New Delhi: Even as Wing Commander Abhinandan Varthaman walked across the India-Pakistan border on 1 March, a family in Pakistan is in mourning — silent, blacked out from the public view, their sacrifice unacknowledged. Pakistan Air Force Wing Commander Shahaz-ud-Din, the F-16 pilot shot down in a dogfight over the Nowshera sector, is reported to have been lynched by a mob who mistook him for an Indian airman.

Both men, in one of those strange twists history revels in, come from illustrious military families: Wing Commander Varthaman’s father, S Varthaman, as Air Marshal; Shahaz-ud-Din’s father, Waseem-ud-Din, is also an Air Marshal of the Pakistan Air Force, who has flown F-16 and Mirages. Remains of the Pakistan which crashed on 28 February. ANI

The two sons engaged each other in the air; one was taken a prisoner of war and has returned home, while the other was killed by his own people.

The goddess of war, it is said, is fickle with her favours — but few twists of fate exist in the annals of history to match this one.

The news that Shahaz-ud-Din’s plane was shot down was first reported by London-based lawyer Khalid Umar, who says he received it privately, from individuals related to the F-16 pilot’s family.

Umar’s account says that Shahaz-ud-Din parachuted out of his aircraft safely, but was then attacked by a mob after the F-16 crash-landed — possibly in the Laam valley, stretching out westward from Naushehra into Pakistan-occupied Kashmir. Shahaz-ud-Din, Umar has claimed, was hospitalised, but succumbed to his injuries.

The PAF Wing Commander flew for the 19 Squadron, also known as the ‘Sher-Dils’, who served with distinction in the war of 1965 and 1971.

Pakistani military spokesperson Major-General Asif Ghafoor had asserted, on the morning of 28 February, that two Indian jets had been shot down and two Indian pilots injured — one of whom was in army custody, and the other in the hospital.

Later in the evening, Major-General Ghafoor stated that only one Indian pilot was in Pakistan Army custody, without explaining his earlier comments.

“It’s extremely improbable the Pakistan Army just made up the second plane and pilot,” an Indian military source says. “The more likely explanation is that troops were unable to identify the destroyed aircraft or the battered, broken body to be their own. There was probably miscommunication up the chain of command.”

In the 1999 Kargil War, Pakistan had denied its troops were involved — leading to protests in Pakistan’s northern areas, from where the Northern Light Infantry is drawn.

Eleven years after the Kargil War, Pakistan’s army officially acknowledged its role, naming 453 soldiers and officers killed in the 1999 conflict. Captain Karnal Sher and Havildar Lalak Jan, who were both killed on 7 July, 1999, were awarded Pakistan’s highest honour, the Nishan-e-Haider, but were not acknowledged as Kargil war casualties until November 2010.