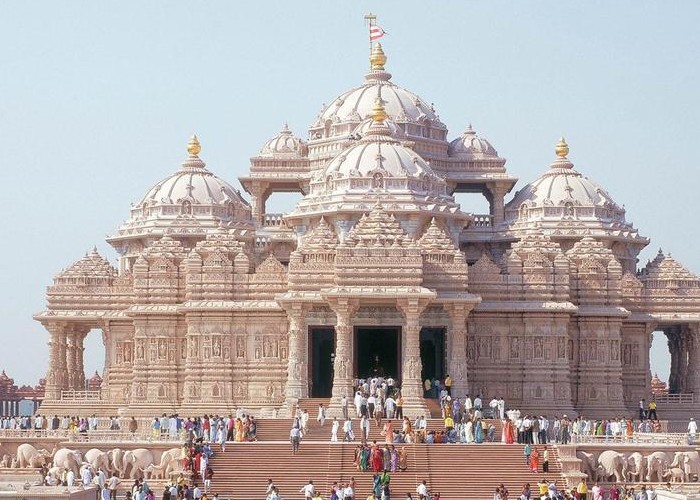 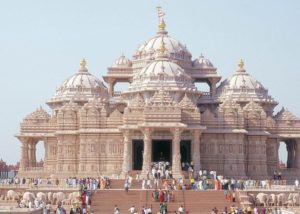 Abu Dhabi, Feb 12, 2019: Thousands of worshippers from across the Middle East and beyond will turn out in celebration as the foundations are laid for the UAE’s first traditional Hindu stone temple.

The foundation stones ceremony for the shrine in Abu Dhabi will take place on April 20, launching the countdown to the start of work on the 10.9-hectare site this year.

The ritual of shilanyas – or foundation laying – will involve the stones being blessed by Hindu priests.

The ceremony will be held at the site in Abu Mureikha, near Al Rahba, by Baps Swaminarayan Sanstha, the religious and social organisation building the shrine.

“The shilanyas ceremony is a sacred Hindu ritual where the first foundation stones are sanctified and fixed in the ground as the base of the mandir [temple],” said Swami Brahmavihari, a senior Hindu priest responsible for international relations at the Baps Swaminarayan Sanstha.

“The mandir’s foundations will be on these sacred stones.”

Mahant Swami Maharaj, the spiritual leader of the group, will preside over the ceremony and representatives from the UAE will attend, he said.

Worshippers will be encouraged to sprinkle flowers as part of prayers on the site from 2pm at the ceremony.

The organisation said that people will be able to register to attend the event from next week, by visiting the temple website, www.mandir.ae

People can also email outreach@mandir.ae for information about how they can contribute to building the temple.

Ahead of the foundation stone ceremony, prayers will be held in Dubai for 12 days from April 18. The location in Dubai will be announced later on the temple’s website.

Construction work will begin soon after the foundation is laid. Architects have selected the material for intricate hand carvings that will be a distinctive feature of the shrine.

Marble from Macedonia has been chosen and will be sent to sculpting sites in western India for craftsmen to begin work.

Pink sandstone for the pillars and outer structure was selected from the state of Rajasthan.

The final design is being worked on for the temple that will showcase seven spires, to represent each emirate of the UAE.

The temple will be built according to ancient Sanskrit scriptures and its elaborate engravings will be inspired by nature.

Once the carvings are complete, tonnes of sandstone and marble will be shipped to the UAE to be assembled on site.

The organisation thanked the UAE government for recently granting additional land to the temple for parking space.

“The love and kindness shown by Sheikh Mohamed bin Zayed, the Crown Prince of Abu Dhabi, and the UAE government, cannot be expressed in words. Time and time again they have encouraged us and gone out of their way to aid us on this project,” Swami Brahmavihari said.

“To ensure the temple premises can serve the Hindu and wider community effectively, they have graciously given an additional 13.5 acres of land for parking purposes.”

Government licences to raise funds from the community were obtained last year by Mandir Limited, a company registered to build and manage the shrine, that will be located off the highway between Dubai and Abu Dhabi.

Local experts and international consultants have helped to devise the layout of the temple, that will also include a cultural complex to welcome people of all faiths and nationalities.

The temple space will boast a visitors’ centre, exhibition and prayer halls, sports and play areas for children, gardens, a food court, books and gift shop.

The temple planners have said the shrine will promote harmony between the people of the UAE and India and foster humanitarian values.

The BAPS Swaminarayan Sanstha manages about 1,200 temples in India, the US, UK, Canada, Australia and Africa.

The temple is a key part of efforts to promote interfaith harmony in the UAE. Swami Brahmavihari was one of the speakers at the Global Conference of Human Fraternity.

As part of the historic visit to the country by Pope Francis and the Grand Imam of Al Azhar, Dr Ahmed Al Tayeb, it was announced that a new mosque and church are to be built in Abu Dhabi.