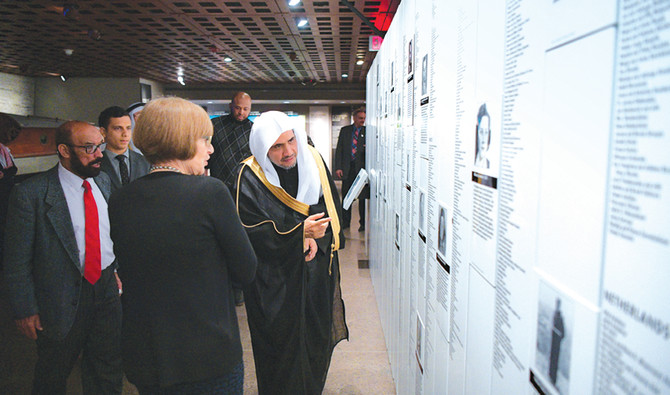 JEDDAH/DUBAI: For decades after they marched into the Auschwitz-Birkenau death camp in Poland on Jan. 27, 1945, Soviet soldiers had nightmares about what they found.

They liberated more than 7,000 prisoners, most of them ill and dying, but by then the Nazis had already murdered 1.3 million people in that camp alone — and 17 million in total, of whom 6 million were Jews. Yet to this day, there are those who deny that the Holocaust happened. Now, in a powerful intervention on International Holocaust Remembrance Day, one of the world’s leading Muslim thinkers has spoken of how corrosive that denial is.

He denounced those who deny the Holocaust, saying this serves to drive new hate-fuelled ideologies and antisemitism.

The MWL “and the Islamic peoples under it denounce all the killing of innocents and the violation of the inviolability of the Holocaust,” he said. “The followers of the Jewish religion… have a distinctive position in Islam with the Christians. We and they are descendants of Abraham and believe in one God,” he added.

“He who denies the Holocaust seeks to repeat it… Rational human beings must unite and work together to restrain the advocates of murder and extermination, otherwise the lessons of history won’t be useful.”

Al-Issa, who is also president of the Makkah-based International Organization of Muslim Scholars, spoke to Arab News following a widely circulated article in the Washington Post, in which he said denying the Holocaust “has only helped those who continue to perpetuate hateful ideas of racial, ethnic or religious purity, such as the genocidal killers of the Rohingya people in Myanmar.”

He added: “For decades… some have chosen not to see what really happened wherever the Nazis and their henchmen wielded power. Instead, they deny the horrors of a diabolical plan to implement a hateful idea of racial purity that ultimately led to the murder of millions of innocent men, women and children — including 6 million Jews.” He said: “The lessons of the Holocaust are universal, and Muslims around the world have a responsibility to learn them, heed the warnings and join the international commitment to ensure ‘never again’.”

Last year, Al-Issa wrote an open letter to Sara Bloomfield, director of the US Holocaust Memorial Museum, saying “true Islam” classifies the crimes of the Holocaust “in the highest degree of penal sanctions and among the worst human atrocities ever. One would ask, who in his right mind would accept, sympathize, or even diminish the extent of this brutal crime?” He said: “I received a flood of calls, text messages, emails and letters from Muslim religious scholars endorsing the view I’d expressed. Not a single reputable scholar has stood up to oppose this view. None could dispute the indisputable.” It led to Al-Issa’s visit last May to the Holocaust Memorial Museum in Washington, which he describes as “one of the most powerful and moving experiences of my life.”

He has urged all Muslims to learn the history of the Holocaust and to teach its lessons to their children.

“As adherents to a faith committed to tolerance, coexistence and respect for the dignity of all mankind, we share a responsibility to confront those who would carry Adolf Hitler’s torch today, and to join hands with people of goodwill of all nations and faiths to prevent genocide wherever it threatens innocent lives,” he said.

“We can only do this if we’re armed with the truth. We Muslims share the sentiment expressed by (Holocaust survivor) Elie Wiesel in the words engraved… on the walls of the Holocaust Museum: ‘For the dead and the living, we must bear witness.’ As the Holy Qur’an commands, ‘O you, who believe, be upright for God and be bearers of witness with justice’.”

Andy Hollinger, the museum’s director of communications, told Arab News: “The museum believes the Holocaust holds lessons for all peoples. It shows the lasting dangers of hatred and antisemitism. It teaches us about the immutability of human nature and how we’re all susceptible to these threats.” He said: “We remember the Holocaust not just to honor the dead, although that’s important, but to ask ourselves how such an event could’ve occurred, and what responsibilities we have to ensure we don’t repeat the failings of the past.” Yet more than seven decades later, a disturbing level of Holocaust denial remains. According to a survey released last week by Opinion Matters for the Holocaust Memorial Day Trust (HMDT), 5 percent of UK adults do not believe that the Holocaust took place, and one in 12 believes its scale has been exaggerated.

The poll of more than 2,000 people also found that almost two-thirds of respondents could not say how many Jews were murdered, or “grossly” underestimated the number.

The HMDT’s chief executive, Olivia Marks-Woldman, said: “Such widespread ignorance and even denial is shocking. Without a basic understanding of this recent history, we are in danger of failing to learn where a lack of respect for difference and hostility to others can ultimately lead.”

A poll carried out in the US last year by Schoen Consulting found that 11 percent of American adults and 22 percent of millennials had not heard of the Holocaust, and almost a third of Americans and four out of 10 millennials believed that 2 million Jews or fewer were killed. Nearly half the adults and millennials could not name a single Nazi concentration camp, while about four-fifths of Americans had never visited a Holocaust museum.

The survey’s authors said people who lack basic knowledge about the Holocaust are susceptible to cynical campaigns by neo-Nazis and xenophobic nationalists and regimes such as Iran’s, which often use social media to deny the Holocaust or mock its victims.

In 2016, the Iranian regime played an active role in denying the Holocaust, exhibiting more than 150 cartoons that denied or mocked it at the state-run Islamic Propaganda Organization in Tehran. The organization then sponsored exhibits of cartoons in provincial capitals across Iran.

At the time, Tad Stahnke, director of the US Holocaust Memorial Museum’s Initiative on Holocaust Denial and Antisemitism, said the Iranian state had a “long-standing pattern of promulgating Holocaust denial on a global stage, which incites violence, promotes hatred, and stokes antisemitism.”

Karen Pollock, chief executive of the Holocaust Educational Trust, spoke out last week against those who deny the Holocaust. “One person questioning the truth of the Holocaust is one too many,” she said. “It is up to us to redouble our efforts to ensure future generations know that it did happen and become witnesses to one of the darkest episodes in our history.”

On Sunday, survivors, politicians and members of the public worldwide delivered messages of remembrance to the Holocaust’s victims, with Pope Francis tweeting: “Let us not forget the victims of the Holocaust. Their unspeakable suffering continues to cry out to humanity.”

British Prime Minister Theresa May wrote last week in the Book of Commitment at the Holocaust Educational Trust in her country: “No words can ever do justice to the six million who were so cruelly murdered in the Holocaust but we can pay a fitting tribute through our deeds today. In a world where hatred of others is becoming increasingly commonplace, we can choose to stand as one against those who peddle it.” She added: “At a time when Jews are being targeted simply because of who they are, all of us of any faith can come together in their defence… We can once again commit ourselves to remembering those who were murdered, and to ensure that such a human catastrophe is never permitted to happen again.”

The theme of this year’s International Holocaust Remembrance Day is “Demand and Defend Your Human Rights.” It aims to encourage young people to learn from the lessons of the Holocaust, act against discrimination and defend democratic values in their communities, at a time when the spread of neo-Nazism and hate groups is fueling antisemitism and other forms of hatred worldwide.