Home CRITICLES How to downplay the internationalisation of the Kashmir issue? 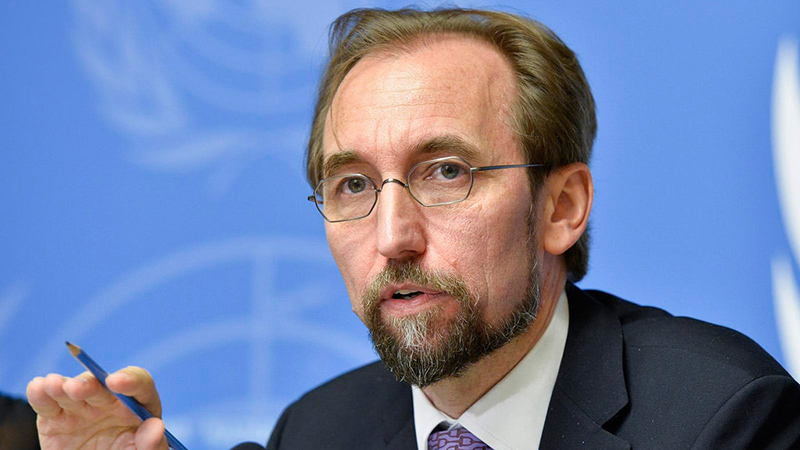 By calling for an “independent, impartial and international mission” into reports “claiming the Indian authorities had used force excessively against the civilian population under its administration”, UNHRC chief Prince Zeid Ra’ad Al Hussein may have surreptitiously sought to internationalise what essentially is an internal matter of this country. It has remained a bilateral issue since the Shimla Accord of 1972.

Just about a decade or less since its inception, the UNHRC too has not bothered about the human rights violations that Pak-inflicted cross-border terrorism festers. In doing so, the HR body has chosen to leave it to the UN parent to handle it all, mostly as a political issue with ‘terrorism’ and more traditional security concerns, on a non-HR plane. There are of course other issues and circumstances elsewhere, where the UNHRC too has taken an active interest on aspects of state-sponsored terrorism across the border.

It’s one thing for the UNHRC to talk about allegations of human rights violations in Jammu and Kashmir. On this, successive Indian governments have clearly drawn the line, both during and pre-UNHRC years. Even on the US-sponsored UNHRC resolutions on allegations of ‘war crimes’ and ‘accountability issues’ in neighbouring Sri Lanka, for instance, India took a steadfast line against ‘international’ investigations that were independent of the consent of the host-nation. It was not opposed to ‘impartial, internal’ probe, instead. When the line was breached, India abstained from the UNHRC Council vote.

Jammu and Kashmir is an integral part of India, and India is a leading member of the UN, UNHRC and such other affiliates. If Prince Zeid and/or UNHRC had anything to say about the recent ‘pellet deaths’, etc, his inaugural speech for the ongoing September session should have referred to the population of J&K, and the governments at the Centre and in the State in India. Instead, he referred to reports “claiming the Indian authorities had used force excessively against the civilian population under its administration” (italics added).

Vikas Swarup, the spokesperson of the Ministry of External Affairs (MEA), promptly and unequivocally denied the UNHRC’s claim/charge. “Terrorism is the grossest violation of human rights,” and there was no comparison between PoK and Jammu and Kashmir, news reports quoted him as saying.  There is no comparison between J&K and PoK in matters of cross-border terrorism. There can be no comparison between the two, in politico-diplomatic contexts, either.

True, India did take the ‘Kashmir issue’ to the UN decades ago. That was when the world was still recovering from the violence and trauma of the two Wars. Post-Independence, India was still innocent. Jammu and Kashmir had merged in the Indian Union on its own volition, under a legally valid ‘Instrument of Accession.’

The merger was forced by a Pakistani invasion, in the form of infiltration, and not by India. This idea of ‘invasion through infiltration’ would become a patented Pakistani practice, and would be seen in 1965 and later on during the ‘Kargil War.’ In 1948, Pakistan was the invader of the Indian territory. It continues to ‘occupy’ a part of what then the legitimate ruler of Jammu and Kashmir had legally acceded to India. PoK is a part and parcel of India, then as it’s now, in legal and constitutional terms.

It’s anybody’s guess what the UNHRC/UN agenda is just now, even going beyond its purported ‘human rights concerns’ pertaining to J&K. But by drawing a parallel between Pakistan allowing an ‘international mission’ to PoK and India not accepting it, Prince Zeid has done enough damage already. Future UNHRC references, possibly followed by the UN later on, could build on the present text variously, and that’s it.

India and Indians need only to recall how UN Secretary-General Ban Ki-moon had explained away the three-man ‘Darusman Commission’ on Sri Lanka as an internal office inquiry for his benefit. Later on, Ban did stamp the UN seal on the report, and sent it to UNHRC. The latter, as may be recalled, used it as the basic document on which the US and allies drew upon while drafting their resolutions. In between, there were two successive leaks of the ‘internal reports.’ interim and final, but no one asked any questions.

It would not stop there at the UNHRC, where NGOs have some say along with legitimate state actors. It would thus require only an NGO or two to active demands for a ‘HR probe’ in J&K, and it could well acquire a momentum of its own. It did in the case of Sri Lanka, and there is no knowing why it should not happen in the case of India too. Maybe, there could be some solace, or vicarious satisfaction, that Pakistan too could be riled likewise. That’s not India’s case, all along.

In the post-Cold War era, the US has emerged as a friend and ally of India. Compared to the US initiatives viz governments and armies like those of Sri Lanka, among others, Afghanistan, Iraq and Guantanamo Bay all are post-Cold War evidence to American uni-polarity stretching to cover HR issues as well. India needs to await American reaction to Prince Zeid’s observations.

In international diplomacy, speech is silver and silence is golden. In most cases, including Sri Lanka’s, the US approach on ‘accountability issues’ began only through motions of silence. What more, in the post-Cold War era, the US has also arranged to itself the role of international policeman even on issues of human rights charges.

The US has also learnt to comfortably differentiate between strategic partnerships and HR concerns vide third nations, based on its own perceptions of ‘supreme national self-interest’. It’s another matter if the UN or any of its affiliates would say or do anything that the US would frown upon. This apart, the UNHRC seems to have been a well thought-out creation of the West, to create a forum where the Security Council kind of ‘veto’ votes would hold.

Drawing parallels does not stop with Prince Zeid. This season, for instance, Prime Minister Narendra Modi might have flagged the process by talking about Balochistan in his Independence Day address from the ramparts of the Red Fort. India has spoken in the same vein since. Predecessor governments had avoided bringing in Balochistan in bilateral political discourse and/or international terrorism talks — and possibly, not without reason.

In context, subsequent news reports about the Government of India purportedly considering grant of ‘political asylum’ to Balochis and public sector All India Radio launching media and mobile apps on the short-wave accessible in the Pakistani state of Balochistan can complicate India’s bilateral relations with that country than solving any. Conversely, it could provide background score to long-term Pakistani charges of Indian intervention in Balochistan, which had fallen on deaf international ears in the past.

The question is if in the future India would go beyond its current charges on human rights front vis a vis Balochistan and Pakistan’s federal Government and agencies. If nothing else, since Independence, Pakistan has continued to claim that ‘Kashmir is an unfinished agenda of Partition.’ By talking about Balochistan in near-similar vein, if not the very same way, India can end up helping Pakistan to open up yet another Pandora’s Box, which is more complex and complicated than the ‘Kashmir issue.’

On the UNHRC front, it could mean Pakistan being able to open two fronts, instead of one, against India — J&K and also Balochistan, where it could also accuse India of aiding ‘anti-nationals’ and ‘terrorists’, more virulently than on a few occasions in the past. This comes at a time when India’s charges of on Pakistan-sponsored cross-border terrorism have found greater traction with the rest of the world than at any time in the post-9/11 past. It’s another matter that India’s current Balochistan-centred talks relate to Pakistan State’s ‘human rights violations’ in that part of that country.

Likewise, Pakistan’s encouragement for political separatists from Jammu and Kashmir should not be the guiding-principle for India’s decision on granting political asylum to Balochis. First and foremost, India is a much larger and bigger country. India has to demonstrate its political, regional and global power and reach in more meaningful ways, in form and content, not waste its energies and national pride in such tit-for-tat exercise.

In context, India needs to draw a parallel about the future course on this score with the grant of political asylum to the Dalai Lama. It’s not even about the reigning Dalai Lama, who came to India under historic circumstances. It’s as much about the possibility of India granting recognition and possible political asylum to his successor(s), that too when the incumbent has confined their future roles only to religious functions, and not political activities.

Art of the possible

Even in the post-Cold War global geopolitical environment, there is nothing to suggest that the world has forgotten the Shimla Accord provision that commits Pakistan to resolving all bilateral issues bilaterally. The Accord was valid under certain ground realities, post-Bangladesh War. At least, India had not thought of Pakistan-sponsored cross-border terrorism. But it had definitely considered then and since about Statehood, including that of the newly-founded Bangladesh, and attendant political realities.

By adding Balochistan to the milieu, India should not end up giving an opportunity, not just to Pakistan, but to the international community, too, for surreptitious entry into what still remains a bilateral issue in South Asia. The same should apply to suggestions on India’s equations and relations with SAARC in the Pakistani context. Again, it could cause more problems than solving any, or many.

Diplomacy is the art of the possible at best, and deadlock, at times. It should pave for simplifying existing problems to levels that become manageable for a continuous time and solvable at an appropriate time. Anything more could sell at home, not in the international market-place, where alone it would matter under the circumstances.