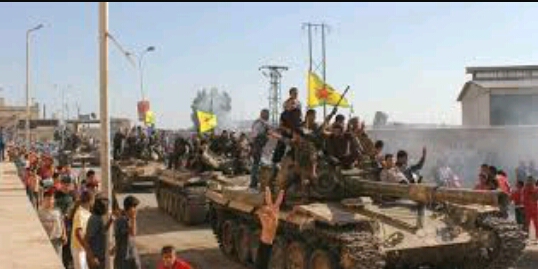 DAMASCUS, Jan. 10 — Hundreds of Turkey-backed rebels are expected to leave their positions to the al-Qaida-linked militants in northern Syria within the next 24 hours, a war monitor reported on Thursday.

The fighters allied with the National Liberation Front (NLF) are expected to leave their areas to the Hayat Tahrir al-Sham (HTS) in the province of Idlib in northwestern Syria and the countryside of Hama province in central Syria, said the Syrian Observatory for Human Rights.

The Britain-based watchdog group said the withdrawal is part of a deal reached a day earlier between the rival rebel groups in that part of the country.

The areas controlled by the two operations are located in the northern and northwestern countryside of Aleppo province in northern Syria.

The deal between both sides comes on the heels of the wide-scale campaign of the HTS, which is the umbrella group of the al-Qaida-linked Nusra Front, against the Nour Al-Din Al-Zenki group, which is allied with the NLF, in the western countryside of Aleppo.

The developments cast doubts on the future of the demilitarized zone’s deal established by Turkey and Russia last September as the areas that are witnessing rebel-on-rebel fighting are included in the deal.

According to the Turkey, Russia-backed deal, the HTS should have withdrawn from the demilitarized zones which didn’t materialize; on the contrary, the group is expanding on the expense of the Turkey-backed rebels.