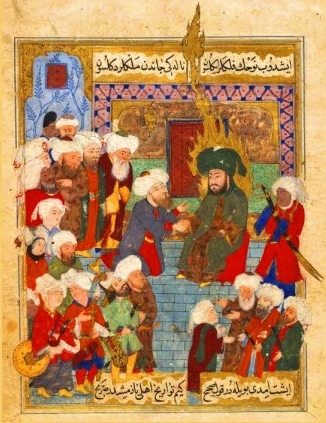 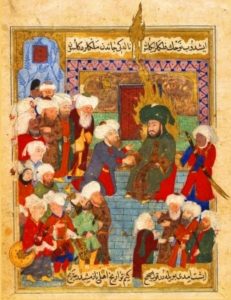 We now live in the era of Trump and Putin. Against the background of the current political reality it is interesting to read the famous letter of Ali ibn Abi Talib, fourth caliph of Islam, in which he instructs the newly appointed Governor of Egypt on how to run a state. So often he uses words as ‘kindliness’, ‘love’, ‘sincerity’ and ‘affection’. Words which very few politicians would use nowadays. Below are excerpts from this letter, as well as a link to the entire letter.

‘Develop in your heart the feeling of love for your people and let it be the source of kindliness and blessing to them.’

‘Should you be elated by power, ever feel in your mind the slightest symptoms of pride and arrogance, then look at the power and majesty of the Divine governance of the Universe over which you have absolutely no control. It will restore the sense of  balance to your wayward intelligence and give you the sense of calmness and affability.’ 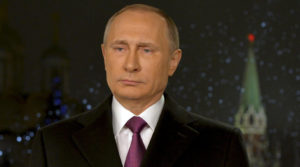 ‘Maintain justice in administration and impose it on your own self and seek the consent of the people, for, the discontent of the masses sterilises the contentment of the privileged few and the discontent of the few loses itself in the contentment of the many. Remember the privileged few will not rally round you in moments of difficulty: they will try to side-track justice, they will ask for more than what they deserve and will show no gratitude for favours done to them. (…) They will feel restive in the face of trials and will offer no regret for their shortcomings. It is the common man who is the strength of the State and Religion. It is he who fights the enemy. So live in close contact with the masses and be mindful of their welfare.’

‘Keep at a distance one who peers into the weaknesses of others. After all, the masses are not free from weaknesses. It is the duty of the ruler to shield them. Do not bring to light that which is hidden, but try to remove those weaknesses which have been brought to light. God is watchful of everything that is hidden from you, and He alone will deal with it. To the best of your ability cover the weaknesses of the public, and God will cover the weaknesses in you which you are anxious to keep away from their eye.’

‘Do not make haste in seeking confirmation of tale-telling, for the tale-teller is a deceitful person appearing in the garb of a friend.’

‘Do not disregard the noble traditions established by our forbears, which have promoted harmony and progress among the people; and do not initiate anything which might minimize their usefulness. The men who had established these noble traditions have had their reward; but responsibility will be yours if they are disturbed.’

​’Remember that the people are composed of different classes. The progress of one is dependent on the progress of every other, and none can afford to be independent of the other’

‘He who does not realise his own responsibilities can hardly appraise the responsibilities of others.’ ‘Beware! Fear God when dealing with the problem of the poor who have none to patronise them, who are forlorn, indigent, helpless and are greatly torn in mind – victims of the vicissitudes of time. Among them are some who do not question their lot in life and who, notwithstanding their misery, do not go about seeing alms. For God’s sake, safeguard their rights, for on you rests the responsibility of protecting their interests.

President Donald Trump Photo Newsweek
​Do not treat their interests as of less importance than your own, and never keep them outside the purview of your important considerations, and mark the persons who look down upon them and of whose conditions they keep you in ignorance. Select from among your officers such men as are meek and God fearing who can keep you properly informed of the condition of the poor. Make such provision for these poor people as shall not oblige you to offer an excuse before God on the Day of Judgement for, it is this section of the people which, more than any other, deserves benevolent treatment.’

​’Seek your reward from God by giving to each of them (the poor) what is due to him and enjoin on yourself as a sacred duty the task of meeting the needs of such aged among them as have no independent means of livelihood and are averse to seek alms. The discharge of this duty is what usually proves very trying to rulers, but is very welcome to societies which are gifted with foresight. It is only such societies or nations who truly carry out with equanimity their covenant with God to discharge their duty to the poor.’

‘For I have heard the prophet of God say that no nation or society, in which the strong do not discharge their duty to the weak, will occupy a high position.’

‘I enjoin on you not to succumb to the prompting of your own heart or to turn away from the discharge of duties entrusted to you.’
​
‘I seek the refuge of the might of the Almighty and of His limitless sphere of blessings, and invite you to pray with me that He may give us together the grace willingly to surrender our will to His will, and to enable us to acquit ourselves before Him and His creation, so that mankind might cherish our memory and our work survive.’