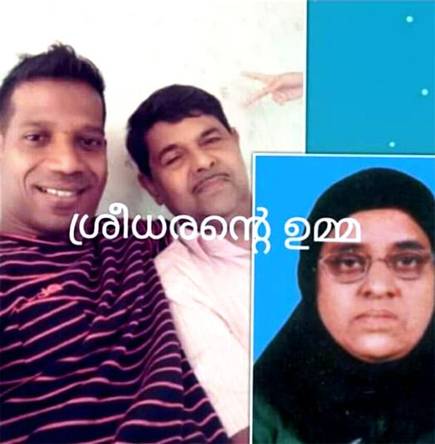 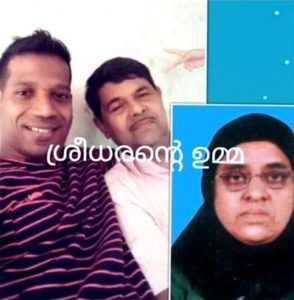 The death of an old woman at Kalikavu in the district has left behind a tale of human love that cut across religion and other parochialism.

Thousands of people on the social media are today celebrating that human love which has touched many a heart and brought tears from many an eye.

The death of Subaida Thennad on Tuesday last would have gone unnoticed by anyone outside her village if her foster son, Sreedharan, had not put up a Facebook post saying “my Umma (mother) has honoured the summons of Allah. Please pray for her soul.” The 46-year-old’s post opened a flurry of comments and discussions, unravelling one of the sweetest stories of religious harmony from the land of Mapilas.

The pious Muslim couple Subaida and Abdul Azeez Haji fostered Mr. Sreedharan and his elder sisters Ramani and Leela from the day their mother Chakki died. Sreedharan was hardly one year old then.

They grew up in Subaida’s house practising Hindu rites along with three of her Muslim children. In the mornings, three of them went to the temple and the other three to the madrasa. In the evenings when three of them sat down to read Quran, the other three with folded hands prayed to their Bhagwan.

“Our foster parents brought us up like their own children and educated us. They got my sisters married off. Though we were taken in at an impressionable age, they never tried to convert us. For us, she is no foster mother; she is our own mother,” said Mr. Sreedharan in his FB post.

News of Subaida’s death shattered him. He sat crying in his room in Oman, holding bottles of perfume he had bought for his beloved. He chose not to rush home as he lacked courage to see her lifeless body. He wept and prayed for her.

“If there is heaven, Subaida is sure to be found there,” said A.P. Ahamed, social worker and orator. “In these days of forced conversions and religious fundamentalism, such paragons of goodness have to be celebrated,” he said.

Mr. Ahamed is planning an all-party meeting at Kalikavu to commemorate Subaida . “I’m sure such instances will help reduce the gulf between the secular and those who follow different faiths,” said Mr. Ahamed.