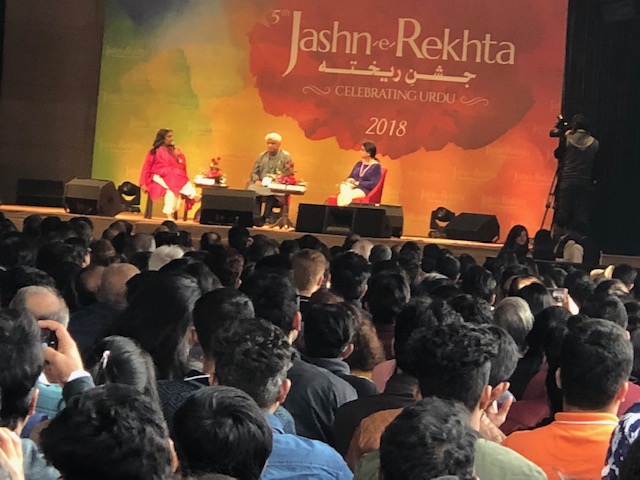 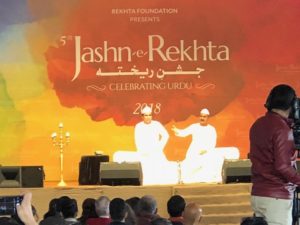 In my recent vacation in India I attended a unique 2-day cultural festival called “Jashan Rekhta” in New Delhi on December 15, 16 at the National Stadium.  The event is being organized every year for the last five years by the Rekhta Foundation headed by Sanjay Saraf, a New Delhi businessman.  While the core theme of the event is Urdu language and its culture of a composite multi-religious, multicultural society, it makes a huge effort to make artists, speakers and the audiences from Hindu, Muslim, Sikh, Christian communities to participate in equal numbers, thereby promoting India’s basic composite multi-religious society.

In its various sessions spread over two days the event presented well known authors, poets, moviemakers, ghazal-qawwali-sufi music singers as well as folk singers from various north-Indian regions.  In addition to typical Muslim cultural items like mushaira, qawwali, ghazal, sufi music, icons of Hindu culture like Ram Kahani – a rendering of Ramayana in Urdu, and Kabir Kahani – a nugget from the Bhakti movement of medieval India, were presented in equal measure.

The over-riding flavor of the event, though loaded with Urdu and north Indian Muslim culture, wasthe warm atmosphere of friendship and commonality among men and women from different religious communities and the presence of a substantial number of young, under-40 people.  This cultural festival has built such a reputation that a good number of people in the audience were NRIs and visitors from other Indian cities.

The inter-faith cultural bon-homie in the 3,000 strong audience was so pervasive that as I wasreturning home from the event by the Delhi metro, I said to myself “ Who says Hindu-Sikh-Muslim-Christian friendship is dead in India”.  This in the face of the bad news we often receive of Hindu-Muslim tensions and problems in various Indian cities.

All of us have to work harder to support such positive events and debunk the selfish politicians and the sensationalist TV media in India that divide us by propagating distorted precepts of religion, cow and medieval Indian history.

Indeed, India’s composite and tolerant Hindustani culture is what is in our bloodstream and what wegrew up with.  I doff my hat off in respect for the Rekhta Foundation and such other groups that promote such positive cultural and social events to bring people together.