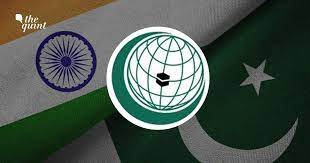 The Organisation of Islamic Countries (OIC) grabs media headlines in India rarely, except when it issues a statement on Jammu and Kashmir (J&K). The 57-member organisation comprises Islamic countries which include India’s neighbours Bangladesh, Maldives and Pakistan.

The OIC’s declared goal is to protect the interests of the Muslim world, in a spirit of harmony with other peoples for the promotion of peace and harmony. Lofty words, similar to the noble cause of international peace and security that is the goal of the UN.

The fact remains that the OIC is an organisation of Islamic countries and hence is seen as a ‘communal’ institution in the Indian discourse.

India has had a rocky relationship with the OIC, ever since it was invited and then not allowed to participate, in the first OIC Summit in Morocco in 1969, in the face of opposition by Pakistan.

After the 47th annual meeting in Niamey, the capital city of Niger in central Africa, the OIC’s Council of Foreign Ministers, issued a statement on J&K, provoking a strong response from India.

The OIC’s statements on J&K are issued at the instigation of Pakistan, whenever it has a high-level meeting.

Most member countries want to avoid any bruising argument and do not object, since they know that such statements have no substantive impact. This time, J&K was not even included on the agenda which riled Pakistan, and it worked overtime to beg and plead with Saudi Arabia and others to get the statement out of the OIC.

India has always rejected such statements and this time too it has castigated the OIC, for having no locus standi in India’s internal matters.

The Indian statement blamed the OIC for making unwarranted references and asserted that J&K remains an integral and inalienable part of India. Referring obliquely to Pakistan, India’s statement said that the OIC is being used by a country “which has an abominable record on religious tolerance, radicalism and persecution of minorities” and said that the organisation should refrain from making such references in future. India has also lambasted Pakistan’s state-sponsored terrorism at the meeting of the Shanghai Cooperation Organisation (SCO) held this week and hosted by India.

Has Pakistan Managed To Ruin India’s Ties With OIC Countries Over J&K Issue?

Of late, Pakistan has been struggling to attack India on the issue of J&K in international fora, a policy it has pursued for decades. Pakistan has redoubled its efforts after the revocation of Article 370. At the UN, Pakistan, backed by China, has failed to move the UNSC and has been shouting hoarse on violation of human rights of Kashmiris. At the OIC foreign minister’s meeting in Abu Dhabi in 2019, India’s External Affairs Minister, Sushma Swaraj was invited as a guest of honour, leading to much frustration in Pakistan and a boycott of the plenary session by the Pakistani foreign minister, where Swaraj delivered her address. Pakistan had tried its best to get Swaraj disinvited but failed to do so.

While the OIC’s statements on J&K are treated as a ritual and to satisfy Pakistan, India’s bilateral ties with OIC countries are never affected, barring Malaysia and Turkey which have been vocal in supporting Pakistan.

Former Malaysian PM Mahathir Muhammad had made some egregious remarks against India on J&K. This led to India retaliating by reducing palm oil imports from Malaysia. Mahathir was ousted thereafter and Malaysia has not spoken out again in the same vein. India’s ties with Saudi Arabia and UAE, two leading countries of the OIC have improved under PM Narendra Modi’s leadership, as have ties with Bangladesh and Maldives. Ties with other Islamic countries have not been affected. Most of these countries have skirted the J&K issue.

Pakistan’s frustration on the issue of J&K not getting any traction internationally has been mounting. This led to an attempted alignment with Iran, Malaysia and Turkey, to upstage Saudi Arabia and UAE in the OIC.

The Pakistani FM shot his mouth off by warning that if the OIC did not show enough activism on J&K, Pakistan would be forced to form a separate Islamic platform outside the OIC.

This was a direct challenge to Saudi Arabia and Pakistan paid the price of having its loan recalled and its army chief’s mission to mend ties, resulting in his being roundly snubbed, as he failed to get a meeting with the Crown Prince Muhammad bin Salman.

The OIC resolution will have no effect on India’s ties with Islamic countries.

The establishment of formal ties between Israel, UAE and Bahrain and a recent clandestine visit to Saudi Arabia by Israeli PM Benjamin Netanyahu are indicators of changing geo-political trends in West Asia. The downslide in Pakistan’s ties with UAE is manifested in the latter’s visa ban on Pakistan. Both Saudi Arabia and UAE host millions of Pakistani workers and if the axe were to fall on them, Pakistan will suffer, at a time when its economy is struggling.

For the moment, a beleaguered Pakistan and the government of PM Imran Khan, facing a combined opposition onslaught on the domestic front, will shout from the rooftops that the OIC resolution is a great victory for Pakistan.

For India, it will not cause any strain in her ties with OIC countries which have repeatedly conveyed that bilateral ties are independent of OIC resolutions on J&K.

At best, this so-called ‘victory’ proclaimed by Pakistan will mute domestic opposition but will go down as another Pyrrhic victory, meeting its inevitable end, as the world moves on.