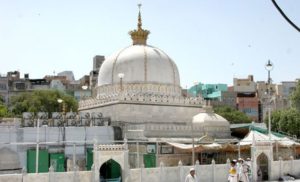 Recently, we celebrated Independence Day with joy and gaiety. August 15 was the day when we Indians began to breathe the air of freedom. This freedom, of course, brought decent life and basic human rights back to us. However, we tend to forget the remarkable contributions of many who built our nation, particularly those who developed a composite Indian culture with their mystically-inclined role. Our mystics had a fairly large share in creating a composite culture of our country.

India has been the land of mystics and Sufi saints. Sufism is anchored in humanism, universal brotherhood, peace and pluralism, compassion, goodwill and tolerance. It’s in perfect harmony with the composite Indian culture. Sufi teachings are based on pluralistic traditions that are in sync with the notion of unity in diversity. Sufi saints preached moderate, progressive, multi-cultural and pluralistic Islamic tradition, which was the sole reason behind its popularity in the land of Vedic culture.

In contemporary India the impact of Sufism can be seen through the prism of arts and culture. The multi-faceted Sufi tra-dition reflects an essentially pluralistic and composite culture that connects people of this country beyond many barriers. The most redeeming features of Sufism’s appeal in India, as anywhere else, are its inherent openness, wide embrace, tolerance and its accommodating nature. No wonder then, a great many Indian Sufis, like Khwaja Gharib Nawaz Moinuddin Chishti of Ajmer, Baba Fariduddin of Pakpattan and Delhi’s Qutbuddin Bakhtiyar Kaki, Hazrat Nizamuddin Aulia and Chiragh Dilli left an everlasting and magnetic impact.

However, one regrets that the true spirit of Sufi culture and tradition in the country is now beginning to wane. It has been reduced to only occasional shrine visits, spiritual consultation or observance of particular routine rituals and festivals. Today’s fakirs and pirs seem to have done away with their effort to keep alive the Sufism-inspired mystical culture of pluralism and moderation. Though they still engage in their occupations in the mazars that outnumber even mosques and madrasas in some areas, they seem to have lost their impact. Now their role is reduced to being peer-o-murshid (spiritual guru) to those who seek consultation in relation to their mundane worldly affairs.

Needless to say, Sufis and all mystically-inclined traditions of India have to reclaim and strengthen the spiritual foundations on which they are based. We should engage in creating a global spiritual fraternity through tawheed (oneness of God), wahdatul wujud (unity of existence), ilmul yaqeen (kno-wledge with firm faith), zikr (incantation), mura-qaba (meditation), observance of taqwa (God-consciousness) and tawba (repentance on sins), ikhlas (sincerity), tawa-kkul (contentment), sidq (truthfulness), amanah (trustworthiness), istiqamah (uprightness) and shukr (thankfulness).

Ghulam Rasool Dehlvi is a classical Islamic scholar, speaker and English-Arabic-Urdu writer and translator. He can be contacted at grdehlavi@gmail.com