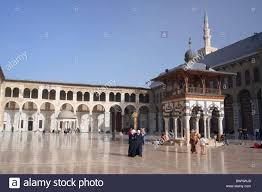 Besides scores of monumental mosques and madrasas like the Jam’e Damishq and madrassa and tomb of Nur al-Din, architectural buildings in Syria abound in the forms of hospitals and medical educational institutions, most notably the Maristan or hospital of Nur al-Din. This hospital also functioned as a medical school and had a magnificent portal, which is a mixture of Roman, Iranian and Mesopotamian styles.

Tombs were in plenty in Damascus. Ibn Jubair (1184) has recorded more than twenty examples of the religious tombs in Syria. Most of them were commemorative structures which had the tombs of the founders attached with them. The interior of the tombs was usually decorated with painted stucco designs. Madrasas which imparted both religious and secular education stood out as the most flourishing Islamic monuments in Syria under the Ayyubid rule. The most notable examples of tombs and mausoleums in Syria are the tomb of Badruddin Hassan and the mausoleum of Sultan Salahuddin Ayyubi in the famous Madrassa Aziziya. Islamic architecture of the Ayyubid era introduced the Ablaq masonry.

Behind the modern town of Al-Ma’ara in Syria, there is a very strange site known as “Dead Cities”. They are age-old abandoned cities and have been left to nature, sheep and local picnickers. In addition to a few monuments in this site, there are buildings forming a whole town including a tavern, Hammam (bath) and a church. The dead cities are many like Jerada, Ruweiha and Al-Bara, but it’s hard to figure out where one starts and ends.

It is, clearly, a substantial proof that the early Muslims took their faith as a source of excellence and creativity in civilisation and other scientific pursuits. For them, Islam was a source of civilisational, scientific and cultural pursuits integrating into the creative architecture, fine arts and crafts with flourishing Islamic values reflected in them. But what the present-day Islamist zealots, particularly Daesh or ISIS, are doing by their cultural destruction in Iraq and Syria is not difficult to see. They have ostensibly waged a war against the deep faith of pious Muslim predecessors, the Salaf-e-Saleh whom they loudly claim to follow.