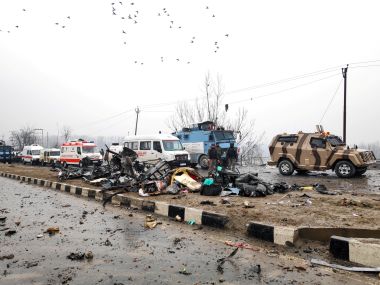 Pyjamas, undershirts, a bedsheet: long lines of laundry veiled the mural, a kind of antidramatic counterpoint to the message. “Delhi, Delhi ya hanood, Jaish-e-Muhammad sauf yauood (to Delhi, O’ Hindus, the army of the Prophet will soon return),” the slogan on the wall read. Inside the Jaish’s headquarters in Bahawalpur, hundreds had gathered to hear about the war to realise that promise. From loudspeakers, words poured out with the intensity of a buzzsaw:

“The blood of martyrs has drenched our lives,
The garden awaiting us is full of light”

“Kashmir is a living proof of god’s law, the eternity of jihad and the religious honour of the Muslim nation,” Jaish chief Masood Azhar’s younger brother Talha Saif told the gathering, assembled to mark the anniversary of the execution of Indian Parliament attacker Afzal Guru on February 9, 2019.

A week later, Adil Ahmed Dar rammed his explosive-laden car into a bus on the highway to Srinagar, killing 40 Central Reserve Police Force personnel, pushing India and Pakistan to the edge of a war.

The men who gathered in Bahawalpur included dozens who hoped to die like him.

Four feet tall, just about; portly; 47 years old when he was shot dead in December 2017, Noor Muhammad Tantray wasn’t the kind of man who looked like he might “strike terror in the people”, as the judge at his trial put it. In 2011, Tantray was sentenced to life imprisonment by a Delhi court. Four years later, he obtained a transfer to Srinagar jail from Delhi’s Tihar, secured parole—and disappeared.

Kashmir’s fidayeen factory now had an engineer. And, Adil Dar was just one of the many who has rolled off the assembly line since then.

Back in 1999, when Masood Azhar called for volunteers for the newly founded Jaish, Tral-born Tantray was running errands for foreign jihadists in the region. Having joined the local Harkat-ul-Mujahideen commander Shah Nawaz Khan when he was just 15, Tantray followed him across the Line of Control into Azhar’s new organisation.

The two men, intelligence officials say, trained at the Jaish’s Rehmania camp, near the Bagram air base in Kabul. Their principal instructor was Ilyas Ghuman, one of the group’s senior-most members.

In the summer of 2001, Khan, using the pseudonym Ghazi Baba, returned to Kashmir. He went on to stage that year’s savage attacks on the Jammu and Kashmir assembly in Srinagar and the Parliament House in New Delhi. Tantray facilitated both the strikes officials say, arranging housing for the fidayeen.

Forty-eight hours before Khan’s death on August 30, 2003, Tantray was arrested bringing in explosives to stage another attack in New Delhi.

In 2001, General Pervez Musharraf began winding down the jihad in Kashmir, believing it posed too high a risk of an all-out India-Pakistan war. He began a secret dialogue with Indian Prime Minister Manmohan Singh, aimed at a peace deal in Kashmir. The deal fell through but in 2011, when Tantray was convicted, the jihad in Kashmir had all but ended.

The dwarf’s army, it seemed, was dead. Security and Indian Army personnel around the blast site in Kashmir’s Pulwama. Reuters

Tantray’s freedom coincided, almost as if by design, with a critical phase in the Jaish’s jihad. From 2014, Pakistan’s military was watching Prime Minister Narendra Modi warn of retaliation if there were cross-border terrorist attacks—and decided to test his word. In 2015, Jaish fidayeen struck in Gurdaspur, following up with attacks on the Pathankot air base and an army brigade’s headquarters in Uri.

Furious, India struck back across the LoC but the story wasn’t quite done. In coming months, Jaish fidayeen units struck at military bases in Nagrota and Sunjwan as well as a CRPF training centre in Lethpora. The message was simple: Pakistan’s intelligence services were willing to ratchet up the game, too.

Ten new Jaish groups, India’s intelligence services believe, trickled across the LoC from 2016 on—many made up of battle-hardened volunteers who fought in Kashmir before 2001.

From his base in Tral, Tantray stitched together the local networks that would allow these groups to operate. He was helped by the presence of a growing cohort of young Islamists, radicalised by the street violence that broke out in 2016, who saw themselves as defending Islam against a predatory, Hindu-nationalist state.

Fardeen Khanday, the 15-year-old cricket-loving schoolboy who staged the December 2017 suicide-attack on the CRPF centre at Lethpora, was among those mentored by Tantray. So was Khanday’s fellow fidayeen, Manzoor Ahmad Baba. Hilal Rather, killed with Pulwama bombing architect Abdul Rasheed on February 18, was yet another.

Last year, 49 Jaish jihadists, 35 of them believed to be Pakistani nationals, were shot dead by the Jammu and Kashmir Police, up from 23 in 2017. The onslaught ensured there were no fidayeen strikes from January 18, 2018 onwards.

Tantray was killed by police on December 26, 2017 but, as events would show, his factory wasn’t yet out of business.

Feeding the fidayeen factory in Kashmir is a much larger army: the infrastructure which organises the hundreds of young south Punjab men who head to the Jaish’s military camps each year. In its magazine, al-Qalam, the Jaish calls on Punjabis to donate their religious tithe for jihadists. It publishes accounts of mosque-level meetings across the region, asking for volunteers for jihad.

Three recruitment programmes, Jaish publications shows, open this month in Bahawalpur alone: from February 16 to March 2, February 22 to March 8, and from February 23 to March 9. The message is the same: the survival of Islam rests on armed jihad.

Nizamuddin Shamzai, the chancellor of Azhar’s alma mater, the sprawling neo-fundamentalist Binori Town seminary in Karachi, nursed this idea for decades. In 1979, his student Irshad Ahmed founded the Harkat-ul-Jihad-ul-Islami to fight in Afghanistan. The organisation split in 1984, with Fazlur Rehman Khalil founding the Harkat-ul-Mujahideen in defiance of Qari Saifullah Akhtar’s leadership.

From 1988, when al-Qaeda first appeared on the battlefield of Khost in Afghanistan, both groups collaborated with Osama bin Laden. Failing to qualify for armed service with the Harkat-ul-Mujahideen because of his weight, Azhar was instead used as a propagandist and fundraiser, even travelling to Africa and Europe.

In 1994, Azhar was sent across the LoC to merge the two Harkat factions, and ended up in prison. The Harkat made repeated attempts to free him, notably by kidnapping Western tourists in Kashmir. He was released in 1999 in return for passengers on board a hijacked Indian Airlines flight.

Nasser al-Bahri, a bodyguard with bin Laden during the late 1990s, has claimed the slain al-Qaeda chief thought up the operation. “Bin Laden wanted Azhar freed and had ordered al-Qaeda to plan the Indian Airlines hijacking with Harkat,” he said in an interview.

Following his release, Azhar set up the Jaish and immediately unleashed fidayeen strikes in both Kashmir and Afghanistan.

Former Pakistan air force officer-turned-jihadist Adnan Rasheed wrote that he had begun his terror career after 9/11, travelling to the “Jaish-e-Muhammad office and then to the Manshera training camp” “I stayed in their camp for 23 days waiting to go along with some other brothers to Afghanistan.”

Later, Rasheed wrote, he participated in a Jaish meeting where volunteers were sought for suicide attacks in Kabul. Fifteen of 200 participants volunteered.

General Musharraf’s anti-jihad turn, though, led to severe pressures on Azhar. In 2003, the ISI forced him to expel several members involved in attacks against Christian and western targets. He broke ranks with Shamzai after bin Laden used an edict from the cleric to justify declaring Musharraf a traitor and apostate.

Azhar was reviled within the jihadist movement for this volte-face but it earned him the ISI’s unreserved support, ensuring the organisation could operate openly despite legal proscription. Following the exposure of the Jaish’s role in the Pathankot strike, then-prime minister Nawaz Sharif wanted action but the army barred his path.

“The national fields can be irrigated only with the blood of the best hearts and minds,” Azhar wrote soon after his release from prison in India. “The road to freedom is paved with human bodies.” The lure of his blood-cult, political scientists say, lies in Punjab’s feudalism. Families with holdings of several thousand acres, with armies of retainers, still control the region’s political life—the country’s Supreme Court deemed land reforms un-Islamic in 1990.

For the rising lower middle-class, and for the poor, Islam is a language of empowerment and protest—a means of pitting god’s promises against the inequities of the real world.

“Having no alternative ideology like Marxism or Liberalism or even language symbols which may challenge the feudal stranglehold,” social scientist Tahir Kamran says, “militancy remains one of the few ways to counter it.”

For many young recruits, jihad offers the illusion of agency and empowerment. “I met some young boys from my village near Bahawalpur who were preparing to go on jihad,” social scientist Ayesha Siddiqa has written. “They smirked politely when I asked them to close their eyes and imagine their future: ‘we can tell you without closing our eyes that we don’t see anything’.”

In November 2017, after his nephew, Talha Rashid, was killed in Kashmir, Azhar wrote, “The martyr’s sins are forgiven when the first drop of his blood falls and he is spared the agony of the grave, the terrors of the day of judgment; he is married to seventy-two virgins; his family granted god’s mercy.”

Like Adil Dar, many are waiting to die for that vain promise.

THE JAISH AND ITS ATTACKS

Jaish-e-Mohammed founder Maulana Masood Azhar was sprung from the Kot Bhalwal jail in Jammu in 1999 and set free in Kandahar, Afghanistan along with two more militants, Ahmed Omar Sayed Sheikh and Mushtaq Ahmed Zargar, all members of Harkat-ul-Mujahideen, in return for the release of Indian Airlines flight IC-814, its passengers and crew, on December 31, 1999. The Kathmandu-New Delhi flight had been hijacked on December 24.

October 2001 JeM carries out bombing near Jammu & Kashmir assembly, in which 38 people and the three attackers were killed