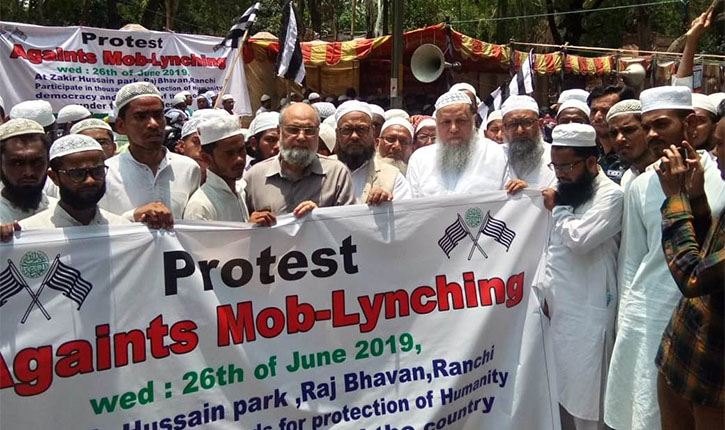 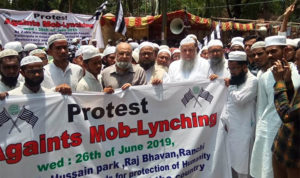 The protesters expressed their anger over the killing and demanded from the state government to take stern punitive action against the guilty persons.

Maulana Mahmood Madani, General Secretary of Jamiat Ulama-i-Hind said here in New Delhi that if state government failed to act in accordance with the guidelines issued by the Apex Court, then Jamiat would launch a country wide protest against mob lynching.

In JUH’s  memorandum it has been demanded that the killers of Tabrez Ansari and culprit police officers shall be brought to book immediately as well adequate financial compensation shall be paid to the next of kins of the deceased and government should give an employment to his wife. It has also been demanded that the state should act in accordance with the guidelines by the Apex Court to pay special financial compensation to the victims of mob lynching and appoint a nodal officer in every district to handle the issue.

Besides that the memorandum demanded that a separate law should be enacted and fast track Court shall be established to handle the mob-lynching cases. All the incidents of mob lynching that have taken place in Jharkhand in the past shall be transferred to the fat track court. The attention of the Jharkhand CM has been specifically drawn by submitting a memorandum to him that the killing of Tabrez Ansari is not an ordinary incident, but a result of a particular mindset that is very much against the civilizational and democratic ethos of the country. Every peace loving citizen of the country feels pained by such gory incidents. The death of Tabrez Ansari in the police custody is also a matter of great concern and seriousness. Such kind of ghastly and barbaric action can never be condoned in democratic and civilized country like India. The state government cannot abdicate its responsibility if such incidents are recurring there. The government of the day is bound by the constitution to protect the life and dignity of its citizens and take firm action against those who indulge in wreckless killing of innocent persons.

Kindly find herewith the attachments of Jamiat Ulama-i- Hind’s press release and publish it and oblige.