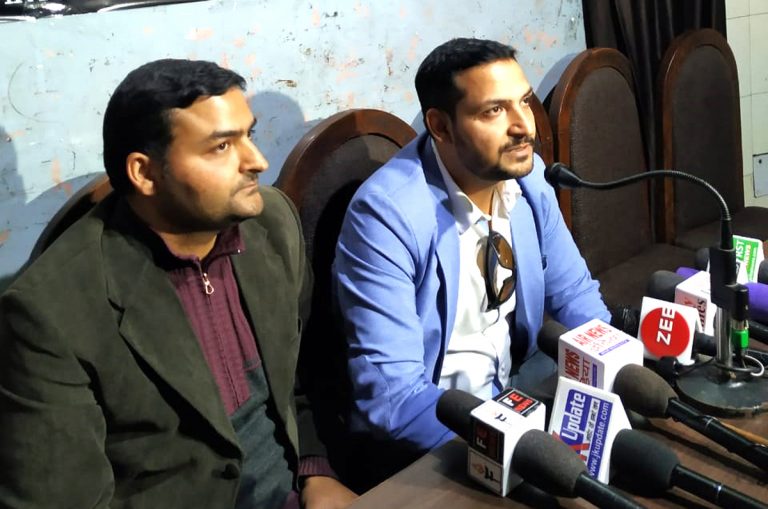 JAMMU, Feb 2: A big announcement was made today by Rakesh Roshan Bhat and Rohit Bhat of Vomedh to put Jammu on world map of international film festivals by organizing an international film festival annually in Jammu.
Talking to the media persons, Rakesh Roshan Bhat, the festival director said there is a need to put Jammu on the world map for its potential with regards to Arts in general and films in particular. “Thus, we are starting an annual international film festival called ‘Jammu Film Festival’ from 2019. It is tentatively scheduled to be held in May this year. The exact dates would be announced soon”, he added.
“The first edition of the festival will be focused on only short films. A nominal fee will be charged for the entries and a competent jury will select the best movies in each category. A special category will be made for promoting local aspiring film makers. Another special category will be focused on encouraging movies highlighting the conflicts impacting the human race. These conflicts could be man to man or man to nature as well. The festival will recognize and award the winning entries. There will be an annual ‘inspiring icon’ award given to a person of J&K origin who has made it big in Bollywood. Rest of the details will be available soon on the website www.jammufilmfestival.com”, he informed.
Many Bollyw-ood personalities including the ones from J&K are likely to attend the festival, he said, adding that the festival will showcase the select entries and will feature lot of workshops on acting and other technical aspects over 2 days.

“Lalit Parimoo, a renowned Bollywood actor and acting Guru will be on the jury panel and also conduct an acting workshop. He is also the core team member of festival”, he added.
Both Rakesh and Rohit are noted theatre personalities and have recently ventured into film making too. Rohit has previously managed production of daily soaps and films and Rakesh is a noted playwright and short film maker.

Roots in Fateh Kadal Entertainment owned by Meenakshi Rakesh Bhat will be the strategic partner for festival.