Home Jammu and Kashmir Jhelum Fables: A workshop in Srinagar familiarises young Kashmiris with the river,... 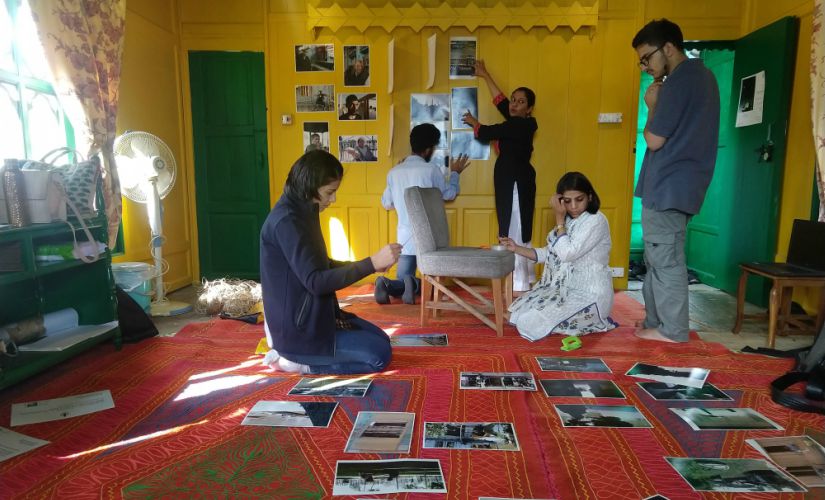 When he was growing up in Srinagar, the bund of the river Jhelum was a favourite haunt for Afaan Zargar. It was where he and his friends would skip classes to spend long hours, but it wasn’t until a creative writing and visual storytelling workshop held in a houseboat on the banks of the river that he began seeing the Jhelum as more than just a spot.

Known as Vitasta and Vyeth, the Jhelum was once the lifeline of the Valley, its arterial road. Away from the hustle and bustle of the city, the river is home to the m​ajestic chinars, houseboats anchored on its bund, and a space to socialise.

Everyday, several thousands pass by the river that snakes through the Valley from its Southern district to the North, but few notice it.

“I saw a very different life here,” says Afaan, who is currently pursuing a degree in engineering outside the state. The workshop opened up Afaan to the “different” lives of those who dwell on the river, and the many facets of these lives. A glimpse from the workshop

The five-day workshop, titled Jhelum Fables, was organised by Roots Learning Group, a Srinagar-based group that intends to establish an “empowering space” for students to learn and grow, run by Mahi Burza who has earlier worked as a teacher in Srinagar, and mentored by Rajasthan-based journalist Tabeenah Qureshi, who is also a recipient of a national award in photography conferred by the Information and Broadcasting Ministry.

Conducting Jhelum Fables in the setting of a houseboat was a vacation well spent. “It was the best vacation I have had in the last ten years,” Tabeenah said. At the end of the workshop, the participants produced a visual story and a write-up about the river Jhelum. “The final outcome from every participant is an ode to the Jhelum. The spirit of the river and its relationship with its thousands of dwellers was the focus of their works.” The workshop is conducted on a houseboat

“All through its flow, one finds a number of structures, wooden and concrete, spread through its length. Living with its current, resisting its flow, and connecting the city, it has cradled time and beyond,” wrote 16-year-old Qazi Hammad. Like Afaan, Qazi also had never “thought much about the Jhelum”, but in the last five days, he said, he saw a life that was different from those who live on the lands. “What I once thought about this river has changed,” he said, “I now appreciate what people here do and how life revolves around the river.”

One of the first observations made by Qazi was the interaction of the river’s dwellers, who live on houseboats anchored to the banks, with the birds in the river’s surroundings. “We have a culture of feeding birds, but unlike at home, where we scatter rice for birds in our lawns, here they do it on their rooftops,” he noted. Afaan, too, noticed how the river dwellers use their roofs. “When we take out chairs, we put them in the lawn, but here they put them on their roofs. They have limited space and make the most of it,” he says. For other residents of Srinagar, the bund is merely land they stroll upon, while for river dwellers it is a place of unity, and a playground for their children; the participants soon learnt about this aspect. “Life thrives near water bodies,” Qazi wrote in another essay as part of the workshop’s final output, “On green houseboats. Shades of blue and grey peck on the white rice spread by humans. The Jhelum continues to nurture life.”

The workshop’s aim, Mahi said, was to focus on aspects of life that run alongside the conflict that has plagued the Valley, but also to draw out more women.

However, there were few who signed up. Many participants left midway but the organisers found solace in 19-year-old Iqra Yusuf, who surprisingly is hydrophobic.

Iqra is based in New Delhi and has in the past visited home during vacations. The thought of a workshop in a houseboat and getting to know her roots prompted her to try to overcome her fears. “I feel connected with my home now,” she says, adding that walks around the river gave her an intimate perspective to the city she never knew. “I have even overcome my fears to the point where I now feel like going on a shikararide.” A wazwan meal for a wedding is being prepared on the bund. Photograph by Iqra Yusuf

Even though more women did not participate, Mahi isn’t disappointed. “It’s a journey guided by the Jhelum,” she said, adding that the space would be utilised for creating a platform for debates and discussions. “There are several such organisations working on the cultural front. It’s a silent cultural revolution.”

Her spirits were reflected in the work of 20-year-old Adam Ahmad, pursuing a degree in information technology, who also made the river and its birds the focus of his output in a poem titled ‘The Winged Companions of Jhelum‘.

“Soaring high beyond the pedestal of dawn/ Salty, earthen and black, these birds of promise/ Painting Jhelum with their reflections/ Its water caressing their beaks/ Its people catering to their bellies,” he writes. “This ancient witness/ A patient origin of life/ Its banks tranquil/ Its water roaring/ And perched over the roofs of houseboats/ Are these winged companions of Jhelum/ Who merrily fly above/ But with Jhelum they flow.”