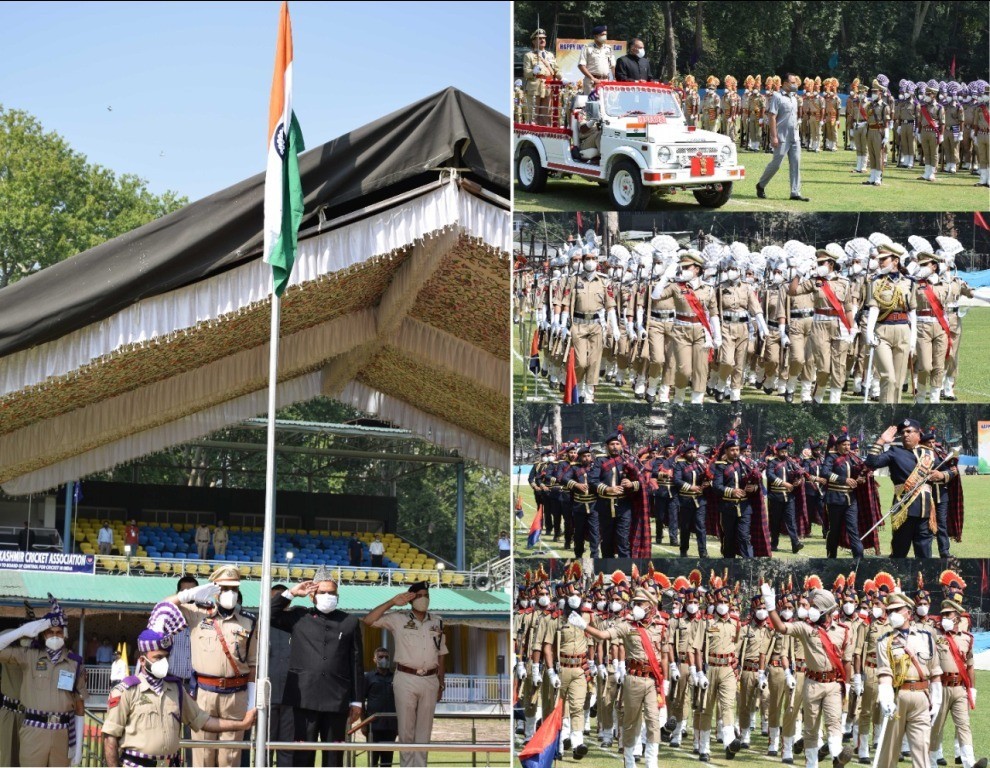 SRINAGAR: The full dress rehearsal for the 75th Independence Day parade, on Friday, concluded successfully across all the districts of Kashmir, giving a glimpse of the grand spectacle to unfold on Sunday.

The rehearsal is a precursor to the actual Independence Day parade scheduled to be held on 15th of August.
In Srinagar, the full dress rehearsal was held at S.K Stadium where Divisional Commissioner Kashmir, Pandurang K Pole hoisted the National flag and took salute at the March–past. In an open jeep, the Div Com also inspected the parade on the occasion.
The contingents that participated in the March past parade included Police, CRPF, SSB, JKAP, BSF, IRP, lady contingent, SDRF, F&ES and FPF.

On the occasion, a variety of cultural programmes were presented by both male and female artists, enthralling guests and audience with their colourful performances in different languages.
A group of students who have won the National Anthem singing competition at district level also performed and sang the national anthem on the occasion, before a band performance.

Among others, DC Srinagar and various senior civil administration and police officers were present on the occasion.
At Budgam: The Additional District Development Commissioner (ADDC) Budgam, Akramullah Tak today unfurled the tricolor, took salute at the March past, inspected the parade presented by contingents of JKP, JKIP, CRPF, Home Guard NCC and school students at Sports Stadium here.

In his address, the ADDC threw light on the history about the circumstances and sustained struggle that helped achieve independence. He saluted the hero’s who with their relentless commitment and goal in their mind put everything into the struggle and were successful in giving us an independent nation.
The function was also attended by SSP, Additional Deputy Commissioner, ASP, all concerned DySP, many District/Sectoral Officers and other concerned.

Similar, rehearsal functions were also held at all Tehsil Headquarters.
At Ganderbal: The Additional District Development Commissioner (ADDC), Ganderbal Pir Muzaffar Ahmad today unfurled the tricolor, took the salute at the march-past, and inspected the parade at Qamariya Ground here today.
The ADDC expressed satisfaction over the arrangements made by various departments for the hassle free celebration of the national event at the venue.
The march-past was presented by the contingents of JKP, JKAP, CRPF, SSB, Home Guard and students of various schools. Besides, colorful cultural items and theme based skits as a part of the full-dress rehearsal were presented by students and well-known local artists.

Meanwhile various colorful cultural programmes were presented at the event which evoked quite applause from the audience.
It is worth mentioning here that during the function, all COVID-19 related SOPs and guidelines especially using face masks and maintaining social distancing were taken into consideration for mitigating exigencies.
The full dress rehearsal was also held at police lines Khushal Stadium Sopore.

Addressing the gathering, the DC said that the nation is paying rich tributes to the leaders, freedom fighters and martyrs who made countless sacrifices for the freedom of the country. Glorifying their contributions, he said that it is the result of their supreme efforts that we are living in a free country.

The DC highlighted the covid mitigation efforts besides achievements made by the district under various priority areas including education, healthcare, languishing, back to village, district capex, agriculture and allied sectors, women and youth empowerment, MGNREGA, JJM, water and electricity supply to Anganwadi Centres and schools, rural development, macadamisation and road connectivity, social welfare, Nasha Mukt Bharat, industries, self employment and creation of durable and sustainable assets.
On the occasion, colorful cultural programmes on patriotic themes were presented by students and artists of the district.
Among others, SSP, ADCs, CEO, ACP, ACR, DEPO, Ex. Engineer PHE, Tehsildar Anantnag, officers from civil and police administration and general public were present during the full dress rehearsal
At Shopian: The Additional Deputy Commissioner, Shopian, Mushtaq Ahmed Simnani today unfurled the National Flag, inspected the parade and took salute at the March Past presented by the contingents of CRPF, JKP, IRP, and Home Guard at District Police Lines (DPL) Shopian..

On the occasion, Artists enthralled guests and audience with the colourful performance.
Various senior civil administration and police officers were present on the occasion.
Similar Rehearsal functions were also held at Sub-Divisional Level, Blocks and in Schools.
Underlining the need of maintaining peace and communal harmony for development, ADC said that Shopian district is a glaring and shining example of brotherhood where people of different faiths and communities co-exist peacefully.
At Kulgam: The full dress rehearsal was held at District Police Lines Kulgam today during which Additional District Development Commissioner (ADDC) Kulgam, Riyaz Ahmad Sofi unfurled the national flag, inspected the parade and took salute at the march past.

The march past was presented by contingents of J&K Police, CRPF, Women Police, Home Guard, Police band, new police recruits, NCC cadets and other contingents.
Cultural programmes were also presented on the occasion by the college Students, CRPF and Local artists.
Speaking on the occasion ADDC congratulated the people and highlighted the measures of administration which were taken to deal and combat Coronavirus pandemic.
He also highlighted the developmental scenario of the district and achievements booked under various schemes and sectors in the district.

ADC, Showkat Ahmad Rather, A-SP, Zulfkar Ahmad, ACR, ACD, ACP,CEO, DYSSO, DSP-DAR, DSP-HQ and other officers from civil and police administration attended the programme.
At Kupwara: The Additional Deputy Commissioner (ADC), Handwara, Nazir Ahmad Mir today unfurled the National Flag and took salute at the March-past comprising contingents of JKP, IRP, CRPF, FPP, JK Home Guards, COVID Awareness Contingent of JKP and Police Commandos at District Police Lines Kupwara.
Addressing the function, the ADC said that today is the era of development and peace. He said that the administration is committed to develop the socio-economic condition of the district and gave an example of the recent visit of LG to the Bangus Valley for boosting the tourism potential in the district.
Later, various cultural programmes were also presented on the occasion.
Full dress rehearsal functions were also held at Handwara, Karnah and Sogam sub divisions.
At Karnah, SDM, Dr. Gulzar Ahmad unfurled the tricolour and took salute at the March past.
The Tehsildar Handwara presided over the Rehearsal function at DPL Handwara, unfurled the tricolour and took salute at the March past.

Meanwhile, Deputy Commissioner Kupwara has directed all officers and officials to ensure their presence in the Independence Day function on August 15.
At Bandipora: The Deputy Commissioner (DC) Bandipora, Dr Owais Ahmad today hoisted the National Flag and took salute at the March past comprising the contingents of JKP, CRPF, IRP, JK Home Guard, SPOs and NCC Cadets.
The DC in his address congratulated the people on the eve of Independence Day and said that district administration Bandipora is working on a multi dimensional strategy for overall development of the district.
SSP Bandipora Mohmad Zahid, Senior officers of police, Army, CRPF and civil administration were present during the full dress rehearsal.
Similar programmes were held at Block and Sub Divisional level