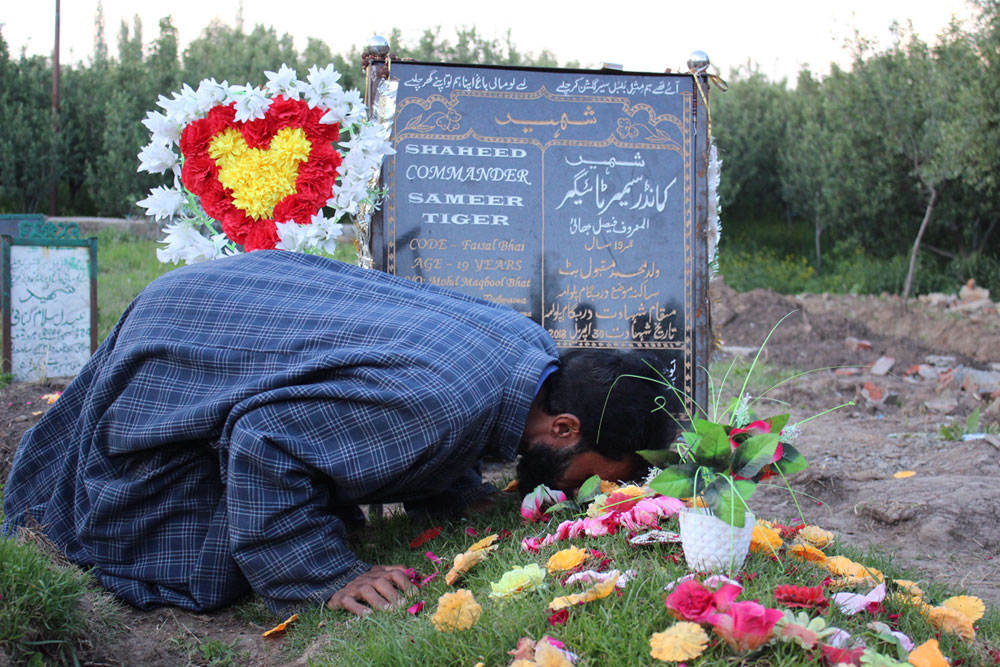 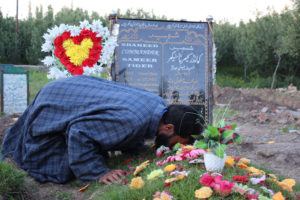 The woman in the video turns towards a man on her right, reaches up to his forehead and kisses him. She then pulls the trigger of the Kalashnikov rifle the man is holding and fires it in the air. There is cheering by the group of men surrounding her. It is believed that the woman was none other than the militant Saddam Padder’s mother. The person she kissed was Syed Naveed Mushtaq, a police deserter turned militant who had decamped with the service rifles of four guards posted at Food Corporation of India at Badgam, a central district in Kashmir Valley.

A new era of cult martyrdom

At the age of 25, Saddam Padder was a master recruiter of young boys into militant groups. An active militant in Shopian, he was formerly associated with Lashkar–e Toiba, a Pakistan based terrorist organisation, and had joined Hizbul Mujahidin in 2015. He was one of eleven people in said group, led by Burhan Wani, whose picture posing in the orchards of Kashmir had gone viral in 2016. Saddam Padder was the last of the ‘new age eleven militants’ killed on May 6th.

With them had emerged a locally brewed militancy bolstered by mass local support. “People perceive them as ‘local robin hoods fighting zulm (oppression)”, says a local journalist. Saddam had recruited almost 30 young boys from his area.  While Burhan was killed in an encounter 2016, Saddam was killed with five others in an attack on May 6th 2018. 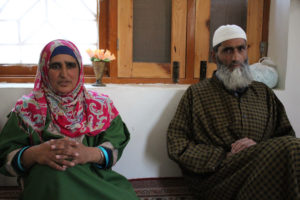 With the deaths of these poster boys in militant groups, a new era of cult martyrdom seems to have been born in Kashmir. “Their graves are the new shrines in Kashmir”, says the local journalist.

However, what is more disturbing is the support of local mothers in carrying guns, extolling, supporting and encouraging the culture of martyrdom that is beginning to form the new driving narrative for (freedom) jihad and militancy in Jammu and Kashmir.

With the deaths of these poster boys in militant groups, a new era of cult martyrdom seems to have been born in Kashmir. “Their graves are the new shrines in Kashmir”, says the local journalist.

I drove to Heff, about 55 km from Srinagar, to meet Feroza, Saddam’s mother.

I am accompanied by a photojournalist who now and then breaks the monotonous silence to tell me local stories of the villages we pass through. He advises me not to take pictures as people might construe it differently. Just before nearing Saddam’s house in Heff, we pass through a graveyard. There are around 14 graves marked with different years and terrorist group affiliations, starting from 1996.

My guide informed me that there has been a steady contribution of young boys to jihad from this village.

A local villager joins us and starts praising Saddam. “He was the greatest of all. We won’t find another one like him. He will be missed by all of us,” he said. As we enter Saddam’s house, there is a crowd of relatives and local villagers who have come to offer their greetings to the family, especially to. “I used to cry my heart out when I went to the funerals of other mujahids(warriors) but when my own son was martyred, there was deep calm within me for I knew he was committed; a true believer who has given his life to the path of Allah,” said Feroza with pride. She adds that if she had two more sons, she would have offered one more for Jihad.

The motivation she says comes from deep faith and a die-hard commitment to Allah as well as from the will to fight zulm (injustice). Feroza admonishes that “the height of zulm will force even us (mothers) to pick up guns now.” However, the driving force is the reward and promise of a place in heaven that propels ‘justified action’. Clearly there is a religious sanction for fighting zulm and martyrdom. “A mother is ensured of darja (position) in heaven when her son is martyred on the holy path,” = Feroza declared with confidence. Mubeena, mother of  another 16-year-old militant killed in April 2018, had walked to congratulate Feroza for Saddam’s martyrdom. Posing defiantly for a picture with Feroza she says, “I feel elated for now we have received the darja, a special status.”

“A mother is ensured of darja (position) in heaven when her son is martyred on the holy path,” Feroza declared with confidence.

In a nearby district, the mother of Sameer Tiger, is equally proud of her son and hails him as ‘Allah’s son’. “He was never mine. He belonged to Allah and went on the path as prescribed for him.” “Sameer was Allah’s amanat (precious possession). He was obsessed with shahadat (sacrifice). It is a matter of pride and happiness for us that he achieved his dream. This is raja(God’s will) and akhriyat (the end time) is the only reality,” said Sameer’s mother.

His 13-year-old sister Shaista and grandmother sitting next to her approve. In another locality in Srinagar, Hajira Bano also justifies her son Mugeez Ahmed Mir’s choices. Mugeez was a militant. Hajira says zulm in Kashmir has reached new heights.  According to police sources there are reports that Hajira could be recruiting new boys into Jihad.

Hajira says zulm in Kashmir has reached new heights. According to police sources there are reports that Hajira could be recruiting new boys into Jihad. 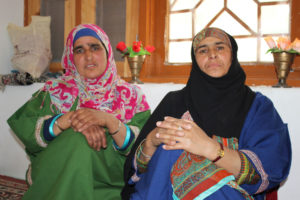 The role of mothers in giving up their sons for the cause is a new phenomenon gaining public recognition and sanction. A pertinent feature to be noted is the way in which this naturally formed bond and solidarity forum of slain militant’s mothers finds their agency through their son’s martyrdom.

“The entire world now knows me! Would they have if my son had not given special shahadat (sacrifice)? Would you have come to speak to me? We are very lucky to be mothers of those who sacrificed their lives for liberation,” acclaims Feroza. Mubeena nods her head in endorsement and says, “It is difficult to forebear, but I am not disheartened as now I have been elevated and ensured of jannat (heaven). Therefore, we as mothers find strength and do not mourn!”

MantashaBinti Rashid, a women’s rights advocate gender expert and founder of Kashmir Women’s Collective explores ideas such as the normalisation and the mainstreaming of concepts like shahadat and religion’s deep-rooted role in political activism as well as how the narrative of ‘right to dignity’ or ‘sense of humiliation’ form the core identity marker of Kashmiri populace. “It occupies our mental space and has become the driving force that justifies avenging acts”, she adds.

It is important to bear in mind that depending on how scriptures are interpreted, these experiences, constructed or otherwise find an expression through the concept of Jihad and are being attributed to one’s faith. Extreme right and violent movements benefit from patriarchal structures as they are able to easily manipulate, coerce and co-opt women for the ‘moral influence’ that women can lend in spreading their bigotry. This was pointed out by SanamNaraghiAnderlini, the co-founder of the International Civil Society Action Network recently, while addressing the UN 6th Review of the UN Counter Terrorism Strategy. She explained that extremist groups like Boko Haram, Daesh and white supremacists understand the power and influence of women, so they seek to control, coerce, subjugate them, and silence them in the public arena. This means they must also fear women.

This is true for any other extremist groups operating to establish their rule or gain political power and control. In Kashmir, it is essentially the meta-narrative of ‘state oppression’, liberation for the caliphate and separation from ‘Hindu India’ that forms the basis for mobilising people using religion to cement them against a common cause.

Stories and narratives are being created and passed on as authentic gospel truth, jihadliterature is readily available and institutional indoctrination is permeating social values that glorify martyrdom and the concept of paradise. Feroza shared a story told by a local maulvi (teacher); according to the scriptures a mother becomes a recipient of the highest place in paradise on account of her son’s martyrdom –  mothers seek refuge in the narrative of martyrdom since that provides them with the status which otherwise is denied to them in their gendered roles.

Women’s rights advocate Rashid posits that since a woman is not seen as an independent voice, she claims, agency through relationships.

Women have been supporters, carriers, messengers of the movement singing for the ‘brave mujahids’ during the initial stages out of the conflict. They were then described  as bridegrooms wedded to the idea of azadi. When they suffered due to the conflict they sought agency through organisations like the Association of Parents of Disappeared Persons, and widows and  mothers became the face of the conflict.

Mothers seek refuge in the narrative of martyrdom since that provides them with the status which otherwise is denied to them in their gendered roles.

“It’s the same phenomenon in a different form wherein women as mothers are claiming agency for their own social elevation and empowerment. Sadly, this is not real or true empowerment” quips Rashid. The glorification of martyrdom as seen in Kashmir has roots in pre-existing patriarchal structures, militarisation and growing violent extremism that only oppresses women more.