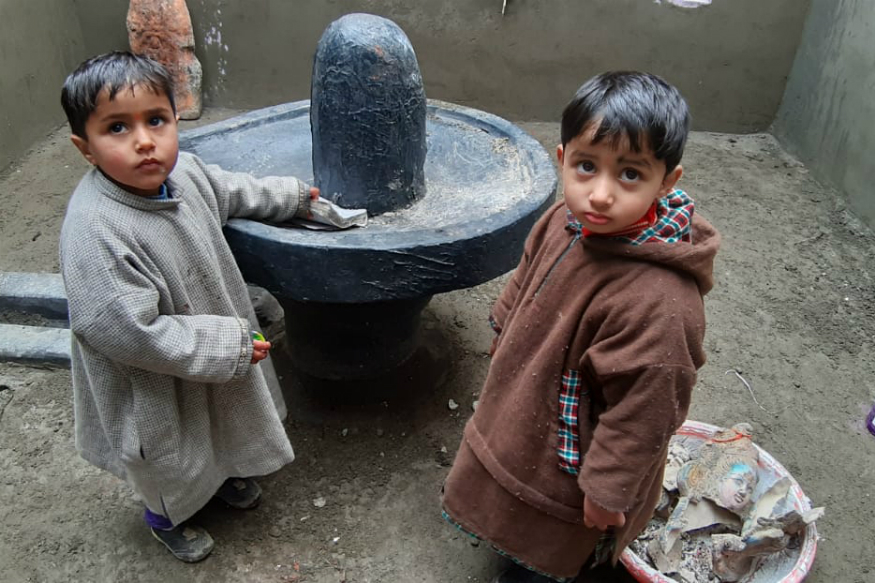 In a strong rebuff to hate mongers, the Muslim community and a sole Kashmiri Pandit family have got together to restore temple, which has not been used ever since the Hindus migrated from there due to militancy.

Acchan, Pulwama: After more than three decades of silence, muzzein’s call from a mosque and chiming temple bells will again reverberate in a village in Pulwama. The temple and the mosque at Acchan — a village on Pulwama fringe — lie side by side but while the mosque remained busy with worshippers, the temple stood in desolation. But this is now set to change.

In a strong rebuff to hate mongers, the Muslim community and a sole Kashmiri Pandit family have got together to restore the 80-year-old temple, which has not been used ever since the Hindus migrated from there due to militancy in 1990.

Barely 12 kilometres from the blast site where 40 CRPF men were killed on February 14, the village is brimming with a fresh spirit to restart the temple that brings lot of memories to the elders.

The temple in a six kanal compound is being refurbished and soon an idol would be placed at the sanctum sanctorum for worship and hymns would be chanted aloud.

“We want to revive it to its previous glory when hundreds would pour into the village to listen to chanting of hymns,” said Bhushan Lal, who is supervising the works with local Muslim Auqaf Trust.

Lal told News18 once the restoration work is complete, they would invite the local Hindus from neighbouring villages and hold special prayers. ”It will be after many, many years that the village would come alive with prayers,” he said with a smile.

Acchan, he added, had 40 families of Kashmiri Pandits living amid almost double the number of the Muslims in 1990. “But they all left in fear. We want to get them back,” he said.

Over the past two weeks, barring a few days when they had to be stopped due to Indo-Pak tension on border, the villagers have given a facelift to the main temple building and restored a spring and drainage.

”We have our task cut out. We need to level the ground, paint the main gate and install the deity. The dome of the temple would also be redone. It will be done within weeks,” said Sanjay Kumar, Lal’s younger brother. Kumar works in a local ATM booth.

The Muslims wanted the family to worship at the temple on Monday – to celebrate the most popular festival of Maha Shivratri – but had to delay the function because the repairs were getting delayed due to bad weather.

Mohammad Yunus, a villager, said they want the temple to get ready at the earliest so that the Hindu families can pray like Muslims do in a nearby mosque. He is hopeful that his migrant Hindu neighbours would return to their roots. “I wish we could relive the old days. I appeal to our Pandit brothers and sisters to come back to the village,” Yunus said.

He recalled that as young children they used to go to the temple once a week. “’An old pujari at the temple would give us sweets, dry fruits and jaggery. We would run to him after playing games,” he said.

The local Auqaf had earlier written to the administration for the overall development of the village. ”Some four lakh rupees were set aside for the temple repairs,” said Nazir Mir, chairman of the Auqaf.

With temple repairs likely to get over soon, the village hopes to revive the centuries-old bond between the two communities. “We hope the village becomes an example for others to follow suit. Kashmiryat will triumph eventually, despite the vagaries of the time,” said Mir.