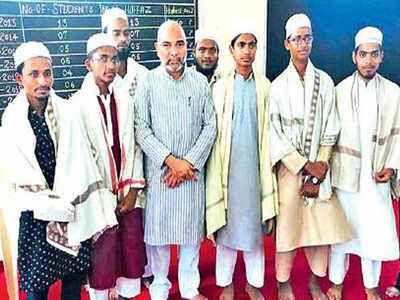 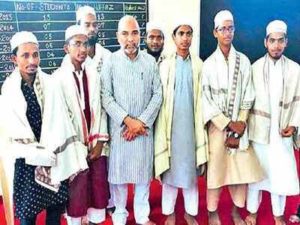 MUMBAI: Mohammed Maaz, 15, would have been assisting his father at a tailoring shop in Bhiwandi but for his stint at Madrassa Jamia Tajwidul Quran in the Malwani slum in Malad. The madrassa made him a hafiz, one who has memorised the whole Quran. The tailor’s son now aspires to crack the UPSC exams and become an IAS officer one day. Maaz’s confidence to take such a leap of faith — from the life of a modest hafiz to a career in the elite civil services — comes because he has recently cleared the SSC or Class 10 state board exams. He is among 13 hafizs educated parallelly at the madrassa and a school, both run by Noor Meher Charitable Trust under one roof.

As the Modi government prepares to modernise and mainstream madrassa education by training its teachers in subjects such as English, science, maths and computers, this Malad madrassa, with a few other Islamic seminaries in the city, represent models that show secular education can go hand-in-hand with the sacred.

Such experiments in running parallel courses — described by the ulema or religious scholars as ‘taleem’ (education) for deen (religion) and duniya (world) — do not meddle with the traditional curriculum but help students get into colleges, gain employment and a set of skills and assist the government in ensuring greater integration. These Islamic schools impart education for ‘deen’ and ‘duniya’Once a part of the frontline education system, the madrassa students can aspire to become professionals and earn handsome salaries instead of simply living – as most madrassa products have done – the life of maulvis at moribund madrassas or as poorly-paid imams and preachers at mosques.

Union minister for minority affairs Mukhtar Abbas Naqvi said in the week just ended that the government’s madrassa programme would be launched in July.

“When we began enabling hafizs to sit for the SSC exams in 2013, we were clear that these hafizs would not have to depend on the community’s charity permanently. I am glad some of our students are now studying engineering and business management,” said Syed Ali, founder of the Malad-based madrassa.

Other madrassas too are charting a new path. Madrassa Darul Uloom Faizane Raza of Goregaon trains the maulvis in trades such as those of an electrician or mobile repairer and even coaches them in English so that they don’t remain jobless once they leave the madrassas. “These madrassa products have ilm (education), but I am giving them hunar (skills). With ilm and hunar, these clerics can find jobs in the open market. Equipped with skills, their employability will be substantially enhanced,” said Mufi Manzoor Ziyaee, the Goregaon madrassa’s founder who is introducing job-oriented courses at his madrassa.

The Safa High School and Junior College near JJ Junction in South Mumbai blends school and madrassa education seamlessly. The school’s trustee, Ishrat Shahabuddin, sister of SP MLA and state president Abu Asim Azmi, explained that some of the students who are admitted in Class 4 are selected for both modern education and the hafiz’s course. “By the time these students reach Class 7, they are already hafizs and subsequently they are taught modern subjects till they clear their SSC exams,” said Ishrat. She adds that so far, her school has produced 57 hafizs who are now either in the mainstream education system or settled as professionals.

Bathing in the glory of young hafizs who are about to join colleges for higher education are some Muslim politicians. “These hafizs have set an example that there is no clash between religious and secular education. We will always encourage more such madrassas,” said BJP Mumbai vice-president Hyder Azam, who felicitated the 13 hafizs at the Malad madrassa on clearing their SSC exams recently.