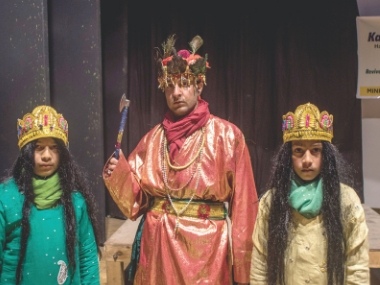 The great Dard prince was drunk, the story goes, his belly heavy with the chicken extracted from his reluctant serfs, when his two lovers were seduced by a cunning village boy. In search of the runaway women, the prince asked the villagers for help — but the fact that he could speak only courtly Persian, not Kashmiri, could not be remedied even with the most energetic whipping. Princes, policemen, politicians: all are parodied as the tale winds its course.

From the 8th century CE on, the Darz Paather — one of a great canon of Kashmiri folk plays, or Paather, which, blending Sufi and Shaivite tradition and layered with dark humour, represents the suffering of the peasants and the eventual triumph of the oppressed — drew audiences across the region.

This month, when the internationally-celebrated Karam Buland Folk Theatre performed at Srinagar’s Tagore Hall, three dozen people, including invited guests and the organisers, were present.
In a war-torn state, an art may soon number among the dead. “This is a business of happiness,” says sixth-generation performer Manzoor-ul-Haq, “but the situation in Kashmir is not conducive for that. We don’t perform in a village when there has been a death.” Bhaands were intellectuals
Based in the village of Wathora, in central Kashmir’s Budgam district, the Karam Buland Folk Theatre is among the few bhaands — or performers — struggling to keep the Paathers alive, passing along its secrets from father to son. In the smoke-filled dressing room at the Tagore Hall, its members made no secret of their concern. “God had once given people time and patience,” says Haq. “Today, god has put a phone in every pocket and television in every home, but taken away the patience. Everywhere else, culture is respected, but here, in Kashmir, we have abandoned our own culture, and our youth prefer guitars over rababs and santoors.”

Like most theatre artists, Haq began his career as a child artist, more than two decades ago, and went on to learn Sufiyana musical instruments from famed maestros of the Valley. Haq’s first onstage performance was in 1996. “But today, I think I could have done better in life had I learnt another trade as well,” he said. “The earnings are good enough to survive, but not much more.”
In popular imagination, Bhaand Paather is associated with light-hearted, sometimes ribald, humour with little social or political significance. The Chakdar Paather, which emerged during Dogra rule, challenged its tyrannical extractions from the peasantry. In contemporary iterations of the form, politics played a key role. Performances of the Haanz Paather, for example, came to include references to politicians who built roads leading only to each other’s homes.

“Bhaands were the intellectuals of that time,” says Haq. “It was said that one bhaand had the qualities of a 100 ordinary people because they could match all of them with their words alone.” Kashmiri theatre directors argue that while the Brazilian theorist and director Augusto Boal popularised the ‘Theatre of the Oppressed’ in the 1970s, Kashmir had already had a centuries-long tradition of doing exactly that.

Nisar Naseem, a prominent playwright and theatre director based in Kashmir, notes that Bhaand Paather stands in stark contrast from high art. “We see that the Sanskrit and Greek theatres depicted gods and goddesses, but this spoke of the common person,” says Naseem. “It spoke about issues which otherwise did not reach the rulers. The bhaands took the messages to the king’s ears.”

The Bhaand Paather, Naseem notes, required no stage, just open space. “They perform surrounded by a crowd, constantly moving around so the entire crowd could see and hear the play.”
In villages subjected to the power of tyrannical monarchs, the battered audiences would find catharsis in its dark humour. “The Paathers are representative of each community and era, but also mock them,” he notes.

Non-idealised version of Kashmiriyat
Folk theatre’s deep roots in Kashmir are found in the Nilamata Purama, the 6th century chronicle of Kashmir’s culture and politics. In this text, Vaisampayana explains why Kashmir did not participate in the Mababharata, saying King Gonanda had at that time been invited by his relative Jarasandha to help him in the war against the Yadavas. Gonanda was slain on the battlefield by Krishna’s brother Balarama. Gonanda’s son Damodara went to Gandhara seeking vengeance. Krishna killed Damodara, but, cognisant of Kashmir’s status, crowned his adversary’s pregnant widow Yasovati.

From this time to the 15th century CE, Kashmir saw a dramatic development of its performing arts traditions. “Each village”, Kalhana noted in his classic 12th century historical account Rajatarangini, “had a stage of its own where dramatic performances were held.

These traditions were consolidated and expanded with the coming of Muslim rule in 1339. It was during the reign of Ghiyas-ud-Din Zain-ul-Abidin, between 1420 and 1472, considered the most benevolent king to have ruled the Valley, that the Bhaand Paather reached its zenith with state patronage. Zain-ul-Abidin’s 15th century court attracted musicians and dancers from as far afield as Kabul, Lahore, Delhi, Samarkand, Tashkent and Persia.

In ‘Loss of a Syncretic Theatrical Form’, scholar Javaid Iqbal Bhat notes that an “important linguistic component of some of the plays is the Phir Kath”, or linguistic play, which hides meaning in apparently-innocuous sentences. “The Phir Kath makes them coded narratives in which meanings and messages are constituted in a manner so as to make only the local people able to understand them. This was done to avoid the trouble from the officers of the different ruling regimes. Over a period of time, Phir Kath became an inalienable part of the popular experience,” Bhat writes. “The fact, however, remains that Phir Kath is/was a symptom of slavery. The necessity of this mode was felt under the consciousness of colonial subjugation.”

The most significant feature of Bhaand Paather, though, as Bhat notes, is “the way it presents us a non-idealised version of Kashmiriyat”. “The accounts relating to the latter basically fall into two categories: either they rubbish it as being fallacious or they glorify it in heavenly terms. Bhaand Paather underlines not merely the shared cultural space and the interweaving of everyday Hinduism and Islam, but demonstrates practically the sharp differences as well. And yet it illustrates, how, despite such differences, it is not impossible to live together.”

Clampdown by insurgents
Tradition holds that every bhaand family was allocated a different area and shrine to perform at. The bhaands were dependent on the alms offered by the people such as rice and vegetables. “Everyone used to please the bhaands,” Haq says, “because they were considered ‘khuda dost’, close to God. People had a spiritual faith with the Bhaand Paather”. Plays traditionally ended with a dua-e-khair, a prayer for well-being; the bhaand was thus not just a comic performer, but a dervish who acted as a spiritual interlocutor between the world of man and god.

It is said that when the Valley was struck with drought during the 1950s, a prominent bhaand of Wathora, Ghulam Rasool Mangun, was sought out and pleaded to hold special prayers for rains. “An hour after that, rains began and the entire Valley was flooded,” Naseem records the fable as holding. But a decade earlier, decline had already begun for the bhaands—a consequence, Haq argues, of the extensive land reforms led by Sheikh Mohammad Abdullah of the National Conference after the Independence. “Earlier, the people were simply labourers in the fields and would give away rice thinking it wasn’t theirs anyway,” he says. “But when they got possession, they stopped.”

Increasingly, bhaands were kept busy with producing plays for promotions of state schemes or on Independence and Republic Days. The emergence of nationalist thinking post-Partition, according to Bhat, led to an “appropriationist hunger” that in turn “disrupted such local cohesive forms as the Bhaand Paather”. Plays broadcast over state-owned broadcasting networks, Bhat writes, were “reproduced with significant editing and sanitisation of the original”.

Even then, however, performances were still held at shrines and marriages through the countryside until the insurgency erupted in the Valley in 1989, soon taking on Islamist overtones. Fear of the Islamists, who sought a clampdown on Bhaand Paather due to its syncretic traditions as well as run-ins with security forces after dusk meant performances were toned down and shortened.
In this period, Bhaand Paather lost its satirical core with performances simply replaying ages-old iterations without political elements. According to an award-winning theatre artist, the reason for this was simple: “Who wold want to risk either side’s ire?” “That there is widespread oppression is known,” he says, “but we cannot directly show what the insurgents or the Army do in Kashmir.”

The pressures were, in, at least, some cases unsubtle. Shameema Parveen, among Kashmir’s pioneering women in theatre, and the first to perform in Bhaand Paather, was killed by jihadists. Noted performer Mohammad Subhan Bhagat gave up as a result of the pressure. “The militants didn’t want Subhan to perform Bhaand Paather; they considered it unIslamic,” theatre artist MK Raina said in an interview published in 2008.

Naseem has tried to keep alive political theatre: one of his plays addresses how politicians, both pro-India and secessionist, manipulate the people; another depicts the forced migration of Kashmir’s Pandit community.

For the bhaands, though, there seems no way of escaping the pressures of a world that has changed beyond recognition—and is inhospitable, as never before, to the idea of laughing at itself.