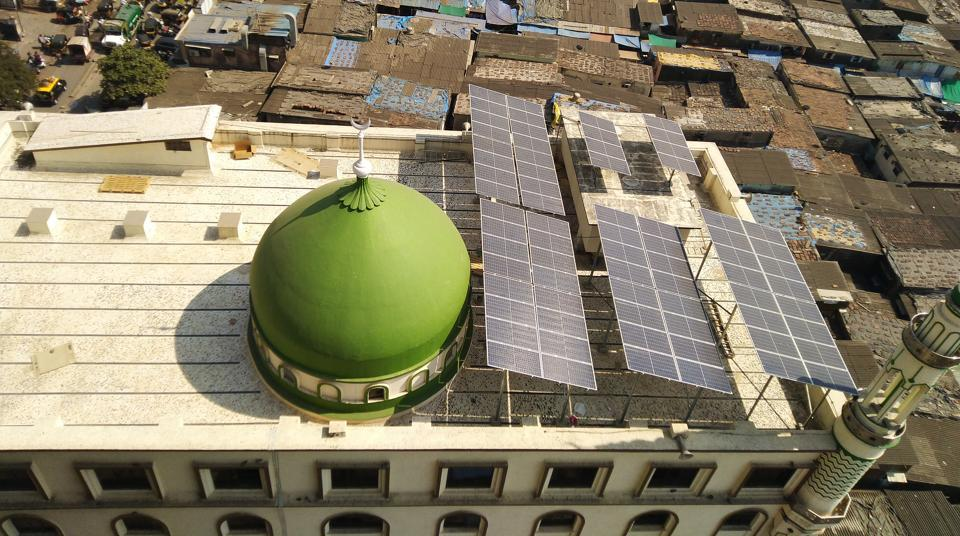 The Noorani Masjid at Malad’s Pathanwadi is the eighth mosque in Mumbai to opt for renewable energy sources to power electricity requirements.

Malad’s biggest mosque, Noorani Masjid in Pathanwadi, witnessed a 45% drop in its electricity bill after adopting a rooftop solar system. With centralised air conditioning and a capacity to host over 5,000 devotees on any given day, power usage at the six-storey building used to come at a hefty price.

Today, a 25 kilowatt-power (kWp) solar power plant made up of 72 solar panels primarily focuses on catering to the consumption of 60-ton AC units along with lights and fans across all common areas.

During summer months, the system generates 110 units of electricity. This drops to 80 units during monsoon months. The annual generation of the plant is 35,000 units against the mosque’s annual consumption of 80,000 units from the grid. This allows the mosque to save an estimated Rs 4.3 lakh annually.

Trustees of the mosque said the electricity bill dropped from Rs 85,300 to Rs 37,400 post-installation. “We were facing huge difficulties with inflated electricity bills based on high consumption from our AC units. However, after witnessing the successful projects across south Mumbai and even in Bandra, we opted for this cost-effective form of electricity generation,” said Rashim Gulam Rasul Maredia, chairman of the trust that runs of the mosque.

This is the eighth mosque in the city to opt for renewable energy sources to power electricity requirements. Maredia pointed out that the mosque will directly be responsible for saving 17.5 tons of carbon dioxide emissions by using solar energy. “Our intention will be to spread this message to all our devotees, that safeguarding the environment is essential for a green future and for our coming generations,” he said.

The private company that installed the project said the mosque plans to move towards reducing 90% of their electricity bill by 2020. “We will be installing the second phase of the project which will add another 25 kWp as there is enough rooftop and shadow free spaces. During Ramzan, there will be a lot of AC consumption which will lead to high savings,” said Muhammad Sohail Shaikh, chief operating officer, MSS Green Tech.

The plant was installed at a cost of Rs 15.23 lakh, which is estimated to be recovered within the next three and a half years, said Shaikh. “An average of 90 to 95 units per day will be benefitted by a net metering system, which sends excess electricity back to the local power grid and the units are credited in return,” he said adding, “The mosque stands as an example for more such religious institutions to implement green energy.”