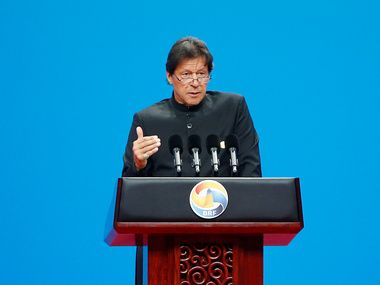 There is a very strange phenomenon afoot.

If this was a Sherlock Holmes mystery, it might well be called ‘The case of the war that didn’t exist’. The simple facts are these: Everyone from the Prime Minister of Pakistan downwards — or upwards, depending on your political views — is screaming loudly and persistently at every forum available of an approaching war. So much so, that there were many sensible people inside Pakistan itself who are convinced that India is readying itself to attack them from the rear, or just jump on them somehow.

The reality? Not a single soldier has been moved to the front. The reason? That an irresponsible media in the West has been giving top coverage to the ‘warnings’ of impending nuclear war from a prime minister who may not be at the top of his form.

Here’s what seems to have happened. Long belittled as a ‘selected’ prime minister by his detractors, and labelled as ‘crazy’ by even the moderates, Imran Khan returned to a hero’s welcome on his return from the United States in late July, where he had the presser of a lifetime with President Donald Trump. That incident will remain in the mysteries of diplomacy, but whatever the truth, it was a huge break for an embattled prime minister, who was being criticised for muzzling the press, throwing his opponents in jail, and submitting to the ignominy of having national accounts scrutinised for evidence of terrorist financing.

Not unnaturally, his media managers — and Director-General ISPR — ran with the ‘mediation ball’ for all they were worth. Ten days later, that ball turned out to be a bubble. India announced its plans to change a status given to Jammu and Kashmir by its own Parliament. Whether or not this constituted a just move will be pursued by legal eagles elsewhere. But it broke the ‘World Cup’ narrative for good. Khan reacted furiously with allegations of impending ‘genocide’ against Kashmiris – an ironic allegation when his army had bombed, strafed and fired upon ‘terrorists’ in the tribal regions.

Finding no response from India or anyone else, he upped the ante in his very first visit to PoK after he took office. Addressing the Assembly, he warned “The Pakistan Army has full knowledge that India has made a plan to take action in [PoK]. Like the action they took in Balakot after Pulwama, according to our information, they have made a more horrendous plan now… We will be ready, we will respond… we will go till the end.” There were shades of armageddon that would have sent chills up the collective spines of those who heard him. Worse, Khan took a step into what is surely unpardonable in any diplomatic rule book. He likened the Narendra Modi government to the Nazis.

As country after country backed the Indian government’s position that the Kashmir change was entirely its own internal matter, Khan seemed to become even more distraught. Even its ‘all-weather friend’ China initially only issued a statement regarding its claims on Ladakh. Foreign Minister Shah Mehmood Qureshi had to take a hurried flight to Beijing before China issued a rather anodyne statement calling for a ‘peaceful resolution’. It did take Pakistan to the UN Security Council knowing full well that no major country would have anything to do with a resolution against India.

That was a blow for Pakistan, and bravado was apparent in the declaration that Kashmir was at long last back on the UNSC table. By 23 August, the narrative shifted to ‘false flag operations’ — a phrase to denote that a terrorist strike in India (it as as-yet-unknown by whom) would be blamed on Pakistan, resulting in war. That was probably provoked by the general silence from Arab states with even the UAE supporting India. The worst was yet to come, with the awarding of the country’s highest honour by Bahrain to the visiting Indian prime minister. As he addressed the nation on that very day, Khan seemed disoriented and his speech was hesitant. All the ranting and raving seemed to be going nowhere.

The opportunity for redress came soon enough. Prominent US newspapers, stuck by the lack of news in August — generally known as the month of the doldrums — carried highly incendiary and insulting pieces by Khan and his ambassador. The prime minister ticked the box marked ‘Nazi ideology’ adding the Gujarat riots for good measure, lynching of Muslims, and blatant lies that any self-respecting newspaper should have fact checked — that “Thousands of Kashmiris have been arrested and thrown into prisons across India”.

The crowning craziness in this unrestrained rant was “If the world does nothing to stop the Indian assault on Kashmir and its people, there will be consequences for the whole world as two nuclear-armed States get ever closer to a direct military confrontation“. Unsurprisingly, overseas Kashmiris were thrown into confusion, assuming the worst, and demanding to speak to their relatives. After a month of threats and warning, the ‘N word’ seemed to have done the trick. It brought the issue up to the front.

There are likely many within the US administration and out of it, who would have been well aware of Pakistani tactics in times of stress. As the Indian Army battled its way inch-by-inch during the heights of Kargil, Islamabad carefully let it be known that it was deploying its nuclear weapons. The next day, Nawaz Sharif was in Washington, begging for an audience with then president Bill Clinton. In a significant break with the past, Clinton bluntly told him that Pakistanis were the aggressors, even itemising the army units involved in what was allegedly a war by mujahideen. That was the first time Islamabad’s strategy took a header.

Another instance was most recently after the Balakote strike, when Islamabad did a reverse act, probably with the assistance of a certain UN Security Council member. A single story from Reuters said, “A Pakistani government minister and a western diplomat in Islamabad separately confirmed a specific Indian threat to use six missiles on targets inside Pakistan.”  It went on to say that the news had been relayed to Washington leading to de-escalation efforts by Secretary Mike Pompeo among others. Pakistan again got what it wanted, which was assistance from outside powers at a time of crisis. It didn’t get much. But it was some measure of rollback on its earlier defeat.

This time around, Islamabad is trying a new strategy: A highly persistent and public blitz on what it would earlier have said in private to top leadership. Knowing full well that no one is really interested in Kashmir, and even less interested in annoying India, it has turned the tables on leaders everywhere, forcing them to issue a statement on the Kashmir situation. One such remark came from US presidential candidate Bernie Sanders. Other statements on the curfew, on removing restrictions, on human rights etc have followed, due solely to this public noise and bluster.

This is nuclear war gaming with a difference, in that its being played wholly without any foundation whatsoever.

Nuclear theorists need to study Pakistan’s style, which is studiedly crazy, undignified, and extremely dangerous for a country that is known to have the ‘fastest growing nuclear stockpile’ in the world. There is clearly a very fine brain working this strategy, with some specific objectives that need to be understood. Apart from trying to ‘internationalise’ the Kashmir issue, the core result sought through this strategy is to prevent India from again exploiting the space under a nuclear overhang to send a lesson in deterrence against terrorism. That was the essence of Balakot. It never ever mattered who, when or how many were killed. This was the first ever attempt at using nuclear weapons to deter asymmetric war.

If Pakistan’s ploy succeeds, there may never be another Balakot. But on the other hand, Islamabad is also being forced — inch by reluctant inch — to give up on terrorism. That lesson seems to be sinking in. Expect that the tirade will continue however, until everyone again gets even more tired of the Kashmir issue. Talk is cheap, and Islamabad anyway doesn’t have a dime to lose. Meanwhile, it is playing an extremely dangerous game. At any moment, the illusion may yet become the reality.