Home Crime Pakistan’s eminent culpability in the dilution of Article 370 relating to Jammu... 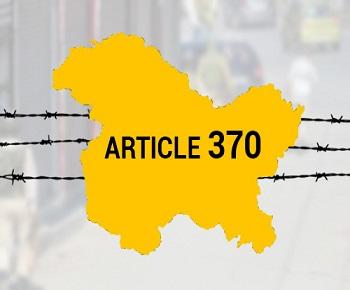 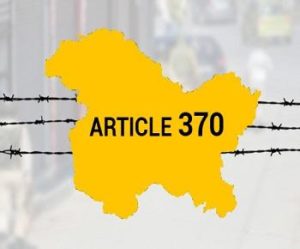 In a stark display of its escalating desperation and child-like frustration at being outplayed by the Indian government through its game-changing decision of 5 August to dilute Article 370 of its Constitution, Pakistani leaders have been running helter-skelter across the globe and indiscriminately telephoning world leaders, imploring them to intervene in a situation that Pakistan itself has, ironically, through decades of highly flawed policies and blatantly illegal actions, played a substantial role in bringing about. As questionable as the Indian moves to alter the constitutional status of the State of Jammu & Kashmir (J&K) and to bifurcate it were, especially the clampdown that is currently in place in J&K, how Pakistan has a locus standi on the matter is difficult to comprehend.

Commenting on this aspect, American scholar C. Christine Fair, who specializes on South Asia and is a credible voice on the region, asserted earlier this week that “Pakistan also has no locus standion this issue. India has an Instrument of Accession, according to which Pakistan is in illegal occupation of territory seized in the 1947-48 war and which it illegally ceded”. Not content with the parts of the princely State of J&K that it had seized illegally in 1947-48, Pakistan made several other military attempts to illegally grab even more territory from Indian Administered J&K, most notably in 1965 and in 1999.

As Kunwar Khuldune Shahid, the Pakistan-based correspondent for The Diplomat, put it, “Pakistan’s long-time approach to the dispute leaves little room for objecting to the Modi government’s power play… Pakistan’s fate in the Kashmir dispute wasn’t sealed in Washington or New Delhi. It was scribed, and regularly rewritten, on the drawing board at Rawalpindi (where the Pakistan Army is headquartered), over the past seven decades… Kashmir and civilian supremacy are the two fronts where the Pakistan Army has waged all its wars, simultaneously, albeit with contrasting successes. These wars, however, have had mutual causality, with the military establishment blatantly misusing the Kashmiri struggle to nourish its jihadist assets, which served its misplaced domestic and regional ambitions, and maintained its hegemony over the national exchequer… By establishing a radical Islamist umbrella linking Kashmir and Afghanistan, the military establishment kept the two regions geostrategically interconnected, with Rawalpindi exercising decisive influence over this multipronged jihadist corridor. Post 9/11, the United States coerced General Pervez Musharraf’s military regime to outwardly shun jihad as an ally in the War on Terror. This accelerated the now notorious “Good Taliban, Bad Taliban” approach, where officially banned groups like Lashkar-e-Taiba, Jaish-e-Muhammad, and Hizb-ul-Mujahideen continued to be backed by Pakistan to wage jihad on India. That eventually culminated in the 2008 Mumbai attacks, which signaled the death knell for Pakistan’s Kashmir position on the international arena”.

Pakistan has, meanwhile, not covered itself in glory in its handling of the parts of J&K forcibly and illegally held by it for over seven decades. While strongly protesting the Indian move to withdraw the autonomy that the State of J&K enjoyed and arguing that it would lead to demographic changes, Pakistan has totally lost sight of the fact that the Constitution that it drew for Pakistan Administered J&K prohibited “any opinion or action” that questioned the region’s “accession to Pakistan”. The Pakistani military clamped down brutally on any sign of dissent, and residents were subjected to repeated violations of their human rights. The severe restrictions that were placed on the media allowed Pakistan to get away with impunity.

Pakistan’s long and blemished history of supporting and sponsoring almost all the terrorist groups operating in J&K has also come back to bite it hard. Firstly, it is inhibiting any bite on the myriad baits that Pakistan is casting out several times a day, ranging from painting doomsday scenarios between India and Pakistan, appealing to the religious sentiments of the Organization of Islamic Countries (OIC), linking any solution in Afghanistan to support over the recent developments in J&K, and even comparing Indian Prime Minister Modi to Hitler while accusing the world of ignoring the threat that he poses. Secondly, this sponsorship of terrorism directed against India in general, and J&K in particular, is linked to most of the reasoning that India has put forth to justify its moves in J&K. The Indian government’s argument that dilution of Article 370 was aimed at curbing terrorism and promoting development in J&K, efforts towards which had been severely inhibited due to the insecure environment that terrorism bred, was not without logic.

It could be reasonably argued that the vicious cycle that sponsorship of terrorism by Pakistan had unleashed in J&K had become so unpalatable for the Indian government over such a prolonged period that it had little option but to change the status quo and create a fresh new environment by pushing Pakistan and its terrorist proxies out of the picture in Indian Administered J&K. Whether the Indian moves were prudent and whether they would succeed and yield the desired outcomes will only be clear in times to come. However, what is not at all ambiguous is that the self-serving policies on J&K that were adopted by the Pakistani military establishment have contributed directly and substantially to the dilution of Article 370. Hence, eyebrows are quite naturally being raised in several quarters over Pakistan’s shenanigans over a situation that it itself, in no small measure, forced upon India. Moreover, Pakistan’s actions have directly and adversely affected the interests of the people of J&K, whose cause Pakistan is now duplicitously pretending to agitate for.

Pakistan’s frenzied attempts at internationalizing the Indian actions on Kashmir and seeking the intervention of the United Nations (UN) have, given Pakistan’s track record as brought out above, not yielded much. Barring China, which is itself in the picture in J&K due to its control of Aksai Chin and the Shaksgam Valley, both parts of the erstwhile princely State of J&K, none of the major powers have evinced much interest in the hoarse Pakistani cries for intervention. Some, such as Russia and the United Arab Emirates (UAE), have unequivocally supported India. The lack of a robust response from the OIC, which has traditionally backed Pakistan over J&K but whose most influential members have built strong bonds with India in recent years and are attracted to the economic potential of the vibrant Indian economy at a time of declining oil prices, has rattled Pakistan the most. The advice Pakistan is receiving from most of its interlocutors is to resolve any issues that it may have over J&K bilaterally with India, as envisaged in the Simla Agreement of 1972 between the two countries. This has caused a dispirited Pakistani Prime Minister Imran Khan to question on 15 August the international community’s “silence”on the Kashmir situation, and dramatically say, “I want to warn the international community that if it allows this to happen, it will have severe repercussions and reactions in the Muslim world, setting off radicalization and cycles of violence”.

The UN was equally chary of getting swayed by Pakistani Foreign Minister Shah Mehmood Qureshi’s verbose and repeated communications, and also referred Pakistan back to the Simla Agreement. It chose not to take Pakistan’s demands for an emergency meeting of the UN Security Council (UNSC) on the J&K issue as seriously as Pakistan had hoped it would. A distraught Pakistan was then left with no option but to beseech the only country that is agreeable, for its own geo-strategic interests, to bail Pakistan out every time it finds itself in a fix, whether that be the United States’ (US) pressure to rein in Pakistan’s terrorist proxies or Indian pressure to designate Masood Azhar a global terrorist. China, which must be running out of fortitude at having to stand up for Pakistan and bail it out as frequently as it is constrained to, especially at a time when it itself is in the midst of a debilitating trade war with the US and has the precarious situation in Hong Kong to grapple with, nevertheless did oblige Pakistan, albeit halfheartedly. Chinese intervention has led the UN to agree to informal closed door consultations on J&K that is scheduled to be held on 16 August, but the J&K issue will only be one of several items on the agenda. None of the other 14 members of the UNSC have joined China in making the request for the consultations, which is a clear indicator of the lack of traction on the issue. Shah Mehmood Qureshi gave vent to the Pakistani establishment’s pessimism and frustration over this by urging Pakistanis to not live in a “fool’s paradise” by expecting the UNSC to “wait with garlands” to support Islamabad’s stand. He said, “Giving vent to emotions is easy and raising objections is much easier. However it is difficult to understand the issue and move forward. They are not waiting for you with garlands in their hands. Any members out of the P-5 nations can be a hurdle… Do not live in the fool paradise”.

Already discombobulated by the tepid response of the international community, Pakistan’s nervousness is compounded by the realization that the alternate options available to it are either undesirable or are fraught with danger. Despite being faced with a perilous situation that is charged with huge escalatory potential, outright war with India is something Pakistan dreads and will look to avoid. Reactivating terrorist proxies in J&K is also fraught with the risk of crippling sanctions by the Financial Action Task Force (FATF) and other international organizations, which Pakistan’s floundering economy can ill-afford.

Former Pakistani Foreign Secretary Riaz Mohammad Khan, while commenting on the options before Pakistan in an article in the Pakistani daily Dawn, wrote that “the heart of any dialogue process for normalization has been removed. The faint hope for a reasonable settlement based on optimum self-governance for Kashmiris and protection of vital interests of the two countries (India & Pakistan) is extinguished… Ahead lies a path fraught with tension, risks and dangers”. He lamented “the dismal predicament evident in our frail economy, political dysfunction, narrow technological and knowledge base. This state of affairs will also be dispiriting for the Kashmiris and for South Asian Muslims… Therein lies the greatest challenge we face as a society, as a nation and as a country”.