Home INDIA PM Modi: All incidents of lynching, whether in Jharkhand, West Bengal or... 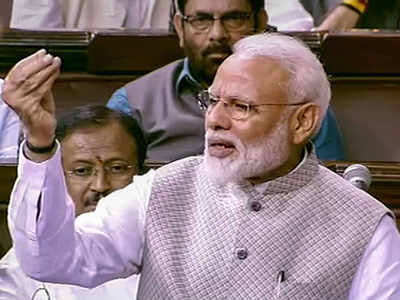 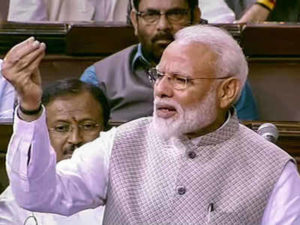 NEW DELHI: Prime Minister Narendra Modi on Wednesday broke his silence on lynching of a Muslim youth in Jharkhand, saying it has pained him and the guilty must be severely punished, but stressed that all incidents of violence in the country, whether in Jharkhand, West Bengal or Kerala, should be treated the same and law should take its course.

Addressing Rajya Sabha, he also spoke on the death of over 130 children this month from Acute Encephalitis Syndrome (AES) or ‘brain fever’ in Bihar saying it was a matter of “shame” and the “biggest failure” of seven decades that outbreak of such disease continues to kill even after so many years of independence.

Last week in Jharkhand young Tabrez Ansari was forced to shout ‘Jai Sri Ram’ and ‘Jai Hanuman’ while he was assaulted. He was arrested and then he died. Today Prime Minister Narendra Modi has said in Parliament that this lynching pained him. Beyond this, he should send down the strongest possible message that police and other authorities should have zero tolerance for mob violence. And stop punishing the victims.

In his over an hour-long reply to the debate on Motion of Thanks to President, Modi launched a blistering attack on the Congress saying it was sheer arrogance of the grand old party which is unable to accept its defeat and continues to question the mandate of the people through attacks on EVMs.

Modi, who received flak from the opposition over his ‘silence’ on the lynching incident in BJP-ruled Jharkhand, said “security of every citizen is our constitutional duty”.

“The lynching in Jharkhand has pained me. It has saddened others too. Guilty should get severest punishment but for this the entire state has been pronounced guilty and everyone put in dock, which is not right,” he said.

A Muslim youth, accused of stealing a motorcycle, was beaten up by a mob and a video showed that he was purportedly made to chant ‘ Jai Shri Ram’ and ‘ Jai Hanuman’ in the Saraikela Kharsawan district of Jharkhand. He later died.

The Prime Minister said some people in Rajya Sabha are calling Jharkhand a hub of lynching . “Is this fair? Why are they insulting a state.”

“None of us have the right to insult the state of Jharkhand,” he said and referred to violence in states ruled by opposition parties.

“All kinds of violence whether in Jharkhand or West Bengal or Kerala should be treated as same and law should take its course,” he said.

The BJP has been alleging that its workers are being targeted in political violence in TMC-ruled West Bengal and in Kerala, where the Left Democratic Front is in power.

On the death of children in Muzaffarpur district of Bihar where BJP and its ally JDU are in power, he said the Centre is extending all help to the state to fight the problem.

“In modern times, such a situation is a matter of pain as well as shame for all of us,” he said. “This is the biggest failure in last seven decades and we should take it seriously.”

Modi, who had targeted the Congress during his reply in Lok Sabha on Tuesday, accused the opposition party of heaping “insults” on the people of the country by calling their decision to give a thumping majority to the BJP as “a defeat of the country, democracy and farmers”.

Congress leaders, he said, are saying farmers were sold out to Rs 2,000 cash dole and the elections were won with the help of media.

“This is an insult to farmers. A farmer is not available for sale. Farmers cannot be insulted. The use of language that they were sold for Rs 2,000 is an insult to 15 crore farmers,” he said.

Countering the opposition charge of media bias during elections, he said, “Is media on sale. Was it on sale in Tamil Nadu and Kerala (where Congress and its allies won).”

The Prime Minister also took the Congress to task for its “clamour for credit” saying why it was not doing so in case of National Register for Citizens as it was first agreed to by the then Prime Minister Rajiv Gandhi in the Assam Accord.

NRC is not a vote bank issue for this government. It is an issue of national security, he said, adding the move to list citizens and identify outsiders was done on the orders of the Supreme Court.

With 22 bills lapsing as Rajya Sabha did not pass them before the term of the 16th Lok Sabha ended, Modi said the Upper House is part of the federal structure of the country and the members must introspect and cooperate in framing of crucial legislations.

While the BJP has an absolute majority in Lok Sabha, it along with its allies lack the numbers in Rajya Sabha, which has led to stalling of some legislations including on Triple Talaq and making Aadhaar an optional ID proof for obtaining mobile sim cards and opening bank accounts.

Parties which obstructed constructive government work in Rajya Sabha have been punished by the voters in the recent general elections, the Prime Minister said.

Modi quoted former President Pranab Mukherjee that opposition has a right to question but not obstruct as he sought protection from the Chair to help government get through important legislations.

“We don’t have majority in Rajya Sabha but verdict of the people should not be throttled in the House,” he said adding opposition parties in the Upper House got special pleasure in “demeaning” the government.

Taking a jibe at leader of opposition Ghulam Nabi Azad, he said during the debate some people demanded a return to ‘Old India’ instead of the ‘New India’ where technology is being used to ease lives and end corruption.

“Do they want an Old India where Cabinet decision is torn in a press conference, where Navy assets are used for picnic, where scams are order of the day, where ‘ tukde-tukde’ (separatist) gang gets support of leaders, where middlemen are required for railway tickets, MP’s letter is needed for gas connection, where interviews are held for low-level jobs such as peon in a government department and there is rampant inspector raj,” he said.

The citizen of the country are not willing to go back to the old India, he said adding the ‘new India’ is destined to come.

Modi said while Sardar Vallabhbhai Patel was a Congress leader, it is his party’s belief that had he been the first prime minister of the country, there would not have been any Jammu and Kashmir problem.

Taking a swipe at the Congress, he said Patel was their party leader and they should at least once go to the Statue of Unity in Gujarat to pay homage.

On the Congress’ claim of Indian economy expanding by only USD 0.8 trillion to US $2.8 billion in five years, he said under his rule the economy has expanded by nearly half when compared to US $2 trillion added in 60 years of Congress rule.

Stating that water shortage was a growing crisis, he said 226 districts have been identified where there is a shortage and MPs should use their area development fund to help tide over the problem.