Home INDIA PM Modi’s UN Speech: India has given Buddha and not war to... 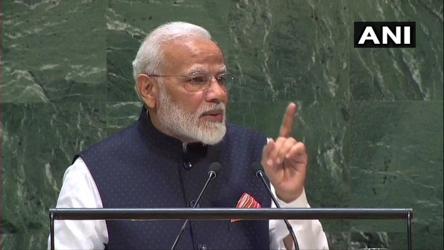 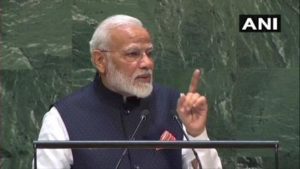 Prime Minister Narendra Modi, in his address to the United Nations General Assembly in New York, said his government’s efforts were aligned with the universal developmental goals and were inspiring the world. He also exhorted the world to unite against terrorism as it was against the values of United Nations.

“A world divided by terrorism, hurts the very principles on which the UN was founded, therefore for humanity’s sake, I consider it necessary for the entire world to unite against terrorism,” Prime Minister Modi said.

Harmony and peace were India’s message to the world, said the Prime Minister and added, “We are citizens of a country that has given message of peace, Buddha to the world and not wars,” he said underlining India’s credentials to speak with “seriousness” and “anger” on the issue of terrorism.

“India was several thousand-years-old civilisation and has historically believed in welfare for all, that is the crux of our slogan of Sabka Saath, Sabka Vikas and Sabka Vishwas,” the PM added.

Building on the theme, he said the issues being addressed by India were reflected in the prevalent Global issues and challenges. “While 130 crore Indians are at the centre of our government’s efforts, but the dreams they serve, belong to the entire world, all nations and every society,” Modi said.

Touching upon the threat of Global warming, the prime minister said India’s contribution was second to none despite not being a major contributor.

“While India’s historic & per capita emission contribution to Global warming has been minimal, yet it is among the leading nations fighting it,” he said.

He listed some of the initiatives by his government to further stress on India’s alignment with the global developmental values.

“I am happy to say that India is running a campaign to rid the country of single-use plastic and in the next five years, we will add 15 crore Indian households to water supply and build 1.25 lakh kilometre of roads to connect people ,” Modi said.

I invite countries to join India’s Coalition for Disaster Resilient Infrastructure initiative, which aims to create infrastructure that can withstand natural calamities, he said.