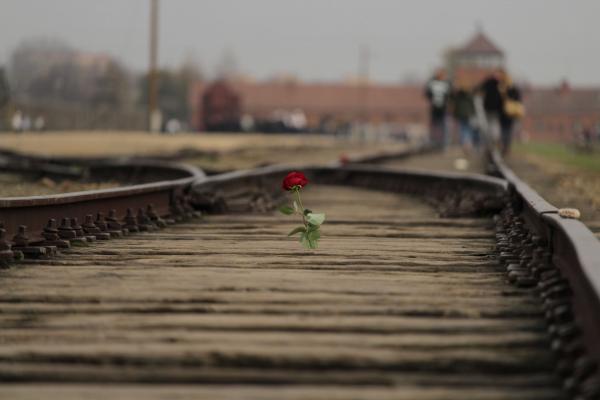 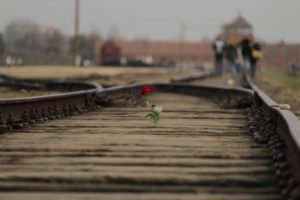 Sheila Sonnenschein had never been to Auschwitz, but last week, she and her daughters gathered at the infamous concentration camp for a memorial service honoring those who had been killed there. They stood hand-in-hand with 50 other Muslim and Jewish women and teen girls, the first-ever North American contingent to make such a trip. Sonnenschein, a Jewish woman from Kansas City, Mo., had grown up with the legacy of the Holocaust and carried with her the loss of her father’s extended family, who were murdered by Nazi and Latvian soldiers.

The Sisterhood of Salaam Shalom — the organizer of these Building Bridges trips — is the brainchild of Sheryl Olitzky and Atiya Aftab. The Sisterhood strives to build trust and respect between Muslim and Jewish women and teenage girls across Canada and the United States. They hope to foster relationships that will, in turn, encourage greater understanding among these communities, and to promote collaboration against an increasing tide of hate.

“I knew I could not change history,” Olitzky explained. “But…it was my goal to ensure that the hate of the past was not continued into the future.” Since that first meeting ten years ago, the Sisterhood has grown to over 170 local chapters and more than 3,000 members.

The group gathered in Berlin, where women met one another and shared their reasons for participating. They toured memorials, learned about non-Jewish victims of the Nazis (including Muslims), and visited Syrian refugees. They attended prayer services at synagogues and mosques and spoke with a local organization developing curricula to combat anti-Semitism. In Krakow, they met with Muslim, Jewish, and Christian leaders and helped clean up a vandalized Jewish cemetery.

Margaret Johnson, a convert to Islam from greater Washington, D.C., said she wouldn’t have made the trip without the support of her Muslim and Jewish sisters. “I wanted to be there to support my Jewish sisters and [understand] the Shoah from their perspective,” Johnson explained, acknowledging that the experience hits that much harder “when you know people affected [by the horror].”

Recently, Johnson was a guest in the home of an older Jewish woman she befriended on a previous Building Bridges trip. As a child, this woman lost several of her extended family members in the Holocaust and has dedicated her life to honoring their memory. Touched by her friend’s devotion, Johnson carried the names of those family members with her and read them aloud at the memorial service at Auschwitz.

Though much of the trip was spent studying the past, at no point was the connection to present day more striking than when the group returned to their hotel after Auschwitz and turned on CNN. The news segment featured the detention centers along the U.S.-Mexico border and the deplorable conditions there. Though Johnson is quick to point out that in today’s “call-out culture” people should be mindful of their words, she maintains that the dynamics that gave rise to the Holocaust inform what is happening today. “Some of what happened to the Jews early on in Germany is now happening to asylum seekers in the U.S.,” she said. Johnson insists that she doesn’t believe that the United States’ end game is anywhere near comparable to that of Germany in the 1930s, but whether it’s the current administration’s handling of refugees, the persecution of Muslims in Myanmar and China, or the rise in hate crimes since the 2016 presidential election, the theme is the same, the dehumanization of others.

Miniimah Bilal-Shakir, a Muslim sister from New Jersey, agrees. “Though the majority of the victims of the Holocaust were Jewish, the Nazis didn’t only kill Jews. Theirs was an attack against all of humanity.” A warning, in other words, about what happens when we don’t stand up to hate.

Dr. Mehnaz Afridi, Director of the Holocaust, Genocide and Interfaith Education Center of Manhattan College and the trip’s resident educator, sees particular significance to this trip being taken at this moment in time. Both the U.S. and Europe are experiencing elevated Islamophobia and anti-Semitism, making this trip a “perfect synergy in bringing Jewish [and] Muslim women to historical moments of persecution, suffering, and reconciliation.

Both Johnson and Sonnenschein participated in the Sisterhood’s 2018 Building Bridges trip to the American South, and since then, they’ve noticed encouraging change. Meeting with former leaders of the Civil Rights movement, Sonnenschein was struck by the idea of reparations to African-American communities. Upon returning home, she connected with a mentoring program and now volunteers weekly in a predominantly African-American elementary school. Three other women from local Sisterhood chapters have joined her.

Johnson reports that the group from the 2018 trip are in constant communication about ways they can act upon what they learned and are engaging in initiatives dedicated to getting out the vote, educating the public about civil injustices — particularly surrounding the disproportionate incarceration of African Americans — and supporting those targeted by hate crimes.

Participants in this year’s program have barely touched down after their overseas flights, but the group texts are already flying. Women want to know how to act upon what they’ve spent the last week immersed in: standing up to hate and being an ally to those in need.

“What we learned was devastating,” said Bilal-Shakir. “But it’s important to move past that horror and find hope.”

Several sisters have committed to helping children and asylum seekers at the border, and others wish to help Muslims being victimized in China. Gabriella Sonnenschein, a student at the University of Minnesota, wants to create projects to dismantle Islamophobia and promote better Muslim-Jewish relations on campus. As an organization, the Sisterhood of Salaam Shalom has committed to opening its first-ever chapters in Krakow and Berlin, spreading its mission of respect, understanding, and relationship-building to these communities.

Heather Ciociola, a Jewish woman from New Jersey, knew she had to attend this trip, both for its historical significance and relevance today. “We have both the knowledge and the responsibility to make sure that the horrors of the past don’t even come close to repeating themselves,” she said. One day, Ciociola anticipates someone asking her what she did in these times of turmoil and hate. She is dedicated to ensuring her answer is one she can be proud of. Those who understand the origins and legacy of the Holocaust must do all they can to prevent the perpetuation of hate. In Ciociola’s words: “Our history is being written today.”

The chance to ensure Never Again is now.