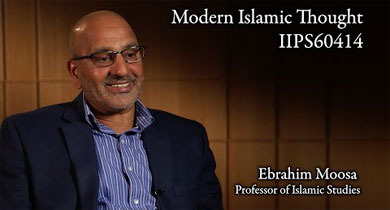 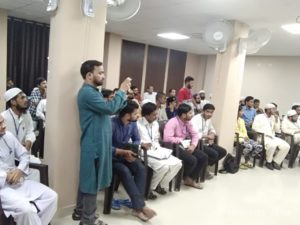 Recently, the University of Notre Dame of Indiana launched an initiative called “Contending Modernities”, a cross-cultural research and education initiative examining the interaction among Catholic, Muslim, and other religious and secular forces in the world. Part of this global initiative is a 3-year experimental research project known as “Madrasa Discourses” focused on the modalities of reconciliation between the traditional Islamic thoughts and contemporary scientific and philosophical worldviews. 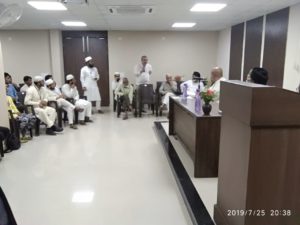 In this program, graduates and young theologians of madrasas, mostly from India and Pakistan, are exposed to what they call ‘critical traditionalistic’ approaches to the Islamic traditions, as introduced by the early madrasa curriculum in the Indian subcontinent. The rationalistic style of scholastic engagements with theology (Ilahiyaat) and Islamic philosophy (Kalam), which was historically the actual task of the early madrasas of the Dars-e-Nizami curriculum in the view of the project coordinators of the Madrasa Discourses, is being revitalised in this program.

In the words of Professor Mahan Mirza, a former faculty for the Madrasa Discourses who is now the executive director at Ansari Institute of Global Engagement with Religion: “The program’s vision is to revitalize a conversation commensurate with the intellectual currents of our time”. A great amount of emphasis is laid on the scholarly underpinnings of classical Islamic thinkers on tradition (Riwāyat) and authenticity (Haqqaniyat or Asālat). In a nutshell, the classical Islamic concept of tradition, known in Arabic as Turāth(which also means “heritage”), is the solid foundation laid below ground to support and strengthen the entire edifice of the Madrasa Discourses. To them, the authenticity (Asālat) of a tradition lies in its exact transmission from one generation to another with responsibility (Amānat). However, it does not prevent them from resorting to creative re-thinking (Ijtihad) for the construction of ‘new knowledge’ in an intellectual effort to address various issues of their societies. This is what catches the imagination of modern graduates of Indo-Pak madrasas, mostly youths in their 30s, in the academic exercises of the Madrasa Discourses. 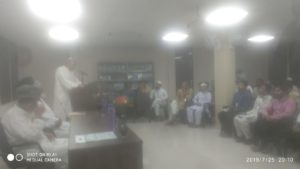 Bringing together the scholastic theology (Ilmul Kalam), Big History and modern philosophy, the program is aimed to achieve the re-union of Islamic faith and revelation with reason and contemporary philosophies ushering in an era of Islam as a ‘living tradition’. Ebrahim Moosa, Professor of Islamic Studies at University of Notre Dame, who co-directs the “Contending Modernities”, and is the Director of the Madrasa Discourses visited India in the third week of July on the successful completion of the first batch of participants in the program. On this occasion, he was invited to several institutions like Jamia Millia Islamia for his lectures on the related themes. On July 25, one such lecture was organised by Indian Institute of Islamic Studies at the headquarters of Jama’at-e-Islami Hind, Abul Fazl Enclave in New Delhi.

Maulana Dr. Raziul Islam Nadvi of the Jamaat-e-Islami Hind introduced Prof. E Moosa to the students enrolled at the two-year course on “Comparative Religion” at this institute of Jama’at-e-Islami Hind. At the very outset, Dr. Raziul Islam spoke on his enchantment with Prof. Moosa’s seminal work “What is Madrasa?” which was published in 2015. “This is an essential reading on South Asia’s traditional Islamic seminaries for the European and American audience”, he said. He also talked of Moosa’s contributions on the medieval Islamic thought, with special reference to his major work on the 12th-century Muslim thinker, Abu Hamid al-Ghazali (d. 1111). “The prize-winning book “Ghazali and the Poetics of Imagination” (University of North Carolina Press, 2005) was awarded the Best First Book in the History of Religions by the American Academy of Religion”, he said.

In his introduction to Prof. Moosa, Dr. Raziul Islam gave reference to another Islamic scholar and author Dr. Akram Nadwi, the Dean of Cambridge Islamic College, deporting his memory back to the times he spent with Prof. Moosa and Dr. Nadwi as classmates in Nadwatul Ulama, Lucknow.

Dr. Razi went on to say that aggressive social media campaigns against the Madrasa Discourses program which are underfoot on several Facebook pages and WhatsApp groups in India and Pakistan, more particularly after a symposium on the MD at Jamia Millia Islamia has successfully completed in presence of renowned and acclaimed Muslim intellectuals, are just pointless and one should not pay heed to them. He expressed gratitude to E. Moosa for accepting the invitation to speak at the Jama’at e Islami Hind. This was reciprocated by Maulana Jalaluddin Umri, Ameer of the Jama’at and Dr. Hasan Raza, course coordinator of the Indian Institute of Islamic Studies.

In an hour-long address, Prof. E. Moosa expounded the key issues and challenges that the Madrasa graduates encounter during and after their student life. Elaborating his idea of Madrasa Discourses and why this is a profound opportunity for the new generation of ulema in India and Pakistan, he recalled his first encounter with Dr. Fazlur Rahman and his momentous work known as “Islam”, which is among the rarest books that depict a ‘big picture’ of Islam. With an incisive and surprisingly comprehensive history and analysis of Islam—history, legacy, conflicts and prospects— Fazlur Rahman introduces an Islam that is not known to many—Muslims and non-Muslims alike.

Dr. Moosa then linked it to Dr Abdul Haque Ansari, an Indian Islamic scholar and the Amir of Jama’at-e-Islami Hind (2003-2007) who established the Indian Institute of Islamic Studies in New Delhi to train graduates from secular educational background in Islamic sciences and the madrasa students in a modern curriculum. Ansari wrote extensively on Sufism and Shariah and attempted to present a synthesis of Sufi and Fiq’hi thought, especially what he termed as ‘Tatbiq’ (reconciliation and coherence) of Shah Waliullah and Shaikh Ahmed Sir Hindi’s thoughts. Moosa said that Ansari greatly contributed to the Islamic world in terms of knowledge and thought.

In the main part of his lecture, Prof. Moosa chose to focus on the “Reconstruction of Islamic theology (Ilahiyyat)” as the pressing need of the time for the constant renewal of Islamic tradition. He said he envisioned the program for the madrasa graduates to supplement their classical Islamic studies with an essential literacy in the modern secular fields of knowledge. He recalled how in the pre-colonial times, Indian madrasas made use of the Ma’qulat (rational sciences) as keys to understanding the scriptural texts in the medieval context.

He also highlighted how classical Islamic textbooks were heavily influenced by Aristotelian philosophy and metaphysics, to the extent that it was difficult to distinguish between what was ‘Islamic’ and ‘un-Islamic’ in their tradition. So much influence from the Greek philosophers enabled the ulema to conceptualise their theological discourses, he said.

But what we oftentimes hear from the present-day ulema is that the “Islamic thought is in crisis”. The prevailing perception of ‘decline’ (Zawal in Urdu) deeply steeped in the psyche of the Ummah is held accountable for every problem we face today. We don’t look at Islamic traditions with the historical methodology. Even if we do that, certain ideologies come into play, Moosa lamented. He continued: What has maintained Islam is the ‘intellectual tradition’ which is lost to the madrasa circles today. Only identity is being formed in today’s madrasas which have become like the ‘Republic of Letters’. Modern sciences are introduced as ‘heresies’, while in the past, Greek Philosophy was studied in the traditional madrasas which was completely fine-tuned and beneficial. They tried to make small intellectual adjustments in order to achieve the best and desired results.

Moosa glanced through the works of Sufi philosophers like Shahabuddin Suharwardi, Ibn Arabi, Mulla Sadra, Allama Taftazani, Allama Jurjani, Muhaqqiq Dawwani and Maulana Siyalkoti in order to substantiate how they formed the main body of the Islamic scholastic tradition (Ilm ul Kalam). Thus, he introduced an interpretive framework of the reconstruction of the religious thought in Islam, contending that tradition is a ‘living entity’ in which the scriptural texts are being dealt with different interpretations.

Prof. Moosa recalled that during his Nadwa times, he did not just focus on the Islamic textbooks (darsiyat) but also looked up to other scholars’ works like the books of Maududi, Khumaini’s Iranian revolution, IkhwanulMuslimin’s movement, and all benefitted him in intellectual ways, he maintained. Later in his journalistic career, he became explorer of the new doors to knowledge. Dr. Fazlur Rahman’s book “Islam” which revolutionised his thought process as it presented Islam in a historical methodology did not prevent him from differing from several ideas of Rahman. The book benefitted him even in the anti-apartheid movement in South Africa, his hometown.

But regrettably for most madrasa graduates and ulema today, their age-old curriculum has clear answers for every emerging issue in modern society, Moosa said, terming this method as the ‘McDonaldisation of Islamic teachings’ and ‘the fast-food version of Islam’. Thus, Moosa criticized the “Quran-and-Hadith-only” approach to address the modern issues. This ‘quick-made Islam’, he said, will not help us find the solutions. Citing Ghazali as an example, Moosa pointed out that an authentic and exhilarating tradition always interacts with the current realities to redefine itself.

In his concluding remarks, Prof. E. Moosa said: “In search of authenticity (Haqqaniyat), the sense of responsibility which is called Amanah in the Qur’anic terminology, is the most important. We limit our understanding of the religious tradition to the Qur’an and Hadith so much that the big picture of Islam is missing today. The exclusivist Qur’an-and-Hadith approach continues to cause the ulema to reject the rational sciences in the madrasas like the Greek Philosophy. It is unfortunate that the books on Mantiq (logic), Falsafa (philosophy), lisaniyat (linguistics) etc. were replaced by the maximum portion of the Quranic exegesis and Hadith commentaries. Therefore, we need to revisit the history in order to understand our tradition. Every age had a different context for the Divine revelation. Only critical thinking can make the traditionalist thought in full synergy with the present times.

This lecture ended with a Question and Answer session in which he stated, in response to some questions, that only in the Salafi Madrasa curricula some changes and modifications are seen. But no tangible chan  ge has been seen in the Dars-e-Nizami curriculum and system of the Barelwi and Deobandi madrasas. “It’s not okay to provide second-rate education in religious studies just as in secular subjects”, he said.

Why can’t 80 percent of the madrasa graduates be well versed in Arabic and Persian today? Why can’t they be masters in Urdu prose and poetry,Moosa asked. Only four percent of them are enabled to make use of the courses they study in the madrasas. If the madrasa graduates are well versed even only in the classic Islamic studies and Arabic and Persian languages, they can work wonders. But even if you fly to the moon, you can’t run away from maternities, he added.