Home Crime Reasons why equating Kashmir with Palestine is grossly unjustified and untenable! 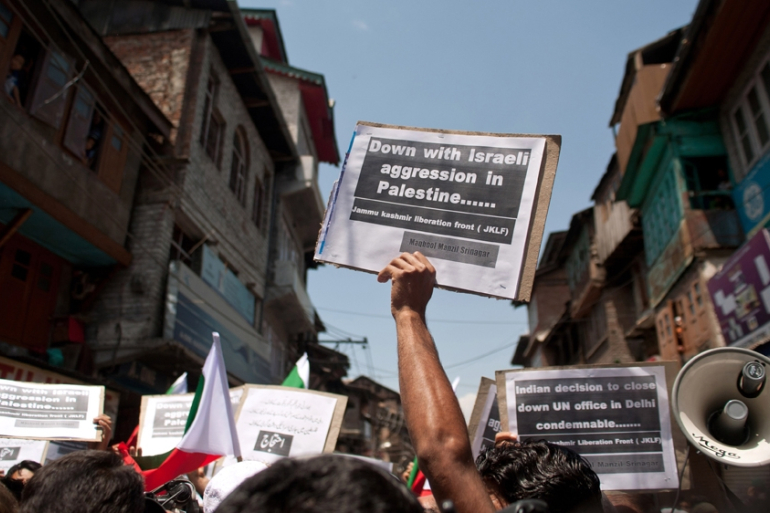 The recently concluded Yaum-E-Quds (Quds Day) has again witnessed Pakistani propagandists attempting to equate the Palestinian issue with that of Kashmir.

The tendency to liken the Kashmir dispute with the Palestinian conflict is not new. Pakistan has long sought to hyphenate Kashmir and Palestine on international platforms. It has thus been trying to transform a political issue into a radical Islamist movement. This is precisely what Pakistan has been doing on the Quds Day, by exerting every possible effort aimed at the internationalization of the Kashmir issue through ‘Islamisation’. But portraying the Kashmir issue as religious conflict is not only misleading, but rather it also feeds violent extremism, as it removes them from the sphere of negotiations and diplomacy into an apocalyptic war.

There may be some points of similarity in the two conflict zones but to seek their comparison on the basis of religion—Islam, without delving into the contextual differences between the two cases, is grossly misleading.

The major points for similarity between the conflicts in Palestine and Kashmir, which are commonly given, are as follows: (1) Right to self determination, (2) Negation of elections that express the popular will; and (3) ‘Terrorism’ expressing popular grievances. An objective analysis makes it patently clear that the two different conflicts are of completely different natures and are in two entirely different regional and historical settings.

The goal of self-determination has always been sought by nationalist movements against colonialism. The celebrated 1960 UN General Assembly Declaration on the Granting of Independence to Colonial Countries and Peoples (Resolution 1514) emphatically declared that “the further continuation of colonialism is a crime which constitutes a violation of the Charter of the United Nations.” Between Kashmiris and Palestinians, the idea of self-determination is differently conceived. The Palestinians are people displaced from their territories for more than fifty years.

Even under the Oslo process they have gained a mere semblance of “Self-Rule.” This does not apply to the Kashmiris and this logic, if stretched further, could lead to ridiculous results in India, a land of diversity where every area has a distinct identity. At the international level, there is now a certain reluctance to pursue this issue. The Yugoslav disintegration has demonstrated confusion in how much support should be given for self-determination, and where this support should end. No one can argue that every community with a claim to its own identity should have its own state. There are, for example, more than four thousand languages, but no one visualizes as many states. No wonder that the then British foreign secretary Douglas Hurd declared: “I hope we do not see the creation of any more nation states,” in a meeting at the Royal Institute of the International Affairs in London, in June 1993.

The idea of representative government was one of the ideals of the ‘Enlightenment’ and elections were sought to provide ways and means to realize this ideal. The hardliners have come to reject them. The Palestinian hardliners reject not the elections to the PNA (Palestine National Authority) but the resulting peace process, which has altered nothing on the ground. For the Kashmiri hardliners, the issue of rejection goes further than just opposing any sort of process. It is a question of legitimacy for them because, without participating in the electoral process, their claim to be the true representatives of the people stands unsubstantiated and untested.

There is a major difference between the nature of terrorism in Palestine and Kashmir. Regarding the former, the international community seems to have arrived at the conclusion that first, it is the Palestinians who are engaged in these acts and, second, that terrorism here is inextricably linked to the continued Israeli occupation of their homeland which should be handed back to them. The problem of terrorism in Kashmir leads to no such conclusions. It has been conclusively established in a US Department of State report of 1999 that there is a definite link between those fighting in Afghanistan and Kashmir. This was much before September 11 and the ousting of Taliban, and the situation remains as alarming now as in the past.

Moreover, the Palestinian conflict is more comprehensive and volatile, because of its linkages with the internationalization of “Islamic terrorism.” It has been evoked by various aggressors from Saddam Hussein during the Gulf War to Osama Bin Laden to justify their aggression. Even if the linkage-clause is brushed aside, the extent of the humanitarian crisis should compel the world leaders to ponder over its resolution. The Kashmir dispute has a much lesser ambit and the reason why it has hogged the headlines is due to it being caught between two nuclear states—India and Pakistan—having opposed claims on it. All this puts the case of Kashmir on a completely different pedestal from that of Palestine.