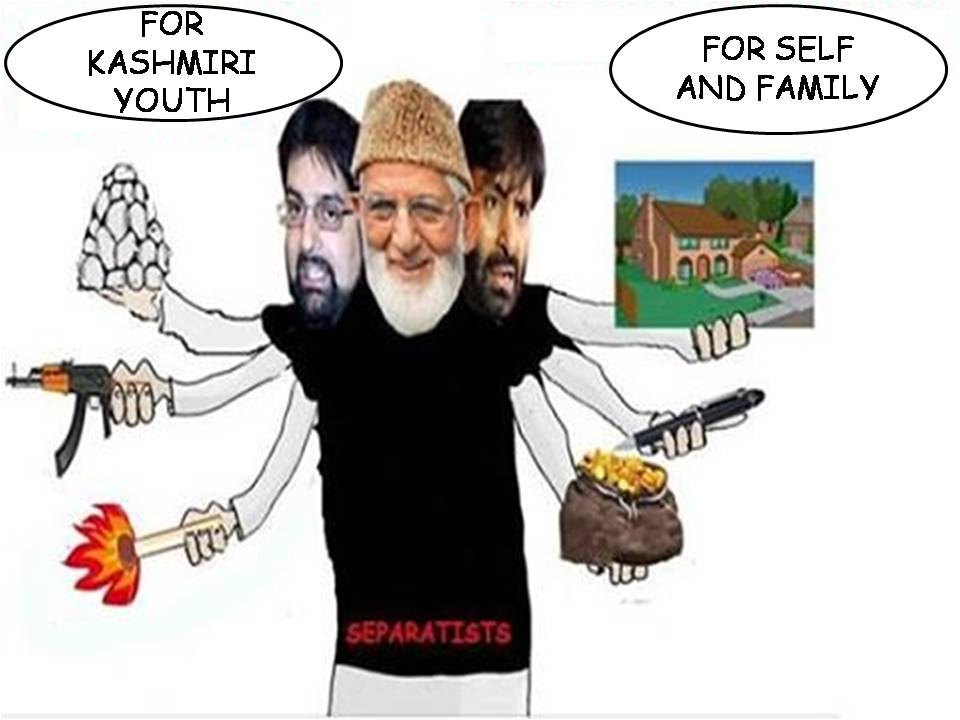 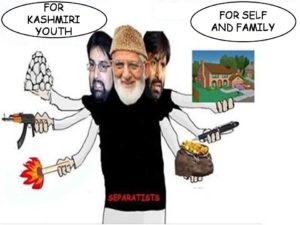 The spiritually inclined Muslims of Jammu and Kashmir have traditionally understood the message of Islam much better than the ISJK and Hizbul Mujahideen exclusivists who present Islam as a totalitarian, fascist, political ideology of world domination, which seeks to eliminate all the scores of religions. This is the reason why even those Kashmiri politicians who now advocate secession have contested elections for the legislative Assemblies constituted under India’s secular and progressive constitution. This is the reason why only a few Kashmiri youth have taken to the path of terror, which is falsified as Jihad. Most of the terrorism seen in the state of Jammu and Kashmir has been part of a proxy war waged by neighbouring Pakistan for its own ends.

Dr Ayman al-Zawahiri, you should have sought to understand the philosophy of Kashmiriyat that reigns in Kashmir before writing your latest missive. The Muslims of Kashmir have traditionally understood the message of Islam much better than the fundamentalists and exclusivists who present Islam as a totalitarian, fascist, political ideology of world domination, which seeks to eliminate all the scores of religions sent by God before Prophet Mohammad. This is the reason why even those Kashmiri politicians who now advocate secession have contested elections for the legislative Assemblies constituted under India’s secular and progressive constitution. This is the reason why only a few Kashmiri youth have taken to the path of terror, which you call Jihad. Most of the terrorism seen in the state of Jammu and Kashmir has been part of a proxy war waged by neighbouring Pakistan for its own ends. Pakistan, of course, has turned export of terrorism to a fine art, affecting all corners of the globe.

You have spent a better part of your letter castigating Pakistan’s intelligence agencies. It is these agencies that are protecting you, as they protected your predecessor Osama bin Laden till his last breath. This could be considered ingratitude of the highest order, and therefore akin to kufr, as in Islam ingratitude and kufr are virtually synonymous. But, it’s more likely that having failed in luring Kashmiri youth to take to the path of terrorism, it is these agencies that have protected you since 9/11, have now given you the task of luring Kashmiri youth in the name of a manifestly false doctrine of Ghazwa-e-Hind. They must have allowed you to scold them so that people don’t associate their disrepute with your statements. Then, you may gain some of the credibility that they rightly lost.

However, as I told you before, Kashmiri Muslims, even the youth, understand the message of Islam and the concept of Jihad much better than you seem to think. It is common knowledge here, for instance, that even the founder ideologue of Jamaat-e-Islami Maulana Abul A’laMaududi had refused to consider Pakistan’s covert, proxy war as Jihad. Along with Syed Qutb, Maulana Maududi is considered the main inspiration behind modern-day so-called Jihad. And yet, despite his own extremist, political view of Islam, he understood Islam better than to accept covert, proxy war waged by Pakistan as Jihad. He was so clear in his understanding of the rules of Islamic Sharia for Jihad that he was willing to face capital punishment for expressing his views.

According to his son Maulana Haider Farooq Maududi, “Maulana Syed Abul A’laMaududi had categorically stated that according to ‘Quran’, it is unlawful to wage a war by a country against the country with which diplomatic relations are maintained. He has further said that if one party commits breach of agreement then the opposite party should first sever diplomatic ties with it and then resort to war-tactics instead of maintaining diplomatic relations overtly and resorting to war-tactics covertly. He stressed that Islam taught ‘us’ that if we, want to fight against anyone, ‘we’ should fight openly and if ‘we’ wish to maintain friendly relations with someone, ‘we’ should stick to that relation without any prejudice.” (Maulana Syed Abul A’laMaududi’s interview published in the bi-weekly journal of Jamaat-e-Islami, “Kausar” dated August 17, 1998)

Your complete lack of understanding of Islamic Sharia becomes apparent from your repeated exhortation to Kashmiris to consider terrorism in Kashmir as Farz-e-Ayn (compulsory duty for every individual Muslim). You don’t seem to have even the most elementary knowledge of what is Farz-e-Ayn. Let me quote to you some brief definitions of Farz-e-Ayn from two of the most important schools of fiqh (Islamic Jurisprudence). Ibn Aabidin said (Hanafi Fiqh): “Jihad becomes Farz Ayn if the enemy attacks one of the borders of the Muslims, and it becomes Farz Ayn upon those close by. For those who are far away, it is FardKifaya (collective, communal duty). In Hashiyatad Dussuqi (Maliki Fiqh) it has been said: “Jihad becomes Farz Ayn upon a surprise attack by the enemy.”

In view of these most authentic Sharia rulings, Jihad may have become Farz Ain for Kashmiris on 22 October 1947 when armed Pakistani frontier tribesmen along with Pakistan’s regular troops invaded the State with a view to annex it. These local tribal militias and irregular Pakistani forces moved to take Srinagar, but on reaching Baramulla, they took to plunder, murder and rape. And indeed, Kashmiris did perform this Farz by fighting against these marauders to the best of their ability.  Unable to withstand Pakistani forces on his own, the then ruler of the state with which Pakistan had signed a standstill agreement, pledging non-interference in the affairs of the state, Maharaja Hari Singh made a plea to India for assistance. Indian forces did come to rescue Kashmiris, but after the Maharaja signed an Instrument of Accession to India, making the state of Jammu and Kashmir, an integral part of India.

Dr. Zawahiri, you should know that this history is very well-known to every Kashmiri. So, the calumny of projecting India as an intruder and occupier will not fool the people of Kashmir.

Dr Zawahiri, you have tried to misguide Muslims, quoting a contextual verse of the Holy Quran, universalising an instruction that was clearly meant for a particular group of people who were fighting the Prophet of Islam (p.b.u.h). Scholars upon scholars have opined in the last millennia and a half of Islam’s existence that these verses should be read with reference to the context in which they were revealed. You have also quoted a weak, more likely fabricated Hadith in your attempt to misguide people of Kashmir on what the likes of you call Ghazwa-e-Hind. No less reliable for you than a Saudi Salafi preacher Sheikh Mohammad Salih al-Munajjid has called all the three isnaads (chains of narration) through which this hadith about conquest of Indian sub-continent has reached us as Zaaeef (weak) or Mudallis (fabricated, based on lies). None of the major Hadith books like those by Imam Bukhari or Imam Muslim report this hadith. No serious scholar would quote such a hadith to uphold their argument.

Now that your political and theological arguments stand refuted, Dr. Zawahiri, let me educate you a little about what Islam actually stands for.

I will give you a summary of my understanding on some of the issues relevant to this discourse. Qurʾān has been created by God. It is a collection of verses that were revealed to Prophet Mohammad (pbuh) initially in Mecca, as instructions into the universal faith that has been coming to humanity since the advent of Prophet Adam (AS) on earth, through a series of prophets of equal status (Qurʾān 2:136) sent to all nations, bearing the same message. So, these initial verses that teach us peace and harmony, good neighbourliness, patience, tolerance and pluralism are the foundational and constitutive verses of Qurʾān. They constitute the fundamental message of Islam.

But the Holy Qurʾān also contains many contextual verses that were revealed as instructions from time to time for the Prophet (saw) and his companions to deal with difficult existential situations that arose as both the Mushrikeen (pagans) of Makka and Ahl-e-Kitab (People of the Book) living in Madina mostly refused to accept the message of God coming to them through the Prophet, and decided to eliminate the Prophet and his few companions. These verses are of great historical importance and tell us the near-insurmountable difficulties the Prophet had to face to establish our religion. But despite their importance they are no longer applicable to us as instructions of war, over 1400 years after those wars were fought and won by the grace of God. We are not engaged in any war now. So, Dr. Zawahiri, please stop quoting these verses of war to misguide Muslims and universalise their applicability.

We are now living in the world of modern nation-states; our international relations are guided by the charter of United Nations which has been signed by virtually the whole world including all Muslim majority states.  It is simply not possible today for any state to conquer new territories and establish its rule there as was the norm until the first half of the twentieth century. So, all talk of performing Jihad at least once a year, in this part of the world or that, should cease, even if it was indeed mandated by Qurʾān and Hadith. It is simply impractical and God does not ask us to perform impossible tasks. In any case, groups like Al-Qaeda and ISIS have absolutely no standing in Sharia to order Jihad. It’s only an Islamic state that can initiate Jihad after severing all previous ties with another state. This is an instruction of Islamic Sharia that Muslims very well understand.

There is no scriptural sanction for the call of a global Khilafat of Muslims either in Quran or Hadith. Modern pluralistic states are very much in tune with the first Islamic State evolved by Prophet Mohammad (pbuh) under the constitution provided by Meesaq-e-Madina. Muslims do not need a global Khilafat, though Muslim-majority countries can cooperate more fully in the spirit of brotherhood sanctioned by Quran and even form a commonwealth of Muslim states.

Dr Zawahiri, your slander against democracy is totally out of place and un-Islamic. Modern Democracy is a fulfilment of the Quranic exhortation of amrahumshoorabainahum. So, Muslims should try and strengthen democratic institutions in the countries where they live either as a majority community or as a religious minority.

You will do nothing better than to accept that Islam is not a totalitarian, fascist, exclusivist political ideology, but primarily a spiritual path to salvation, one of the many (Qurʾān 5:48) sent by God to humanity in different ages through different prophets, all of equal status (Qurʾān 2:136, 21:25, 21:92). God has asked us to compete with one another in performing good deeds [Qurʾān 2:148, 23:61] and that is what we should be focussed on. As Qurʾān came to confirm all previous faiths, we can only respect and accept all other religions as paths to the same divinity. The Doctrine of al-Wala wal-Bara (Love and Enmity for the sake of God), as propagated by the likes of you, Dr. Zawahiri, in this missive to Kashmiris as elsewhere, is misconceived and impractical in the present highly complex and intricately interwoven global society.

Sultan Shahin is the founder editor of a Delhi-based progressive Islamic website NewAgeIslam.com.