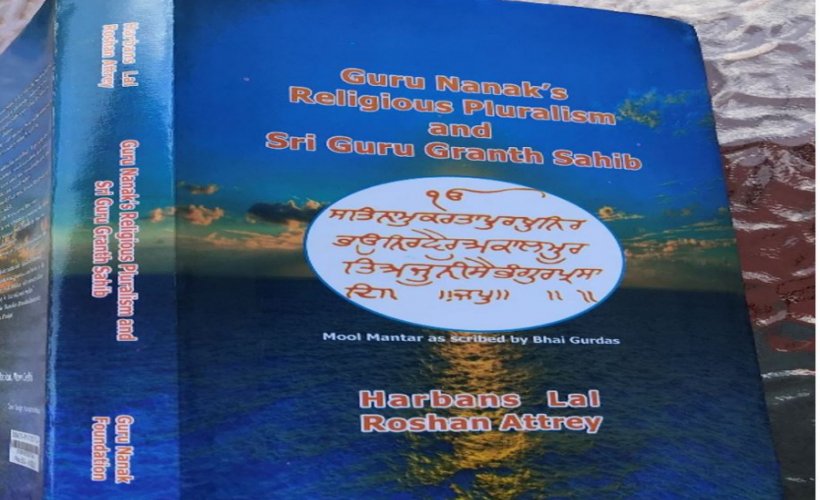 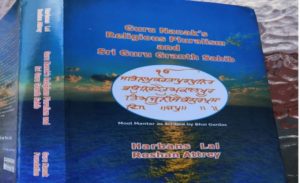 The authors have dedicated their book to Guru Nanak in celebration of his 550th birthday this year. That makes this work special, but it would have been considered a contribution to Sikh religious thought even if it were published any other time.

At the outset, I would like to highlight three things that make this book distinctive: the background of the authors and the gifts they bring to their work; the encyclopaedic nature of the topics covered; and its emphasis on pluralistic foundation of Sikh theology-something that has not received much attention in the past.

Professor Harbans Lal is well-known in the North-American Sikh community for his dedication to the cause of promoting greater understanding of Guru Nanak’s message of universal love and compassion. He has authored dozens of articles on different aspects of Sikh faith which were published in scholarly journals over the past several years. More than anything else, his life story is a mirror of his spiritual beliefs; he has not only understood gurbani at the intellectual level but has lived it on a daily basis. No wonder he has earned the name and title of “Bhai Sahib Harbans Lal Ji” that says more about his deep spiritual beliefs than his usual academic title. The co-author, Professor Roshan Attrey, comes from a slightly different social and religious background but together they make a good team. While one author has a strong science background, the other brings the knowledge of English language and literature.

The topics covered in the book make an impressive list– the evolution of Sikh faith, compilation of Sri Guru Granth Sahib, the concept of Guru, the impact of history on Sikh theology, and many others. But what makes this book really different from others is its emphasis on pluralism, diversity, and interfaith aspects of Sikh belief system. This is something of special interest to me as a former teacher of political science. My first book on political theory was titled Liberalism and Marxism1 which presented comparative analysis of two different political systems-one which was liberal, democratic, and secular with no state religion, and the other that was authoritarian, non-religious (with ideology having replaced the traditional religion), permitting no diversity of thought (those who tried to come up with a different viewpoint ended up in the prison or faced the firing squad). The end of the Cold War also saw the end of Marxist-Communist State. What we thought was a great victory for liberalism and pluralism has lately turned into a nightmare of a different sort. There are countries that showed strong commitment to secularism and to pluralistic democracy in the past, but unfortunately they have new leaders with autocratic tendencies, who have shown willingness to threaten religious minority groups the way it has never been done before.

Since the precise meaning of the word pluralism may not be clear to an ordinary reader, I want to take a moment to talk about it. A pluralistic society is one where multiple things, multiple viewpoints, multiple belief systems, can exist at the same time. More importantly, it is a society where minority religious groups can maintain their cultural and religious traditions without any fear. If we look at the history of the past 500 years, Sikhs suffered a great deal of cruelty and barbarity during the Mughal rule, which was repressively non-pluralistic regime, resulting in the martyrdom of Guru Arjun Dev and Guru Tegh Bahadur and the great harm that was done to the family of Guru Gobind Singh, and the attack on the life of Guru himself. Even these events, which were horrific on every count, did not turn Sikh religion into a religion of revenge. In all Sikh kingdoms that emerged after the fall of the Mughal empire, the rulers treated their subjects equally and fairly, and had advisers and ministers who were Hindus and Muslims. Sikhism also did not become a religion of coercive conversion. Such things do not happen in a vacuum. Ideas have consequences.

When Guru Nanak proclaimed soon after his enlightenment, “There is no Hindu, there is no Muslim. We are all children of one God” it was a message to the whole world: this new faith respects the right of all people to worship their gods as they wish but there is only one destination. God is One Formless Being. Paths might be different but they all converge at the same destination.

The authors call Guru Nanak “a genuine religious pluralist” which beautifully sums up his worldview. Here was a great prophet who lived his life like a faqir. He never demanded anything from anyone. The humility that he expressed is difficult to match. He called himself “a slave of slaves.” His most important contribution was the gift of shabad which he gave to ordinary people as a way of directly connecting with God. The further reinforcement of this idea came with the compilation of Sri Guru Granth Sahib and its transformation later into a living guru. A Sikh who believes in Guru Nanak and in the Granth as a living Guru is naturally bound by the ideals of the faith. He or she will not accept any other living person as a spiritual guru because that will lead to the division of the faith and it cannot happen. The authors rightly mention, “The Reformation movement gave rise to Protestantism and its numerous denominations. If this scenario were to materialize among Sikhs, Sikhism as we know it would disappear.” (p. 36) The Sikhism survives because most of its true followers keep their faith in gurbani and they do not aimlessly wander here and there.

The authors go at length in supporting their hypothesis of pluralism. Take for example Sri Guru Granth Sahib. They call it an “interfaith scripture” because it contains the bani of not only Sikh gurus but dozens of other saints and bhaktas who were both Hindu and Muslim and they came from diverse occupational backgrounds. If we look at the language of the Granth, it is highly diverse. It has words from Sanskrit, Prakrit, Persian, Arabic, Bengali, Marathi, and many other Indian languages. That makes it a Granth of India, not just a scripture worshipped by people belonging to one faith.

The law of diversity is universal in nature as well as in the world at large. “The law of diversity applies to religions, too. Pluralistic religions originate out of human ecology of diversity. They are best suited to survive when they keep pace with human evolution.” (pp. 50-51) Guru Arjan Dev spoke of pluralism as “many colors and forms; tiny or huge” (p.51) The Guru also used the metaphor of an orchard to describe the diversity of faith and culture. He wrote, “The world is an orchard; a variety of vegetation is growing in it. And in its midst is growing the fruit of immortality. Think, O Seeker of Truth, think in such a way that you may achieve Nirvana and become immortal. There is only one gardener who tends this orchard. He brings numerous sorts of vegetation and plants them there. He takes care of every leaf and branch. They bear fruit-none is without fruit. And there also grows the tree the gardener has planted that bears the fruit of immortality, of eternal divinity … One who receives the eternal faith of divine understanding from the teachings of the Guru says Nanak, such a blessed one alone succeeds in crossing over the ocean of Maya, i.e. this world, this life.” (p. 75)

The authors provide two quotes from Akal Ustat by Guru Gobind Singh that are really illuminating. He wrote: “All human beings are one and the same, although there is a deception of differences due to a multitude of environments and societies.” (Akal Ustat, Chhand 86.1.2.) These differences stem from national and cultural differences, from the clothes they wear, the Guru added. In the next Chhand the Guru writes, “As out of a single fire arise millions of sparks and merge back into the same fire. As out of dust arise millions of dust particles and merge back into the same dust. As out of an ocean arise millions of waves and merge back in the same ocean. So from one God merge all creations, animate and inanimate, and all return to the same Creator.” (p. 76) The beautiful words that Guru Gobind Singh used were in fact elaboration of the idea that originated with Guru Nanak Dev: “Every heart contains the same divine light. It is the light of the Divine that brightens all hearts.” (p. 76)

In light of what is stated above, Sikhism could not have evolved any differently than it actually did. The idea of inclusiveness is a powerful idea. This is the idea that makes Sikhs discover new opportunities by starting their own businesses or moving to other countries for improving their economic condition. When you belong to a religion that does not believe in boundaries, the whole world becomes boundaryless for you. Sikh contribution to the economic well being of India as a nation has always been disproportionate to their numbers in the total population. Wherever Sikhs go, they embrace local cultural values while not forgetting their own. They are civic minded, law abiding citizens who are greatly valued by the host nations.

There are challenges, of course. The state of affairs in Punjab as a state is much less encouraging today than it used to be. Younger generation has increasingly moved away from the ideals that inspired previous generations. Drug addiction has reached epic proportions, while leadership is failing at all levels. Fundamentalism or extremism that has impacted Islam as a religion since 1980s in a very big way also affected Sikh faith a few decades ago. There is an impression that it was defeated by force used by the government. The truth is that it was defeated by Sikh sangat because the ideology of extremism is fundamentally incompatible with Sikh faith. Extremism has it its roots in exclusion and the use of force to seek compliance. It is total negation of pluralistic thinking, which is acceptance of all human beings as part of God’s creation, and showing respect to other faiths and abjuring use of force against anyone for worshipping God in a different manner.

Books on religious themes are written and they are soon forgotten. But this book by Professors Lal and Attrey reminds us of a fundamental principle on which Sikh faith was based; there are things that we forget and there are times when we need to refresh our thinking. Now is such a time. There will always be challenges, but it is important for the Sikh community, as the authors suggest, to stay focused on the fundamentals, such as staying inclusive, open to change, avoiding violence in any form and shape, and staying strong as a community by helping one another. I hope the book will be read by practitioners of the faith as well as by Sikh leaders who bear responsibility for providing leadership that is positive and that comes from the heart to solve issues that have the potential to hurt our future.

Daler Aashna Deol was lecturer in Political Science at Delhi University. She is the author of A Gift of Grace: The Essence of Guru Nanak’s Spirituality (New Delhi: Niyogi Books, 2019). 1Liberalism and Marxism by Daler Deol (New Delhi: Sterling Publishers, 1976).