Home Crime Returning IS fighters may use similar tactics in India, fear officials 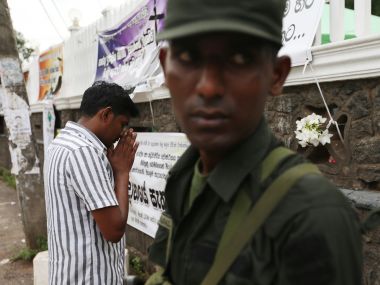 New Delhi: Easily-available chemicals, including nail-polish remover, a common disinfectant and sulfuric acid were used by Sri Lankan jihadists to manufacture the explosive used in the Easter Sunday suicide attacks which claimed over 25o lives, intelligence sources with access to forensic test results have told Firspost.

The results of the forensic tests have heightened fears among the intelligence community that Indian jihadists who fought with the Islamic State could have acquired similar skills, the sources said.

Islamic State engineers in Iraq and Syria are known to have set up industrial-scale operations to produce Triacetone Triphosphate, also known as TATP, while hundreds of cadre were given classes in manufacturing the explosive.

The National Investigation Agency (NIA) last year had said that they had recovered TATP ingredients from the home of Abdullah bin Ahmed al-Amoodi, one of the five Hyderabad residents alleged to have been preparing to bomb targets in the city. Led by preacher Mohammad Zahran Hashim, who advocated the killing of all non-Muslims and the setting up of an Islamic State in Lanka, the Sri Lanka terror cell had stockpiled chemicals at a safe-house in Wanathawilluwa, which investigators believe were meant to bomb Buddhist monuments in the city of Anuradhapura. The results of the forensic tests have heightened fears among the intelligence community that Indian jihadists who fought with the Islamic State could have acquired similar skills. Reuters

Following the seizure of the supplies in a police raid early this year, though, a fresh stockpile was put together in Sainthamaruthu, near Hashim’s home-town.

Fifteen people — three women, six children, and Hashim’s father, Mohamed Hashim, and brothers Zainee Hashim, Rilwan Hashim — were killed during a police raid in Sainthamaruthu which was carried out soon after the stockpile was discovered.

Fabrication of the explosive devices, for sources close to the investigation say, was carried out at Colossus Copper, a factory owned by suicide-bomber Inshaf Ibrahim. Ibrahim and his brother and fellow suicide-bomber, Ilham Ibrahim, were sons of Sri Lanka spice magnate Mohammad Yusuf Ibrahim.

Mohammed Mohiudeen, a former Sri Lankan army soldier now held by authorities, is believed to have played a key role in fabricating the explosive devices, along with a so-far-unnamed cell member who trained in Syria.

Australia and United Kingdom-educated aerospace engineer Abdul Lathief Jameel Mohamed, who blew himself up at the Tropical Inn Hotell in Dehiwela, is also believed to have provided technical knowledge for the bomb-making process.

Sri Lanka police have been conducting house-to-house searches searching for explosive material in the eastern part of the country, a Sri Lanka-based government source said. “Fisherfolk routinely use dynamite to stun fish,” the official said, “there are large stockpiles in almost every village along the coast.”

TATP, or C9H18O6, has been used for a string of terrorist attacks, including the 2005 suicide-bomb strikes on London’s mass transit system, and the Islamic State’s 2015 strike in Paris, and its 2016 strike on Brussels.

In order to make TATP, terrorists must mix precise quantities of acetone, oxygenated water and sulphuric, hydrochloric or nitric acid together. The process yields white crystals, which are packed together with metal shrapnel for maximum lethality, and then set off with a detonator—a thin metal tube linked to two electrical wires which can cause a spark.

“There’s some risk in the process,” an Indian military officer familiar with explosives said, “especially at the stage of mixing the acid with the other ingredients, which generates heat and can cause a dangerous fire.”

“But once you’ve learned the art,” the officer said, “it’s just half an hour’s work.” TATP is hard to detect, dogs or electronic sniffer devices usually target nitrogen-containing explosives. The possibility of TATP being prepared on-board flights gave rise to restrictions on carrying liquids in hand luggage at airports.