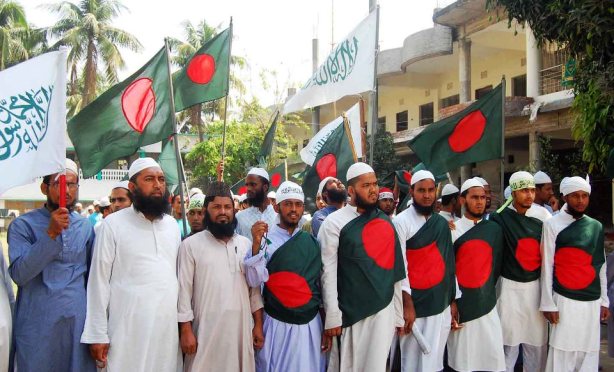 After the formation of Pakistan in 1947, the Bengalis of East Pakistan showed continuous resistance against the domination of West Pakistan. The language movements of 1949, 1950, and 1952, as well as the autonomy movement of 1950, exhibited a clear sense of separate nationhood and the desire for increased self-governance. The Bangladeshi nationalist movement was thus characterized by a distinctly Bengali ethos as well as a language-oriented conception of the nation. Indeed, soon after independence and the 1971 Liberation War, the cultural elite actively sought to remove religious symbols in an effort to merge a modern appeal with local national sentiments. However, just a few years later, the nature and narratives surrounding nationalism changed dramatically. In fact, the “core identity basis” of Bangladeshi nationalism changed from language to religion, and since that point the emphasis on Islam “has grown so strong that the fundamental Islamic force has emerged as one of the principal political actors in Bangladesh.”The prominence of Islamic fundamentalism has been highlighted in a variety of violent attacks, from the Jamaat ul-Mujihadeen Bangladesh (JMB) bombing of 2005 that targeted secular courts and judges to stabbings of journalists to the 2016 Dhaka attack that left 29 dead. Numerous Bangladeshis or people of Bangladeshi origin, including women, also flocked to Syria to join the Islamic State in order to participate in the building of a new caliphate.

What factors explain how the nature of identity formation in Bangladesh shifted so tangibly from language to religion? I argue that the rise of Islamist forces in Bangladesh is intricately tied to the political nature of military rule and the state’s perceived need to ally with Islamists to bolster their own legitimacy. The need of the state to form coalitions has been exacerbated by the government’s poor performance in social and economic development, which has triggered populist economic discontent. Thus, Islamist parties and informal forces, which had been at the fringe of the fledgling democracy in 1971, became increasingly mainstream as the state responded to perceived resistance with a legitimizing project of authoritarian control and religious co-optation. I will analyze the threads of this process in order to dissect the linkages between religious forces and economic discontent.

First, it is important to contextualize the nature of Bengali identity by exploring its pre-Partition expression. The politics of the 1940s featured “communal tensions” as a central plane of friction. Thus, Muslims in Bengal joined other Muslims in the subcontinent in the vision of Pakistan as a homeland that would offer them a renewed sense of protection. At this point, they conceptualized themselves as Muslims first and Bengalis next. Islam thus did play a key role in Bengali politics during the struggle for Independence. Interestingly, however, this shifted after the realities of Partition and experiences of oppressive governance by West Pakistan. The years after independence were a far cry from what was initially imagined: a period of flourishing and progress that would naturally follow after eliminating the cruel and exploitative colonial system. Indeed, the period from 1947 to 1971 was perceived as a continuation of colonization. Thus, for Bangladesh, the contemporary narrative of national consciousness begins only in 1971. It is imperative to note, however, that these narratives were neither uniform nor universal. In fact, Islamist elements offered competing claims to the language-based nationalist movement. During the liberation war, Jamaat-e-Islami opposed independence and instead supported the Pakistani army. Islamism at this point therefore stood in opposition to the Bangladeshi state. After independence, the tie between Jamaat-e-Islami and the Pakistani state would continue, a point I will return to.

At the point of independence, political institutions in Bangladesh were very weak. High-ranking bureaucratic and military positions previously filled by West Pakistanis were suddenly left vacant. Furthermore, the conflict of the Liberation War left society factionalized based on those who had fought in the war, those who had supported the movement from Bangladesh, and those who had been exiled in West Pakistan during the entire struggle. Prof. William Van Schendel, an authority on South Asia, especially Bangladesh, frames the state’s agenda in 1971 as being fourfold: it had to disarm freedom fights, restore infrastructure, become a global player, and most importantly deliver economic development and deal with the nationalization of industry. The political legitimacy of the nascent state, therefore, was contingent on its ability to rectify rampant poverty and inequality.

Achieving economic development proved difficult given the weak institutional capacity of the state. Sheikh Mujib Rahman and the Awami League nationalized a number of industries, massively increasing the administrative burden on an already weak government. Based on this, Milam characterizes 1973 as “the beginning of the end.” Agricultural and industrial production declined precipitously, and the cost of living for agricultural laborers increased by 150 percent as overall real incomes decreased to 87 percent of the 1970 values. Mujib faced massive popular discontent and pushback due to his inability to fulfill initial promises, causing the Awami League to resort to rigging at the polls. Additionally, Islamic right wing parties were explicitly banned, leading to widespread frustrations and strikes. This not only provided common ground between Islamist groups and popular resistance, but also drove Islamism underground and to the fringes of the political system. Mujib’s assassination with the military coup of 1975 reflected the total collapse of democratic expression of discontent in the country. Crucially, these events proved that the state lacked the capacity to garner legitimacy by delivering economic goods, and furthermore that the army had built up the capacity to take over the state completely.

Ziaur Rahman undertook direct military rule from 1975 to 1979 before restoring democracy in 1979. However, from 1975 onward, there was a significant transformation in the nature of legitimacy as Zia reached out to conservative and Islamic elements in an effort to signal a strong national identity. Presumably, Zia had learned from Mujib’s experiences, and sought to co-opt Islamic interests into his own agenda. As a result of this specific decision, the nature of nationalism changed.  The “Bengali nationalism” based around ethnicity was supplanted by a “Bangladeshi nationalism” based around Islam. Mujib’s secularist principle was rejected along with his democratic principle as national identity took a new turn. This pivot was accompanied by a shift in economic policy as well. Zia’s new program was characterized by non-governmental agencies implementing infrastructure programs and social development programs with tacit government approval. For the next few years, the military regime aimed to orient the state toward capitalist development, taking a number of policy measures such as legalizing black money, denationalizing the state-owned enterprises, withdrawing restrictions on private foreign investment, and granting credit to private entrepreneurs. Thus, the clenching of the authoritarian fist was directly associated with the state receding from its developmental role and pushing for more indirect capitalist policies.