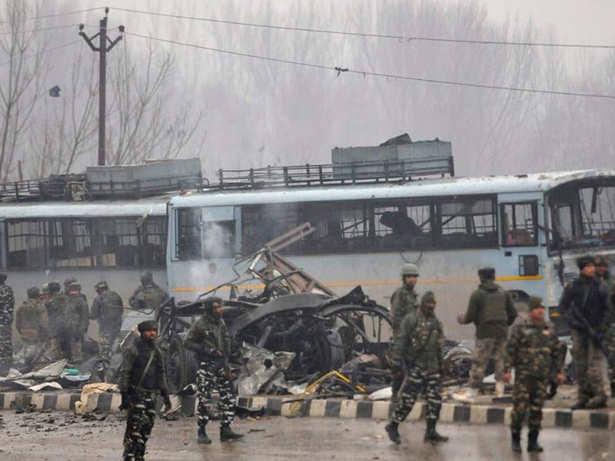 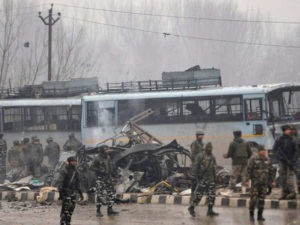 On Thursday, Pakistan-based terror outfit Jaish-e-Mohammed orchestrated the dastardly attack in Jammu and Kashmir’s Pulwama in which over 40 Central Reserve Police Force (CRPF) personnel were killed and many others critically injured. This is known to be the worst and the most heart-wrenching attack on the security personnel in the state. The Jaish, has claimed responsibility for the attack, targeted a convoy with a car bomb, as the reports suggest.

Not only India, the entire world is aghast at this mindless violence and wanton killing of Indian soldiers in one of the worst strikes on the CRPF convoy in Jammu and Kashmir in a decade. Like every Pakistani jihadist terror outfit like Jaish-e-Mohammed which claimed the responsibility for the attack, the motive behind this nefarious strike is self-evident. The terror goons who butcher even innocent Muslim children, women and elderly people in their own ‘Islamic’ country declaring them bad-mazhab (imperfect in faith) take temerity to attack the Indian jawans with more impunity. The terrorists of Jaish-e-Mohammed in particular and every other violent jihadist outfit in Pakistan wreaks violence in India to earn the ‘virtues of jihad’ (fazail-e-jihad) and ‘istishhad’(Islamic martyrdom)which is perpetually glorified in the jihadist mouthpieces. But regrettably, they are taken merely as an ordinary propaganda without the seriousness that it requires.  Shouldn’t India take such jihadist writings and propaganda seriously enough? Given the fact that Azhar is backed by the Pakistani State, India cannot be complacent.

Recently, JeM’s weekly online Urdumagazine Haftroza Al-Qalam has published a series of articles, reports and analyses about the significance of Islamic battleagainst India or what is popularly known as Ghazwat-ul-Hind in the subcontinent. Let’s just take a look at the headlines of these three articles penned by the JeM clerics in the last week of February, 2019:

(Jihad in Kashmir is a proof for harbouring the honour of Islamic jurisprudence: Maulana Talha al-Saif)

(Indian will be forced to hold talks with the mujahidin in Kashmir sooner or later, writes Mufti Abdur Rauf Asghar)

The main thrust of all the above-mentioned articles in al-Qalam is that jihad in Islam is not the state’s responsibility as many ulema in India and Pakistan try to buttress in their counter-terror fatwas and sermons. Rather it is farz-e-ain (an Islamic obligation on every individual) which sometimes turn into a greater source of virtues than even Namaaz and Roza (prayer and fasting). Does it remind us of something crucial? Much before the Jaish-e-Muhammad came into existence in Pakistan, India’s pan-Islamist thinker and scholar, Maulana Abul A’ala Maududi challenged the consensus of the traditional Indan ulema about the objective, essence and hierarchy of the four fundamental elements of Islamic worship—Namaz or Salaah (prayer), Roza (fasting), Hajj (pilgrimage) and Zakat (charity). All these were performed in the Indian subcontinent with an intent to seek blessings, pleasure and closeness of Allah. But for the first time at least in the Indian setting, Maulana Maududi declared all of them as “means and tools to prepare for Jihad”. He wrote in his book “Fundamentals of Islam” (Page: 250):

“Salaat (Namaz) is a training exercise for Jihad. Zakat (Islamic charity) is a military fund for Jihad. Fasting is aimed to train people like soldiers who have to stay without food at times for long periods during the Jihad. Hajj is a huge conference in nature for plotting larger scale military operations. Thus, Salaah, Fasting, Zakat, and Hajj are actually meant for this very preparation and training”

So, what the terror leader Maulana Masood Azhar is trying to propagate through his mouthpieces and sermons has already been stated, more clearly and categorically, in so many words written by Maududi. And each book and booklet is not only freely available at the Jamat-e-Islami Hind’s offices and publications but is also part of the curriculum in a few Islamic institutions in India including Jamia-tul-Falah of Balarya Ganj in Azamgarh (UP).

It cannot be denied the mainstream ulema in India have been vehemently opposed to the acts of violence including the Pakistani terror attacks juxtaposed with jihad and istishhad. Barelvi cleric Mufti Mohammed Salim Noori went to the extent of declaring the terrorists like Hafiz Saeed beyond the pale of Islam. But isn’t it an escapist approach towards counter-terrorism?

In fact, these condemnations have proved ineffective in the series of indiscriminate jihadist bloodshed in Jammu and Kashmir. The more strongly they condemn, the more deadly attacks the Pakistani Jihadists launch on Kashmir. More terribly, Pakistani Jihadists’ war cry of Ghazwa-e-Hind (Islamist expedition against India) which is, of course, based on six hadith reports, has greater appeal to the misguided youths than the repeated cliché of ‘Islam means peace’ by the Indian ulema. They are not prepared to address the real issue which leaves them with a deeper predicament.

For instance, Masood Azhar argues that the second caliph of Islam Umar ibn Khattab, who ruled from 634 to 644 CE, had issued a binding order to all his governors to ensure that “every Muslim will teach their children swimming, archery and horseback riding” in order to prepare for jihad. Similarly, Al-Qalam published a short piece of writing highlighting the theological place of jihad on oceans, quoting this hadith report “Some people from my ummah rode on the oceans as a king sits on a throne”.Will the ulema of Deoband or Bareilly have the temerity to rebut the jihadist propaganda which quotes this hadith to achieve its nefarious ends?

Clearly, Indian ulemamust not overlook the radical Islamist clergy of Pakistan breeding for the terrorists taking arms to strike India. While it is an obnoxious Islamist design to ‘eliminate all infidels from the Indian sub-continent’, as an editorial in al-Qalam avers, one cannot reject its implication as part of the proxy war that Pakistan has launched through the jihadist outfits.

Prime Minister Narendra Modi has pledged that those behind this despicable attack will not go unpunished’ But what about the theological terror mentors who provide the doctrinal basis for the militants turning terrorists and going haywire? What is the state administration planning to do about it? Should they not be taken into account periodically, to review the situation and make course corrections as required?