Home Crime Unity in tragedy: A Prayer Meet for the lives lost In Pulwama 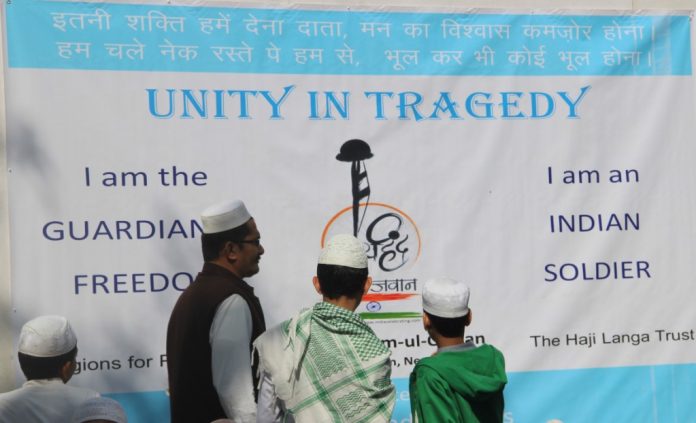 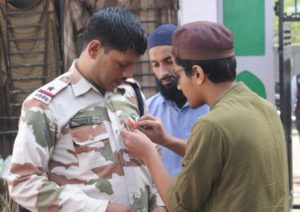 A prayer meeting was held for Pulwama Martyrs after the Jumah prayers  at the Masjid Haji Langa, Gurgaon on 22nd February 2019. As the worshippers entered the mosque the children of the Madarsa Taleem ul Qur’an greeted them with salutations of Salaam along with Jai Hind and pinned them with badges of mini tricolour flags which the children had  made a day before.

In the press release team of the Madarsa said that the prayer meeting was the idea of a law student Shameer and his friends who had participated in a similar peace prayer meet ‘Religions for Peace’ organised by an international youth organization. The Imam of the mosque and Head of the Haji Langa Trust , Maulana Qasim took up the idea and in the sermon at the Friday prayers spoke to the gathering about patriotism. He said “we are Indians and we should come together to work for the peace and harmony for the sake of maintaining peace and Harmony throughout  the nation” .

Major Javed Jafri (Retd.) in his address stressed that we all must support such initiatives, where different groups are coming forward to promote the message of peace, brotherhood and unity.

After the Juma namaz , the worshippers and the students of the Madarsa along with guests from other faiths including a few retired defense personnel made Ishtemai Dua ( Collective Supplication) for peace in the country and paid respect to the martyred soldiers of Pulwama.

Shameer and his friends Abhilash, Bilal, Ritesh, Farheen, Zaheer, Ravi and Aamena among others urged the youth across the country to organize similar inter faith prayers to reiterate the profound belief of Unity in Diversity.