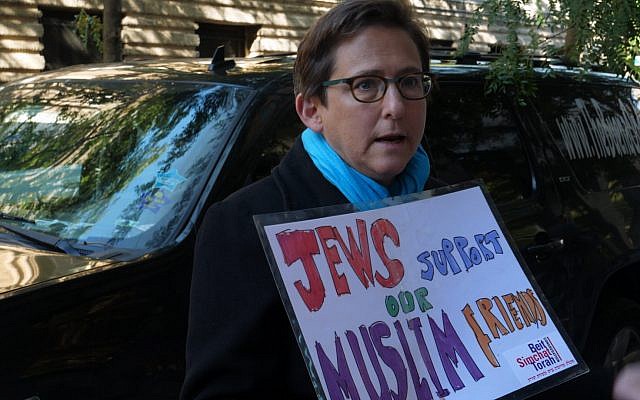 For the last two-and-a-half years, congregants and clergy from Rabbi Sharon Kleinbaum’s synagogue, Congregation Beit Simchat Torah, have shown up every Friday in front of the Islamic Center at NYU in Manhattan. With warm smiles and holding handwritten signs sporting “Shalom/Salaam,” Kleinbaum and friends greet Muslim worshipers arriving for the afternoon Jummah prayers.

“It’s about the power of being an ally,” Kleinbaum told The Times of Israel with regard to the interfaith work the progressive CBST synagogue has undertaken with the neighboring mosque.

This alliance is only one example of Jewish-Muslim solidarity shown in Adam Zucker‘s new documentary film, “American Muslim,” premiering this week at the San Francisco Jewish Film Festival. The film focuses on the experiences of American Muslims in the Trump era. Zucker’s previous film, “The Return,” was about young Poles exploring their Jewish roots.

While the interfaith encounter is not the central aspect of “American Muslim,” the documentary challenges Americans of all faiths — or no faith — to consider how they are standing up (or not) for those targeted by increasing xenophobia and racism, which has been linked by some to the current administration’s rhetoric and immigration policies. 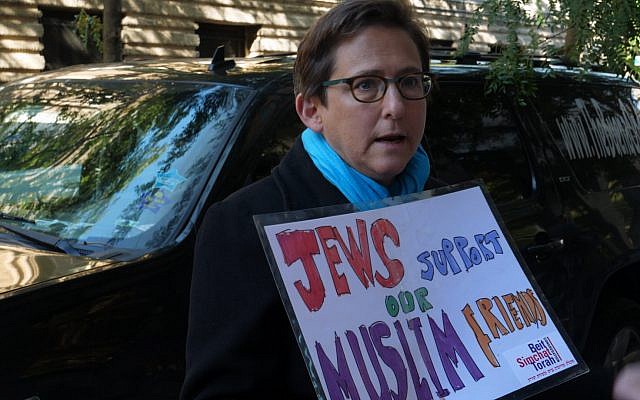 Director Zucker said his own way of responding to his disappointment at Trump’s election was to pick up his camera and make a film that would introduce viewers to Muslims, about whom the president had made numerous controversial statements during his campaign.

For this new project, Zucker set about profiling a handful of American-Muslim New Yorkers of different backgrounds, genders and ages. Finding subjects for the film wasn’t so easy, given that the 61-year-old Jew didn’t know any American Muslims.

“New York has a very large Muslim population, and I am a lifelong New Yorker, but I hadn’t really met any Muslims,” Zucker admitted.

According to Zucker, the fact that he is Jewish did not at all bother the people he interviewed and filmed. 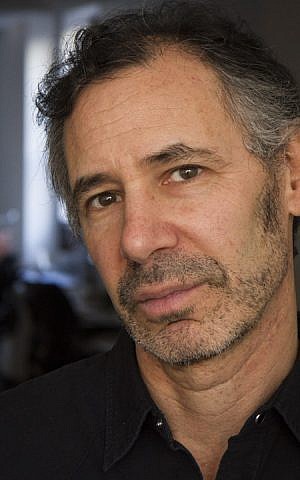 “Virtually every American Muslim I spoke to was glad I was there documenting their story. People felt a need to open up, and working on this film opened up for me an unfamiliar world that profoundly moved me,” Zucker said.

Zucker found the framework for his film on January 27, 2017, when Trump signed a controversial executive order effectively targeting Muslim migrants. The order banned foreign nationals from seven predominantly Muslim countries from visiting the US for 90 days, suspended entry of all Syrian refugees indefinitely, and prohibited any other refugees from coming into the country for 120 days.

Zucker documented protests against the ban and tracked the trajectory of legal challenges to it. The film begins with the signing of the original executive order and ends with the US Supreme Court’s June 26, 2018, decision to uphold a revised version of the ban targeting most or all nationals from Iran, Libya, North Korea, Somalia, Syria, and Yemen, and government officials from Venezuela and their families. 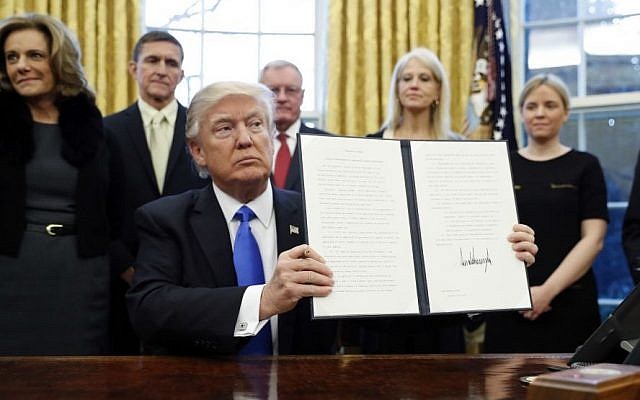 President Donald Trump holds up a signed Executive Order in the Oval Office of the White House, January 28, 2017 in Washington. (AP Photo/Alex Brandon)

“This is our country. Yet here I am, a US citizen, and I can’t even bring my mother to America,” lamented a Yemeni-American cell phone store owner whose elderly parent has decided to return to war-torn Yemen after languishing in Jordan for several years waiting for permission to enter the US.

“Because of this ban, there are life moments gone forever,” he said.

The refugee ban is still being litigated in the United States Court of Appeals for the Ninth Circuit. A preliminary injunction was issued to block most of the ban, and the court is now deciding whether the government complied with it.

According to Melanie Nezer, senior vice president for public affairs at the refugee assistance agency HIAS, which sued the Trump administration over the executive order, it is unlikely that anything will change as long as Trump occupies the Oval Office.

“Keeping families apart is the hallmark of this administration’s policies,” Nezer said.

It was important to Zucker to reflect the diversity of the American Muslim community, and to dispel misconceptions. More than once, subjects of the film bemoan the fact that many Americans incorrectly think that all Muslims are Arabs, and that all Arabs are Muslims. In fact, most Arabs in the US are Christian. 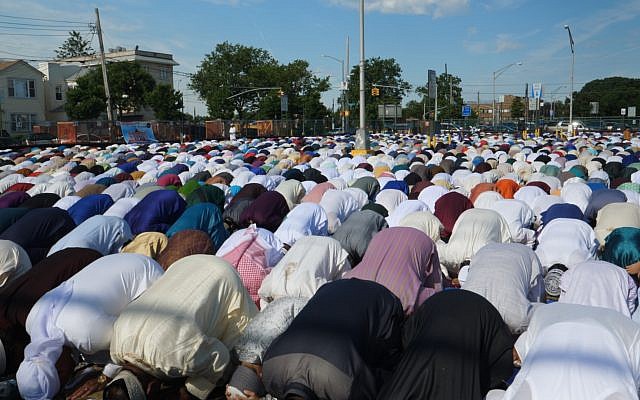 Although there are large Muslim communities in Brooklyn and Queens (as well as in other parts of the US), Muslims make up only about 1% of the US population. According to a 2017 Pew Research Center study, “There are 3.35 million Muslims of all ages living in the U.S. – up from about 2.75 million in 2011 and 2.35 million in 2007.”

The Pew report states that three-quarters of American Muslims are either first or second generation, and 82% of Muslims living in America are citizens either by birth or naturalization. Of Muslims living in America, 42% were born in the US, with the remainder having immigrated from all over the world, with no single country accounting for more than 15% of foreign-born US Muslims.

To his credit, Zucker did not turn “American Muslim” into a primer on Islam. Viewers will not come away more knowledgeable about the Quran or the life of the Prophet Muhammad. Instead, they will get a better idea of what it means to be both a proud American and a devout Muslim. 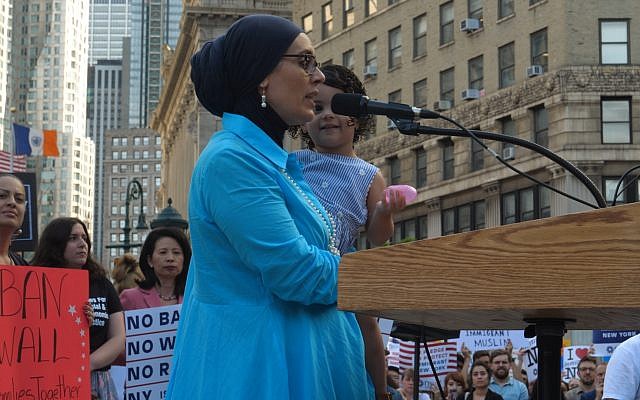 Dr. Debbie Almontaser holds her granddaughter as she speaks at rally in New York. (Adam Zucker)

The film introduces audiences to Dr. Debbie Almontaser, a veteran Yemenite-American educator and activist, and a longtime partner to Kleinbaum in interfaith efforts. With war raging in Yemen and virtually every Yemeni-American family affected, Almontaser has taken a leading role in fighting the Muslim ban by organizing her community and speaking at protests.

Another community activist, Aber Kawas, a young Palestinian-American woman in Bay Ridge, Brooklyn, also leads demonstrations against the ban, and campaigns for a Palestinian-American priest running for local government. With her undocumented father having been detained for three years following 9/11 and then deported to Jordan, Kawas has personally experienced family separation. In the film she emphasizes that unlike after 9/11 when American Muslims largely stayed under the radar, this time they are speaking up and fighting back. 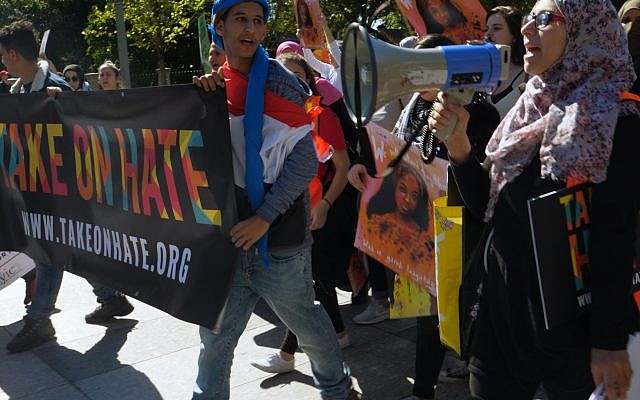 Another featured personality is Mohamed Bahi, a strapping and charismatic young Algerian-American who lives in Sunset Park, Brooklyn. Married and the father of a toddler and baby, Bahi founded Muslims Giving Back, an organization that runs a variety of charity and social programs for residents of the local community — Muslims and non-Muslims alike.

Among his programs is Project Transform, which significantly impacts the lives of one selected immigrant family every month. We see Bahi and a team of helpers — including his outspoken Egyptian-American wife, who dons a baseball cap over her hijab — do an apartment makeover for a Syrian refugee family. 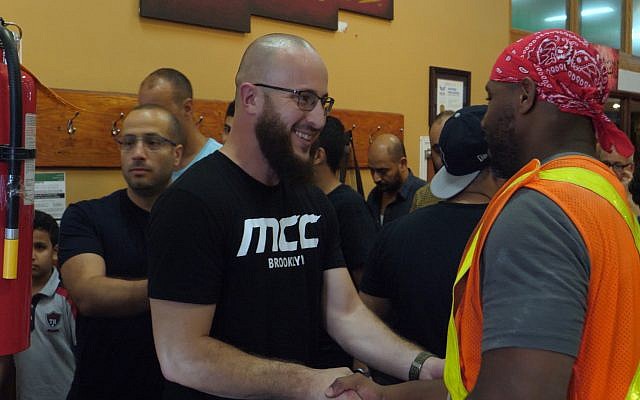 The film often emphasizes that unlike post-9/11, American Muslims can now rely on a network of partnerships with interfaith, pro-immigration, and social justice groups to fight the Muslim Ban.

Zucker noted that the support is mutual. After the October 27, 2018 massacre at the Tree of Life synagogue in Pittsburgh, Muslims he met while making the film reached out to him. Kleinbaum said the first call she got after the shocking crime was from Almontaser.