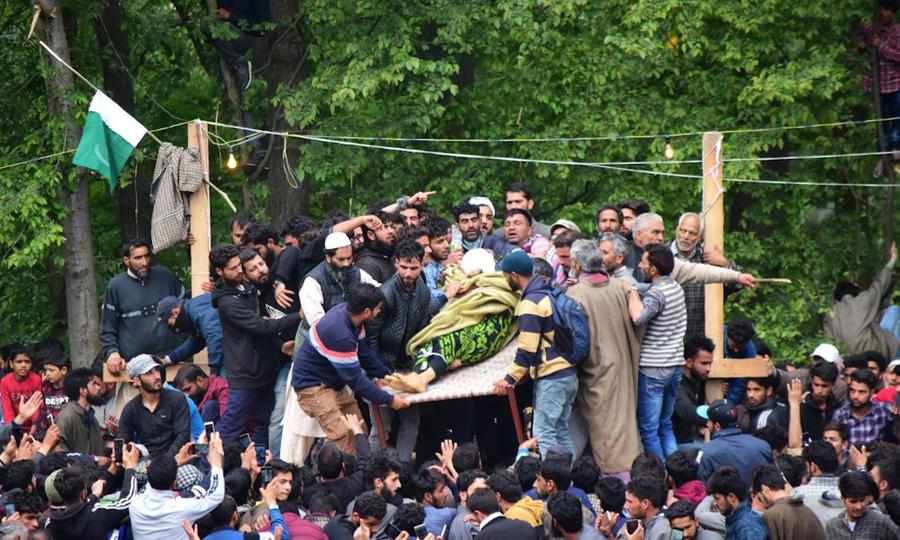 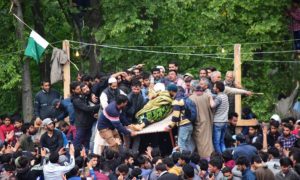 Multiple Wahhabi-Salafi groups operating in Afghanistan and Pakistan backed by Saudi Arabia, including in Nuristan and Kunar provinces of Afghanistan, and Ahrarul Islam (another splinter group of TTP) pledged support to ISIS. The Islamic Movement of Uzbekistan is also aligned with ISIS. In addition, the East Turkistan Islamic Movement (ETIM) also discounts national boundaries and wants to establish an “Islamic world.”

During the weekend, Amaq News Agency, the mouthpiece of the terrorist group Islamic State of Iraq and Syria (ISIS), announced it had established “Wilayah of Hind” – a “province” of its own – in the Kashmir Valley.

The announcement also claimed that ISIS had inflicted casualties on Indian soldiers in Amshipora, a town in Shopian district of the state of Jammu and Kashmir (J&K). This came after a militant who had pledged allegiance to ISIS was killed in a clash with Indian security forces.

The loss of territory by ISIS in Iraq and Syria led to hundreds of its cadres moving elsewhere – some on their own and others orchestrated by the nations that continue to support and arm them. ISIS claimed responsibility for the recent Easter Sunday bombings in Sri Lanka. But the announcement of “Wilayah of Hind” was something that was waiting to happen, with India’s lackadaisical handling of the ISIS issue, particularly in J&K, despite ominous signs that have been present for years.

India’s National Investigation Agency (NIA) reported in 2014 the recruitment of more than 300 Indian youths by Pakistan-based Tehreek-e-Taliban (TTP), which had joined hands with ISIS. Jamaat-e-Ahrar was the latest breakaway group of TTP proclaiming allegiance to the ISIS. However, much earlier, the Syrian ambassador to India had stated that some 5,000 Pakistan Taliban had been fighting alongside ISIS in Syria and Iraq for several months.

In 2014, ISIS distributed pamphlets in Peshawar, Pakistan, and border areas of Afghanistan propagating the Islamic State of Khorasan Province (IS-KP). Multiple Wahhabi-Salafi groups operating in Afghanistan and Pakistan backed by Saudi Arabia, including in Nuristan and Kunar provinces of Afghanistan, and Ahrarul Islam (another splinter group of TTP) pledged support to ISIS. The Islamic Movement of Uzbekistan is also aligned with ISIS. In addition, the East Turkistan Islamic Movement (ETIM) also discounts national boundaries and wants to establish an “Islamic world.”

With respect to IS-KP, the US intelligence assessment under former president Barack Obama’s administration was that these were disgruntled elements of the Afghan Taliban and Pakistan Taliban coming together. But it is believed that IS-KP (of about a brigade-level strength) had help from Pakistan’s Inter-Services Intelligence (ISI) in the Peshawar area, which was then pushed west into Afghanistan’s Nangarhar province. Afghans at times refer to this IS-KP brigade as the “ISI brigade.”

In 2014, the UK’s Channel 4 reported that an Indian, Mehdi Masroor Biswas, was behind the biggest “ISIS Twitter handle” known as “@ShamiWitness.” He operated for several years in India and helped in the recruitment of more cadres. Biswas was apprehended after Indian investigators found him working for a food company in Bengaluru, India.

It has also been reported that ISIS flags have been appearing in Kashmir for the last couple of years. The first recognition of ISIS operating in Kashmir came with the group claiming responsibility for attacking a police party in the Zakura area of Srinagar on November 17, 2017, killing a sub-inspector and injuring a special police officer.

ISIS also claimed responsibility for killing a policeman guarding the residence of Hurriyat leader Fazal Haq Qureshi in Srinagar on February 25, 2018. On June 22 last year, Dawood Ahmad Salafi, chief of Islamic State of J&K (IS-JK), a known ISIS affiliate, was gunned down in the Anantnag area of the Kashmir Valley. The next day, security forces killed another four IS-JK militants, bringing the tally to eight.

After the Sri Lanka bombings on Easter Sunday, ISIS issued a threat to India and Bangladesh and appointed Abu Muhammed al-Bengali as its new chief in Bangladesh. ISIS sympathizers who run several channels using Telegram, an encrypted messaging service, on April 25 circulated a poster in Bengali saying “Coming soon,” with the logo of a group called al-Mursalat.

After announcing a “province” in Kashmir, ISIS may also attempt to increase its presence in other Indian states such as West Bengal or Kerala. A number of young men and women from Kerala had already been identified as joining the IS-KP a few years ago. Some are believed also to have traveled to Syria.

There was no official reaction from Indian authorities to the ISIS claim of establishing “Wilayah of Hind” in Kashmir. Observers point to a deteriorating situation in the state over the past five years, particularly during the coalition government run by the Peoples Democratic Party and Bharatiya Janata Party. That period witnessed unprecedented violence, with casualty figures of security forces rising by 93% compared with figures for the years between 2003 and 2014. Stone-throwing crowds surged.

Successive Indian governments have lacked a cohesive policy for tackling the insurgency in Kashmir. Even the education system in the state has not been fully integrated with the rest of India.

Pakistan-based terrorist organizations like Lashkar-e-Taiba and Jaish-e-Mohammed have succeeded in radicalizing Kashmiri youth. This was a major factor that led to the designation of those organizations as international terror groups by the United Nations Security Council. Indian intelligence and the CIA have linked those organizations to ISIS, in particular to IS-KP and the ISI.