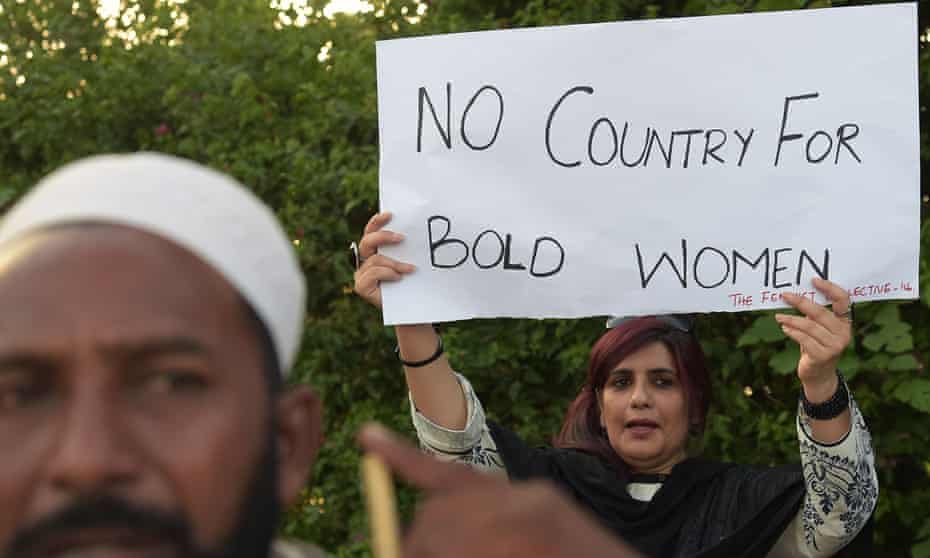 The killer was unrepentant.

“I killed my sister because she brought [a] bad name for the family,” he told neighbours in the Kachi district of Balochistan, Pakistan.

“I killed her and her lover for family honour. I want it to be a lesson for all girls in the town.”

Locals believe other members of the man’s family may have been involved but, a fortnight after the bodies were found , no arrests have been made, although police are aware of the allegations.

On Tuesday, the Dawn newspaper reported that a woman from Lahore had been shot dead, allegedly by her son, brother and brother-in-law, after leaving her husband and taking refuge at the house of a friend.

Police said they found the body of Arooj Shahzad a day after she approached officers over fears that her family would come after her. Chutala police have registered a case against five suspects.

Shahzad’s killing was the 12th in a fortnight linked to “honour” recorded by the Pakistan authorities.

Every week in Pakistan brings fresh news of wives strangled, daughters shot or sisters drowned for a perceived slight to family “honour”. Sometimes a single person is responsible; more often, a group of male family members is involved. The vast majority of the killers go unpunished.

Statistics from the Human Rights Commission of Pakistan suggest there were 1,276 such murders over a two-year period beginning in February 2014, 400 of which were officially registered as crimes by the police.

Human rights campaigners say more than 1,500 killings occurred between 2016 and 2018, a figure anecdotally confirmed by Asad Butt, vice chair of the Human Rights Commission of Pakistan.

Pakistan’s parliament unanimously passed legislation against killings linked to the concept of “honour”, or “izzat”, following the murder of Qandeel Baloch in 2016. The death of the social media celebrity, who was killed by her brother in the name of “honour”, sparked international outrage.

The bill authorised life imprisonment for convicted murderers. Previously, killers could win – or buy – freedom if the victim’s relatives forgave them.

But killings of people who “violate certain patriarchal codes” have continued at the same rate, said Nida Kirmani, associate professor of sociology at Lahore University. “Honour crimes are committed as a way of policing or disciplining women, girls, men and boys who are seen to be violating these rules,” Kirmani explained.

Just as matters related to family are settled in blood, so too those who try to alert the authorities risk their lives. Afzal Kohistani, a whistleblower who called for the punishment of tthose involved in the Kohsitan scandal, in which five women died as well as Kohistani’s three brothers, was murdered in March this year.

In Pakistan, the state system runs in parallel with a more regressive societal system that reinforces patriarchy and disempowers women.

“I don’t blame people, rather I blame government for not empowering women and supporting patriarchy,” said a government official speaking on condition of anonymity. “It is government that is run by tribal lords and elites. And local police or administration refrain from making arrests in “honour” related cases. This happens in most rural areas of Pakistan.”

In August 2008, after three girls were buried alive in Balochistan province for wishing to marry of their own will, local media reported that a minister and other influential people were involved in the crime. When the incident was discussed in Pakistan’s senate, two senators at that time, Sardar Israrullah Zehri and Taj Jamali, defended the act and called it “tribal custom”.

Qadir Naseeb is one of the many journalists who now rarely cover “honour” killing stories. “I have been threatened by influential people and tribal heads while reporting. No matter how much one highlights this menace, government rarely arrest and punish the culprits. The disturbing part is that all the killers I interviewed never felt guilty.”

Maliha Saeed has been a woman’s rights advocate for decades. She says the government needs to do a lot more to curb honour killing. “It has to empower women economically and socially. Government should instruct the Pakistan Electronic Media Regulatory Authority to spread the message against honour killings through news channels, dramas. It should discourage violence against women.”

However, the Balochistan government has yet to arrest the culprits involved in two separate cases of “honour” killing that took place in Kachi district last week.

“Unless there is an egalitarian state which empowers women, honour killings will continue,” said Mir Mohammad Ali Talpur, a columnist with the Balochistan Times.

… we have a small favour to ask. More people are reading and supporting our independent, investigative reporting than ever before. And unlike many news organisations, we have chosen an approach that allows us to keep our journalism accessible to all, regardless of where they live or what they can afford.

The Guardian is editorially independent, meaning we set our own agenda. Our journalism is free from commercial bias and not influenced by billionaire owners, politicians or shareholders. No one edits our editor. No one steers our opinion. This is important as it enables us to give a voice to those less heard, challenge the powerful and hold them to account. It’s what makes us different to so many others in the media, at a time when factual, honest reporting is critical.

Every contribution we receive from readers like you, big or small, goes directly into funding our journalism. This support enables us to keep working as we do – but we must maintain and build on it for every year to come.