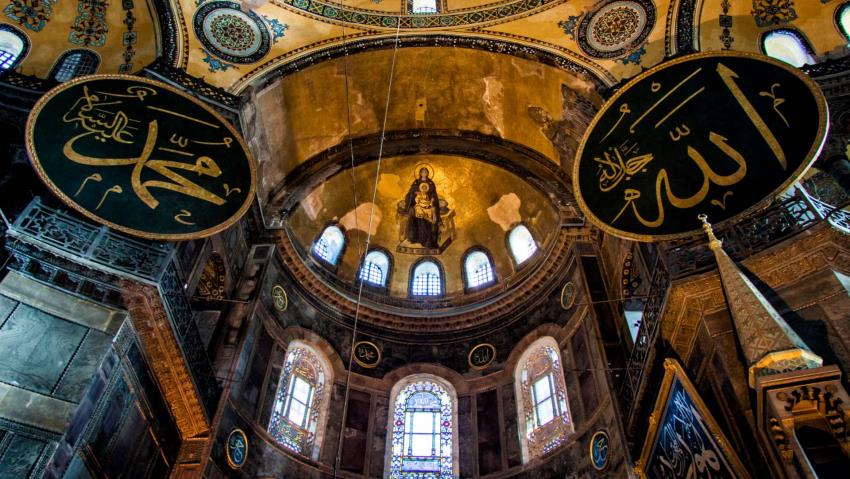 The Syrian regime has said it will build a miniature replica of Istanbul’s Hagia Sophia in response to Turkey’s conversion of the UNESCO World Heritage site into a mosque.
Russia, a major ally of Syria’s Bashar al-Assad, will assist in building the mini Hagia Sophia in Hama to show the importance of “peaceful dialogue” between faiths, Al-Rai Al-Youm reported.

Last week, Turkey held the first Muslim Friday prayers in the Hagia Sophia for more than 80 years. Ankara earlier this month reverted the building’s museum status back into a mosque, prompted criticism from Christian leaders, neighbouring Greece and Russia.

Built as a cathedral under the Christian Byzantine Empire, the Hagia Sophia was first converted into a mosque after the Ottoman conquest of Istanbul in 1453. It was changed into a museum under the leadership of Mustafa Kemal Ataturk, the founder of the modern Turkish republic.

Syria’s Hagia Sophia replica will be built in Al-Suqaylabiyah, a Greek Orthodox Christian-majority city in the central Syrian province of Hama.

A Russian team based in the Hmeimim military base in Latakia is currently working on plans for the replica, according to Russian lawmaker Vitaly Milonov.

Syria will be an excellent location for the faithful Hagia Sophia replica because “unlike Turkey, it is a country that clearly shows the possibility of peaceful and positive interfaith dialogue”, Milonov said.

The project was initiated by Nabeul al-Abdullah, the leader of a pro-regime militia in Al-Suqaylabiyah. Abdullah obtained the approval of Nicolas Baalbaki, the metropolitan bishop of the Greek Orthodox church in Hama, and then presented the plans to the Russian military, Al-Modon reported.

The militia leader donated a piece of land on which the replica will be built.

Moscow’s support for the initiative is part of a bid to justify its intervention in Syria by highlighting links between the Christian population and Russia, opposition activists told Al-Modon.

For his part, Abdullah hopes to strengthen his ties with Russia in order to maintain influence in the event of the Assad regime’s collapse, the opposition activists said.