Home CRITICLES Discussions between Modi and Trump seemed more than satisfactory, given the outcome 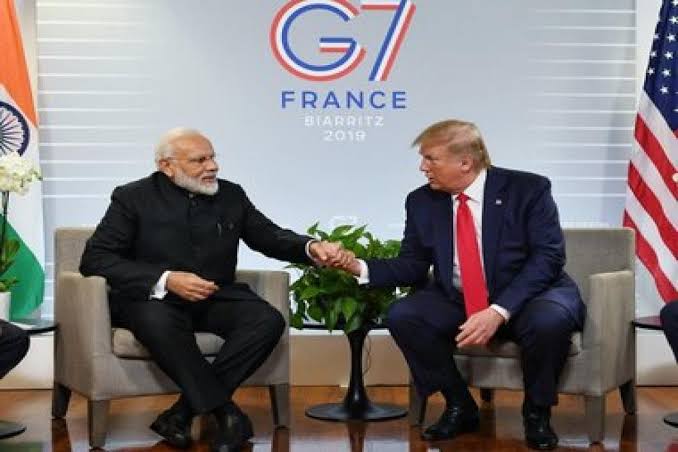 It seems that brick after brick is falling into place for Prime Minister Narendra Modi in his effort to build a wall of support for India. After a triumphant visit to Bahrain, where he received the rather impressively titled ‘King Hamad Order of the Renaissance’, he flew to Biarritz, the playground of the rich and famous as a “special partner” at the G7 summit, to meet and greet world leaders.

The contrast couldn’t be greater.

At about the same time, several hundred miles away, Pakistan’s prime minister was making a somewhat incoherent address to the nation on Kashmir. Even his best friends would not call that his brightest moment, particularly since he is an otherwise eloquent and measured speaker. That speech was peppered yet again, with allusions to fascists, Nazis and the like, and a promise to stand by Kashmir as its special ambassador. More ominously, there were more references to ‘false flag operations’ — a term that Islamabad has recently adopted, apparently to imply that yet another Pulwama will take place, will be ‘blamed’ on Pakistan, and that war will inevitably erupt between the ‘nuclear neighbours’.

‘False flag ops’ is a term more often than not, used by Pakistan’s westward allies. Clearly some of those are egging him on from the sidelines as he waxes on about the threat of nuclear war at every opportunity.

None of this may even have registered at the G7 meeting, where world leaders from Canada, France, Germany, Japan, and the United States among others, were more concerned with the raging fires of the Brazilian rain forest, differences on trade issues, US policy on China, and European resentment at President Donald Trump’s Iranian policy. Kashmir is a side issue when compared to these stirring events that impact adversely on European pockets and GDP. The fact that the Indian prime minister was there at all came probably from a nicely-turned diplomatic curve, negotiating the Rafale deal with one hand, even while bargaining for a quiet conversation with the US president well before the UN General Assembly meeting in September.

For form’s sake, Modi also addressed issues of biodiversity, climate change and an issue of more immediate interest: Digital transformation. But the focus was clear. The situation had to be explained to the President of the United States, with the I’s dotted and T’s crossed.

But clearly that’s what they did.  Discussions between the two sides — with Modi accompanied by formidable National Security Advisor Ajit Doval and Foreign Secretary Vijay Gokhale — seemed to have been more than satisfactory, given the outcome. Trump seemed to be happy with India’s assurances on Kashmir, saying that it seemed Delhi had the issue well in hand. Clearly expecting the question on mediation at the joint press conference, Modi dealt very well with it, stating clearly that India and Pakistan had a lot of bilateral issues to discuss, and that Delhi would not ‘trouble’ anyone for mediation. The ‘Thanks, but no thanks’ was left hanging in the air.

This is no mean feat, since less than a week ago, the US side — particularly the State Department — was virtually backed against the wall by a hail of Pakistani propaganda and threats, including those of nuclear war, from no less a person than its prime minister. Accompanying this was a surprisingly vicious onslaught from the US media, the stridency of which has rarely been seen earlier. While everyone in the US bureaucracy is now very well aware of Pakistan’s tactics in shouting itself hoarse to get world attention, as a bureaucracy, it is forced into fielding uncomfortable questions from the existing pro-Pakistan lobby in Congress.

Thus, the stress on human rights in Kashmir, and release of political ‘prisoners’ was expected, and will hopefully not be trumpeted by an unruly Indian media. Few in India care to consider that the US system is accountable at every level, and that there is a high degree of Congressional oversight into the government’s positions on various issues, Kashmir included. On the face of it therefore, the meeting in France was a definite win for the Indian government against considerable odds, but only for the moment.

In the face of continuing Pakistan hype, the crux of the question is whether an energetic home minister can make sure that the situation in the Valley is normalised as soon as possible, even while preventing dangerously troublesome elements  from instigating violence on the streets. The excellent ‘perception management’ by the Pakistanis — which is truly in the top category — has created a whole machinery that is responsible for rumour-mongering, spreading fake news via social media and mobilising crowds. In some ways, terrorists are easier to handle.

It’s an almost impossible task — opening up the Valley and controlling it at the same time. Meanwhile, it seems that there is some sort of a conversation going on with Islamabad. Trump let the cat out of the bag at the presser when he stated that India was talking to Pakistan, and that the two sides would sort matters out. Not that this is a surprise.

Nations talk to each other all the time, but even more so when relations turn ugly.

In the meantime, Pakistan has talked itself into a corner with the establishment falling prey to a ‘do something’ lobby that is probably unsettled by unprecedented events. After all, they’re more accustomed to a defensive and somewhat hesitant India rather than one nippy on its feet. Moreover, the (barely) ruling party is getting flak from the Opposition, all of whom want nothing less than the Pakistan Army to declare jihad on India, and march in with trumpets blaring. Former bureaucrats have been heard to say that jihad by the Kashmiris is permitted under international law, while Urdu papers like Ummat are warning that India will again break Pakistan up, if Islamabad does nothing.

Jang is equally strident, calling for an international force to prevent ‘genocide’ in Kashmir. And the Pakistani prime ,inister is forced to deal with this shrill call to action, in the best possible way. Being a ‘selected’ prime minister as his detractors allege, doesn’t help. A Nawaz Sharif would have faced such demands calmly, and not done very much. Imran responds with bluster. That’s his undoing.

Given the verbal diarrhoea emanating from Pakistan, Delhi can’t possibly agree to a ‘dialogue’, even if it wanted to. Consider that in any such overture, Pakistan will expect some ‘give’ on Kashmir. Imran’s deputies cant afford to go back empty-handed, and they can’t afford not to talk. But the key point to note here is that there’s going to be no walking back or negotiation on Article 370 — now or ever. Islamabad would do well to recognise this, and moderate its agenda for a future dialogue into something more realistic.

For the first time in many years, Pakistan will have to ask itself what it stands to gain from Kashmir, and what it is willing to lose. The answer to that is written on the wall, and is easily read.