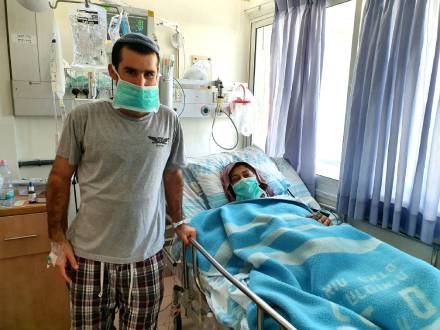 When it comes to health and saving lives, century-old Arab-Jewish enmity and conflict are often forgotten. So it was in Israel on Election Day, September 17, when a 45-year-old Arab woman from Shfaram and a 35-year-old Jewish man from Kiryat Bialik in the north underwent successful live-kidney-donor transplants motivated by altruism.

Shfaram – an Arab city in the Galilee – has over the years often been in the news because of violent conflicts among Muslim, Druse and Christian Arabs living there, but it is also a site reminiscent of Jewish-Muslim cooperation. It is the site of the Shfaram Synagogue built in in the 17th century on top of the ruins of an ancient synagogue that had been constructed on a site where, according to tradition, the Sanhedrin (assemblies of either 23 or 71 rabbis appointed to sit as a tribunal in the ancient Land of Israel) functioned. The synagogue fell into ruin, but during the mid-18th century, Beduin chieftain Zahir al-Umar gave permission to the Jews to return and renovate the synagogue there.]

Today, in the nephrology department of Rambam Medical Center in Haifa, 35-year-old Israel from Kiryat Bialik and 45-year-old Hanan from Shfaram are still recovering from a kidney transplant from live donors.

Hanan received the kidney of Ido, a resident of Hoshaya, a national-religious community settlement that is part of the Jezreel Valley Regional Council. Israel received a kidney from Aida, Hanan’s sister-in-law.

Aida also wanted to give a kidney altruistically to her sister-in-law, but their tissue types were not compatible, just as Ido’s and Israel’s were not. The exchange as part of Israel Transplant’s altruistic cross-transplantation program, put into effect when relatives of would-be organ recipients are found not to have compatible tissue.

Ido was inspired to give his kidney as part of Rabbi Yeshayahu Haber’s Matnat Chaim (Gift of Life) organization, which has been responsible for hundreds of altruistic organ donors so far. Ido, by the way, is the seventh altruistic donor in a number from the community of Hoshaya.

The multidisciplinary staff of Rambam’s nephrology and hypertension department and vascular surgery, general surgery and anesthesia department made it all possible.

Ido and Aida were the first to be wheeled into the operating room, and each had a kidney removed under the experienced hands of Prof. Ahmed Asalia, who is deputy head of Rambam’s department of general surgery and director of the department of laparoscopic and bariatric Surgery. A graduate of the Hebrew University-Hadassah Medical School in Jerusalem, he specialized in general and vascular surgery at Rambam and underwent clinical internship in laparoscopic surgery and obesity surgery at Mount Sinai and Cornell Medical Centers in New York.

Then Israel and Hanan were brought simultaneously into the operating rooms for their transplants, performed over a period of several by Dr. Tony Karam and Prof. Samy Nitecki. Ido and Aida were soon sent home, while Israel and Hanan are recovering in the nephrology department.

Rabbi Haber came to Rambam and handed a small gift to each of the four surgeons. “This is a feat that highlights the unity that can be reached among different sectors and between women and men. For me, that is the beauty and meaning of a Gift of Life,” he concluded.