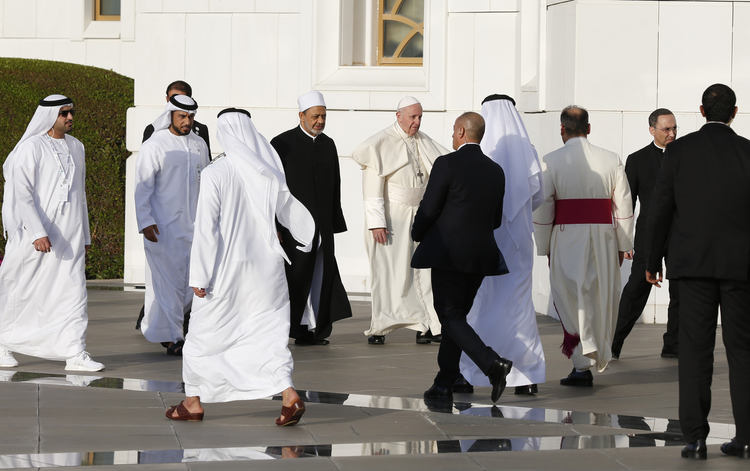 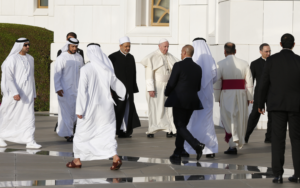 Catholics are often surprised to learn that the church has formal teaching about Christian and Muslim relations. It is set out in the Second Vatican Council’s “Nostra Aetate,” which says:

The Church regards with esteem also the Muslims. They adore the one God…who has spoken to men; they take pains to submit wholeheartedly to even His inscrutable decrees, just as Abraham, with whom the faith of Islam takes pleasure in linking itself, submitted to God…. Christians and Muslims, this sacred synod urges all to forget the past and to work sincerely for mutual understanding and to preserve as well as to promote together for the benefit of all mankind social justice and moral welfare, as well as peace and freedom.

Three features of the teaching are particularly salient today.

First, Muslims worship God. Often, this is doubted or denied by Christians—even some Catholics. But the church herself unambiguously affirms it. Of course, as “Nostra Aetate” notes, Islam and Christianity differ in important ways in how they understand God. Christians believe God is a Trinity of persons. Muslims do not. Christians believe Jesus is God—the second person of the Blessed Trinity. Muslims do not. Still, the God whom Muslims (and Jews) worship is the true God.

Second, the church has esteem for Muslims. One cannot hold in contempt those for whom one has esteem. Catholics are enjoined to eschew hatred for Muslims and oppose discrimination against them. We must recognize that most Muslims are decent, honorable people. Yes, there are evildoers who claim to act in the name of Islam while committing atrocities—and they must be resolutely opposed by all legitimate means, including the use of force. But we must not tar innocent Muslims with responsibility for their crimes.

Catholics are enjoined to eschew hatred for Muslims and oppose discrimination against them.

Third, Christians and Muslims must work together. Vatican II acknowledges a history of “quarrels and hostilities” but pleads with us to forget them. In faith, we are to strive for mutual understanding and stand together for what is right and against what is wrong.

It has been my privilege and joy to work with Muslims like the Islamic scholar Hamza Yusuf, the author Suzy Ismail and Ismail Royer, the director of the Islam and Religious Freedom Action Team for the Religious Freedom Institute, in defending human life in all stages and conditions, beginning with child in the womb; in securing religious freedom for people of all faiths; in protecting refugees from persecution and terror; in opposing pornography and human trafficking; and in upholding marriage as the union of husband and wife.

I urge my fellow Christians of all traditions to remember how much we share with faithful Muslims—the vast majority of whom want for themselves and their children what we want for ourselves and our children: a peaceful society, a decent culture, a fair and flourishing economy, an excellent system of education and the freedom to worship and to bring our religiously inspired convictions concerning justice and the common good into the public square and to make our case, in freedom and peace, to our fellow citizens.

Christians and Muslims must, as never before, join hands to bear witness to God’s sovereignty, to God’s love for each and every member of the human family, to God’s desire that we lead upright lives.

Let Christians and Muslims never again regard each other as enemies. Let us rather recognize each other as brothers and sisters under the fatherhood of “the one God, living and subsisting in Himself; merciful and all-powerful, the Creator of heaven and earth.”