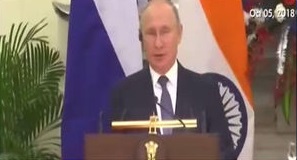 Russia has again endorsed India for a permanent seat on the United Nations Security Council and said that the foreign ministers of the RIC grouping comprising Russia, India and China discussed reforms of the United Nations during the trilateral held through video conferencing on Tuesday.

India has been pushing for reforms of the United Nations including one of its most powerful bodies- the Security Council—stating that its composition doesn’t reflect the current realities and is not representative enough.

Earlier today, Indian external affairs minister S Jaishankar had presented forceful arguments to back a greater role for India in the decision-making of international organisations such as the United Nations. He pressed on the need for a reformed multilateral world order, which can’t ignore India’s role.

“The UN began with 50 members, today it has 193. Surely, its decision-making cannot continue to be in denial of this fact. We, the RIC countries, have been active participants in shaping the global agenda. It is India’s hope that we will also now converge on the value of reformed multilateralism,” Jaishankar said while addressing the RIC summit.

The Security Council has 15 members, including five permanent members — the US, the UK, France, Russia and China. China is the only permanent member of the UNSC which is blocking India’s inclusion into the powerful grouping. Half of the 10 non-permanent members are elected every year for a two-year term, starting on January 1.

India has been recently elected a non-permanent member for a two-year term starting January 1, 2021, following an overwhelming vote. New Delhi has stated that it will work for enhancing counter-terrorism cooperation as one of its main priorities.

India is hoping that its performance at the UNSC in the next two years would reaffirm its credentials to be a permanent member of the council. It is one of the strongest claimants for the seat along with Japan, Germany and Brazil, which together form the G-4—the group that is pressing for reforms in the United Nations terming it outdated and out of sync with the changed global realities.

“Our presence on the Security Council and our performance there over the next 2 years will underscore the value that a country like India brings to the table and reaffirm our credentials to be a permanent member of UNSC,” Vikas Swarup, Secretary (West) in the ministry of external affairs had said on June 18.

It will be India’s eighth two-year term.

Earlier today, Jaishankar recounted India’s contribution to World War-II, which, he said, was not given the due recognition.

“This historical injustice has stood uncorrected for the last 75 years, even as the world has changed. Therefore…it is important for the world to realise both the contribution that India made and the need to rectify the past,” Jaishankar said, and added that 2.3 million Indians had fought in the war and another 14 million had participated in the war production.