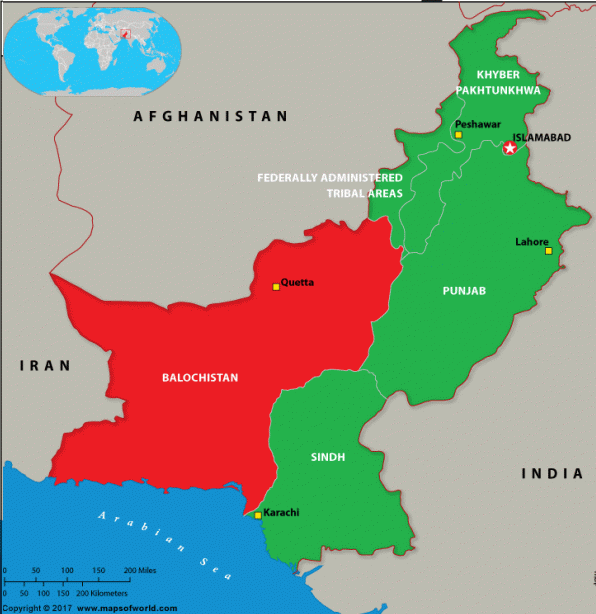 In a scathing speech in the National Assembly on Wednesday, Balochistan National Party (BNP-M) Chief Akhtar Mengal asked that the province that he represents be declared “occupied Balochistan” if the state wants to continue its abuses in what is currently a “no-go area” spearheaded by “death squads.”

Announcing his party’s departure from the federal government coalition led by the Pakistan Tehreek-e-Insaf (PTI), Mengal underlined that the currently ruling party is the latest in a long list of culprits to have backtracked on its vows for Balochistan since 1948.

Without naming the military, Mengal castigated the crackdown in Balochistan, and the growing number of missing persons, which has reduced the locals to mere “bloody civilians.” Drawing parallels with Bosnia, Palestine, and Kashmir, the BNP chief accused the state of colonizing Balochistan, rendering the blood of the Baloch “less worthy than tomatoes.”

“You can think about Kashmir when you get it, what you have in hand is slipping away,” Mengal said, alluding to the separatist movement in Balochistan.

Balochistan’s seven-decade-old grievances with Pakistan range from being denied a fair share in the province’s own resources to a continuum of military operations. Baloch nationalists maintain that the province was militarily usurped in March 1948, against the will of the locals. The growing ethno-nationalism in Balochistan saw insurgencies in the late 1950s and 1960s.

The 1973–1977 conflict, launched under Zulfikar Ali Bhutto, reaffirmed control over the province’s riches, and reinstated centralized political control in the aftermath of the separation of East Pakistan in 1971 – which, like Balochistan, saw an ethno-separatist movement against misappropriation of resources and military occupation.

The ongoing dirty war in Balochistan exploded following the turn of the century under Pakistan’s military ruler Pervez Musharraf, with the 2006 killing of nationalist leader Akbar Bugti sparking the most gruesome wave of Baloch insurgency.

Over the past decade and a half, thousands of Balochs have gone missing, if not tens of thousands. The exact numbers are unknown owing to complete control over information exercised by the state.

On Saturday, two senior journalists became the latest to go missing in Balochistan. In April, the dead body of Sajid Hussain Baloch, editor-in-chief of Balochistan Times, was found near Uppsala, Sweden, with Reporters Without Borders (RSF) maintaining that his death could be linked to his work.

Between 2007 and 2015, 29 journalists were killed in Balochistan. Meanwhile, the mainstream media is only allowed to run the military’s press releases as part of its coverage on Balochistan.

As a result, one story that wasn’t covered last week was that of a Baloch woman, a mother of three, who killed herself after giving up on the protracted fight to find her missing brother.

Similarly, many other families – most of them unheard and unseen – await the return of their loved ones, dead or alive. The state, however, continues to either deny the existence of many missing persons, or lumps them in an undefined category of “terrorists.”

Mama Qadeer, the activist who initiated Voice for Baloch Missing Persons (VBMP) and launched a 2,800 kilometer march from Quetta to Islamabad five years ago, leads regular protests in front of the local press club. Qadeer says that at least 47,000 Balochs have gone missing since 2000, the figure also quoted by the Human Rights Commission of Pakistan in its latest report.

Parallel to the military abuses, resulting in the growing number of missing persons, is the center’s unabated stranglehold over Balochistan’s resources. This is exemplified by the Balochistan town Sui, which has supplied gas to the entire country over the decades, but is still not getting any of the daily 800 million standard cubic feet of natural gas that it produces.

Balochistan, which still supplies almost a quarter of Pakistan’s total gas, this year faced the worst gas shortfall in history amid plummeting winter temperatures. After decades of the center’s control over their gas, the Baloch now have similar apprehensions vis-à-vis the Reko Diq gold and copper reserves.

After long having raised alarm bells over “Punjabi” hegemony, Baloch nationalists are deeming the growing influence of Beijing in the area as bona fide “Chinese colonization.”

With Beijing calling the shots on the much touted $62 billion China-Pakistan Economic Corridor (CPEC), the nationalists maintain that one occupier is being replaced with another looking to exploit Balochistan’s rich resources and its geopolitical significance. The deep-water port at Gwadar holds the geostrategic key to CPEC, connecting Eurasia, South East Asia, South Asia, and Africa with the much peddled Belt and Road Initiative (BRI)

It is poetic injustice that CPEC is wrapped around a corridor of estrangement that connects Xinjiang and Balochistan. To the native populations, CPEC might as well be a multibillion-dollar graveyard for the aspirations of the two subjugated territories.

Instead of managing to curb the growing Baloch militancy, which has also targeted civilians, the Pakistan Army has long used Balochistan’s volatility to serve its strategic interests, with the large swathes of uninhabited land bordering Afghanistan and Iran providing havens to many jihadist groups. It is similar to the military’s duplicitous security policies in the former Federally Administered Tribal Areas (FATA) on the Afghan border.

The military has also historically kept check on Baloch separatists by deploying groups like Lashkar-e-Jhangvi (LeJ), which have now overlapped with the Islamic State’s (IS) South Asia factions. The LeJ and IS, meanwhile, have collaborated to devastate the religious minorities in Balochistan, especially the local Shia Hazara and Christian populations.

In his meeting with the Hazara protestors in 2018, Army Chief General Qamar Javed Bajwa conceded that sections within the military have collaborated with jihadist outfits in Balochistan in the past, owing to a “mindset that has existed” for decades.

As far as Balochistan is concerned, the colonialist mindset of the military, and its selected band of politicians, remains well and truly there. And now with Baloch insurgency intensifying in recent weeks, and echoes of “occupied Balochistan” resonating in the National Assembly, Islamabad and Beijing have to consider giving locals due right to their own resources – or spend a significant chunk of Balochistan’s riches just on continuing the military occupation.