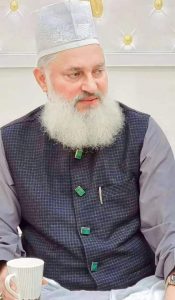 Founder and President of All India Ulama and Mashaikh Board and Chairman of World Sufi Forum, Hazrat Sayyed Mohammad Ashraf Kichhochhavi, strongly condemned the incident of burning of Holy Quran in front of the police on Friday by a far-right extremist politician outside the Turkish Embassy in Stockholm, Sweden.

Giving said that these propagandists of hatred are trying to test the patience of Muslims by doing this.

Hazrat further said that these people are not true humans; they are savages in fact. Now the world should recognize the real terrorists. They should admit that terror has no religion, no dress or costume.

Hazrat strongly condemned the heinous act of the Swedish terrorist and expressed deep anger and anguish against the Swedish government as well. “Now there is no doubt that the sentiments of Muslims all over the world have been hurt by this hate crime and we express both sorrow and grave concerns about these terrorists who want to take advantage of this incident by provocating Muslims so that they get emboldened to do something wrong and thus they get a chance to defame Islam and Muslims as usual.

“Let’s prevent such incidents of hate crime in a sustained manner. Muslims have to control their emotions and respond to such people in the same way as our holy Prophet (pbuh) has taught us, that is, by following the words of the Quran in letter and spirit and transforming its teachings into our practical lives”, he said.

Muslims have to understand that Allah has taken it upon Himself to protect the Quran, as he has given a clear statement in Surah Al-Hijr verse (9):

“Indeed, it is We who sent down the Qur’an and indeed, We will be its guardian”.

Hazrat also said that we demand the Government of India to immediately call the ambassador of Sweden and makes him aware about the sentiments of the Indian Muslims and demand the Swedish government to immediately arrest this hate monger and give him severe punishment. Until this happens, India should break all diplomatic relations with Sweden.