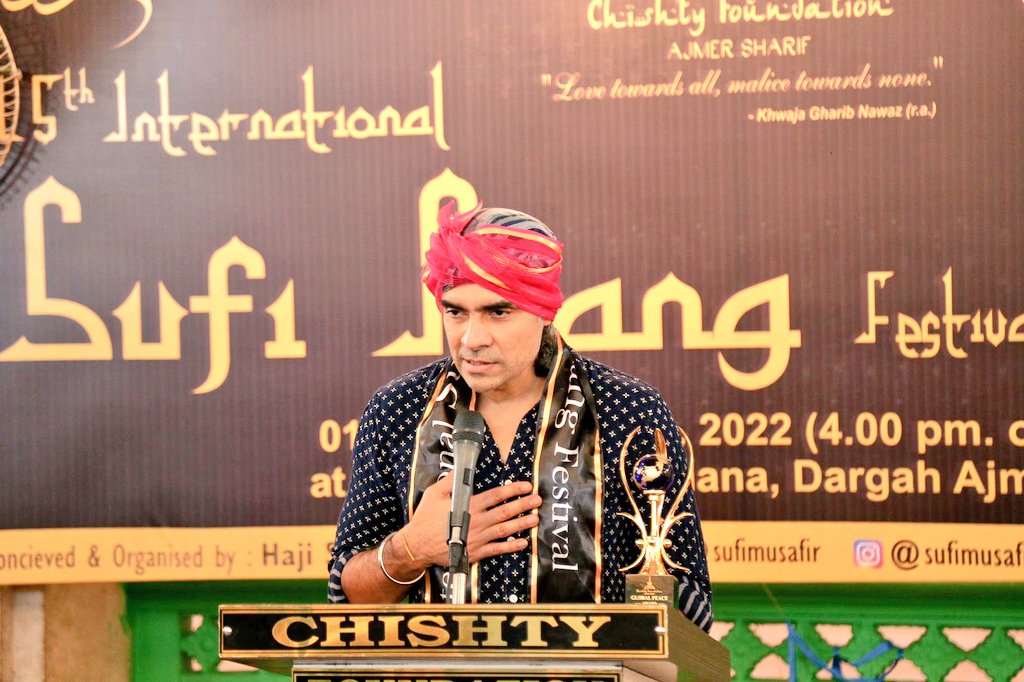 The largest spiritual celebration of the Sacred Arts of Sufism in India is the International Sufi Rang Festival (ISRF). It has evolved into a distinctive art exhibition over the years, bringing together renowned calligraphers, painters, curators, and visual artists from all over the country and other continents of the world. 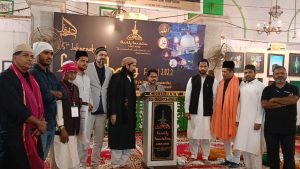 The ISRF was conceived by Haji Syed Salman Chishty of Ajmer Sharif. It has been hosted and organised by Chishti Foundation for the past 15 years inside the 800-year-old majestic Sufi courtyard at Dargah Ajmer Sharif, known as Mahfil-e-Samaa Khana (spiritual audition hall).

The Festival has been promoting the pluralistic practises of the Chishti Sufi Order among its devotees and followers throughout India, South Asia, and different countries around the world. These practices are based on the fundamental Chishti principles and noble teachings of Hazrat Khawaja Moinuddin Hasan Chishti Gharib Nawaz (R.A), particularly “Love for all, malice towards none,” and “Serving all Creations of God with Unconditional Love.”

The final day of the 15th International Sufi Rang Festival (ISRF) in Ajmer Sharif was marked by extraordinary enthusiasm on the part of the distinguished Guests of Honour as well as the audience, which included academicians, scholars, writers, well-known Sufi artists, and calligraphers from about 40 states in India. There were also visual contributions from artists from 32 different countries who were of Arabic and Persian descent.

While workshops on calligraphy inscriptions and a captivating display of mystical Sufi arts went on all day in the Mahfil Khana of the Dargah Ajmer Sharif, the glorious night of the 10th Rabi-ul-Awwal marked a significant turning point in the history of the annual Sufi Rang Festival.

Through their spectacular encounters and public speeches, a wide range of film industry superstars, government officials, media producers, and literary personalities demonstrated their fervent enthusiasm for the mystical Sufi arts on this occasion. 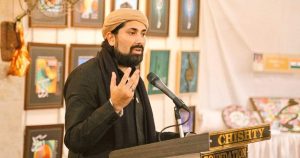 On the 7th day of the ISRF, Haji Syed Salman Chishty, Gaddi Nashin at Dargah Ajmer Sharif and chairman of Chishty Foundation, extended the vote of thanks to all the dignitaries who took part in the evening session, which was moderated by Mr. Ghulam Rasool Dehlvi, an author and Indo-Islamic scholar. 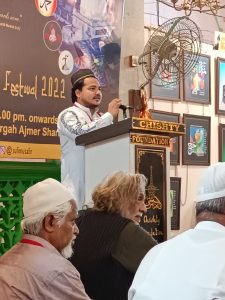 Lieutenant General Zameer Uddin Shah, former vice-chancellor of Aligarh Muslim University and the event’s chief guest, praised the initiative as a fantastic attempt to bolster the social fabric of the country. He asserted that the person who actively participates in social and humanitarian service with unwavering dedication is a true Sufi. He declared, “A Chishti is the one who embraces one and all irrespective of caste, creed and culture.” 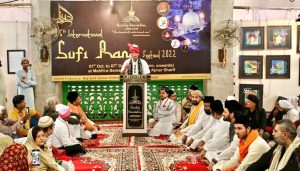 Muzaffar Ali, a well-known filmmaker, poet, and cultural revivalist spoke eloquently about sacred arts and aesthetics. He referred to Islamic spirituality as it is revealed in the holy Qur’an and the traditions of the Prophets, including the well-known Hadith that states, “Allah is the Most Beautiful and [therefore] He Loves the Beauty.” He discussed every facet of the Sufi perspective on beauty and aesthetics in his brief but insightful discourse. 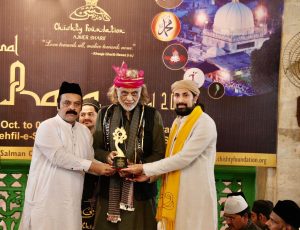 Padma Shri Ustad Wasifuddin Dagar, an acclaimed classical Dhrupad singer from India, praised the Sufi Rang Festival and emphasised the necessity for ongoing efforts to promote the significance of cultural festivity and plurality through the holy arts, particularly the heartfelt Sufi music. The current 15th International Sufi Rang Festival saw a mixed crowd of artists and academics, bureaucrats and filmmakers mesmerised by the 20th generation modern Dhrupad vocal master, who has been performing beautiful forms of Dhrupad as his family tradition and holding concerts in India and abroad. 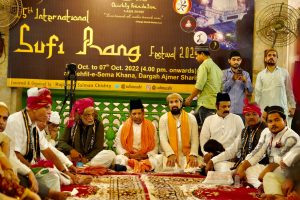 Blending patient phrases with fine rhythmic control and an effortless vocal elasticity, Ustad Dagar left the audience spellbound, reminding them of his father, noted Dhrupad singer Ustad Nasir Faiyazuddin Dagar. Dhrupad, one of the oldest classical traditions still in existence today, may be traced back to the 15th century when a Dagar served as a court musician for the Mughal Emperor Akbar. And Padam Shri Ustad Wasifuddin Dagar is still involved in it today. The Dhrupad rendition form of Indian classical music has been attempted to be revived by the Sufi Rang Festival at Ajmer Sharif.

Among the guests of honour at this session of the 15th ISRF-2022 was Shri Vijay Jawaharlal Darda, chairman of the Lokmat Media Group and a renowned journalist and experienced politician. Shri Darda inspired the event organisers, curators, and volunteers as a kind-hearted philanthropist and the son of a Freedom Fighter, praising the Chishtiya Foundation’s heroic efforts for peace-making and nation-building. 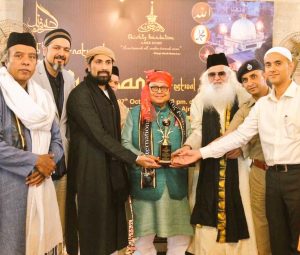 The Global Peace Awards were handed to each dignitary in appreciation for their many years of visionary leadership and impeccable direction in serving the country and the entire human race. The guardians of the holy shrine, Khuddam-e-Khwaja Saheb, also congratulated them at the same time with the dastar-bandi custom.

Ustad Wasifuddin Dagar, the classical Indian Dhrupad singer, once more astounded the audience with his exquisite Sufiyana Kalam (spiritual lyrics) and soulful music. The live workshops and interactive sessions on calligraphic inscriptions, sacred arts, and spiritual ethos being imparted in the Mahfil Khana as part of the International Sufi Rang Festival stimulated an avid interest among the dignitaries.

On the 7th October, the Closing Ceremony was held in which the festival brought together not just Sufi artists and calligraphers but also writers, senior journalists, well-known filmmakers and musicians of great repute.

In the closing ceremony after the Friday prayer, a crowd of shrine visitors turned up in the festival which welcomed and felicitated the famous filmmaker Imtiyaz Ali and prominent singer Mohit Chauhan. They spoke about their inner spiritual journey of rising beyond the mundane affairs in their divine love cleansing the internal self. Imtiyaz Ali began his talk with a famous couplet of Persian Sufi poet Jalaluddin Rumi: “What you seek is seeking you”, which was the tagline of Shahrukh Khan-starrer Jab Harry Met Sejal, a romantic movie written and directed by Ali. “Cinema is one of the most important and influential art forms today which has fairly contributed to the dissemination of universal values of Sufism through mystical music”, Ali concluded. 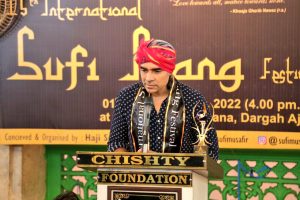 Afterwards, Mohit Chauhan, who is known for his best work and soulful Sufi songs in Hindi films, sung the famous spiritual lyrics “O Nadaan Parindey Ghar Aa Jaa” from the super-duper hit Rockstar. “This was a tribute to Hazrat Khwaja Gharib Nawaz and his message of unconditional love which echoes throughout the movie”, he said. 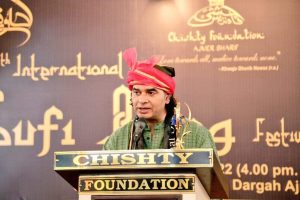 Senior journalist Shri Rishi Suri of the Daily Urdu Milap News organisation was also honoured and felicitated by Khuddam-e-Khwaja Saheb. In addition, Shri Anshdeep ji District Collector of Ajmer Sharif and Mr. Ricky Kej, the world music composer and Granny Award Winner, Janab Imran Chishty Khwajgani and the Sarv Dharm Maitria Sanstha were also felicitated. Dargah Ajmer Sharif Gaddi Nashin Haji Syed Salman Chishty, the organizer and conceiver of the festival and Chairman of Chishty Foundation extended vote of thanks to all artists, participants and distinguished guests of the ISRF-2022. In his conclusive remarks, he said that that art is the mirror of culture, and the epitome of society. Sufi is a lover of art because art attracts everyone without discrimination. Culture binds us in a thread of love.