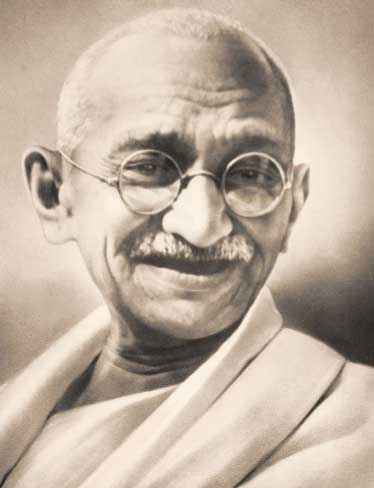 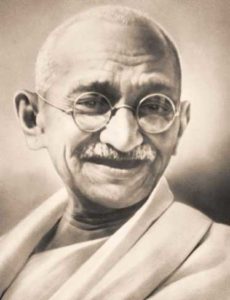 It is well known that Mahatma Gandhi began his meetings with a all faith prayer – reciting portions from various religious texts. Gandhi was a firm believer in the idea of communal harmony. From his childhood as he used to nurse his father, he got an opportunity to listen to his father’s friends, belonging to different religions including Islam and Zoroastrian, about their faith. Interestingly, he was biased against Christianity as he heard some preachers criticise Hindu Gods and believed that drinking and eating beef were integral part of this religion. It was much later in England when a Christian, who was a teetotaler and vegetarian, encouraged him to read Bible, that Gandhi gave a serious thought to this religion. Once he started reading Bible, especially the New Testament, he was enthralled and particularly liked the idea that ‘if somebody slaps you on the right cheek, offer your left cheek.’

Even before reading Bible he had got this idea from perusal of different religious texts that evil should not be countered with evil but by good. He was exposed to different religions but he doubts whether he was a believer in his childhood. In spite of this he was of the firm view that all religions deserve equal respect. Hence seeds of communal harmony were sown even at a young age for him. In fact, he became more atheist after reading Manu Smriti as it supported non-vegetarianism. The essential learning he imbibed from these religious texts was that this world survives on principles and principles are subsumed in truth. Thus from his childhood truth was highly held value which became the basis for living his life and various actions that ensued.

It is ironical that Gandhi, who is wrongly accused of having supported partition of the country, whereas in reality it was people like famous poet Iqbal and fundamentalist Hindus like Savarkar who made public pronouncements supporting the idea of two nation theory, is questioned by the fundamentalist Hindus for not having undertaken a fast to prevent partition of the country? The fact is decision about partition was taken by Mountbatten, Nehru, Patel and Jinnah by marginalising Gandhi and he was only informed of the decision as a fait accompli. Had Gandhi supported the idea of partition why would he choose to remain absent from the ceremonies of transfer of power from the British to India and Pakistan? When India was becoming independent Gandhi was fasting in Noakhali to stop communal riots.

In fact, Gandhi realised and he had publicly expressed his frustration on people not heeding to his advice of practicing tolerance, non-violence and communal harmony. The only role he could play was to bring moral pressure on people to desist from communal thought and violent action. He undertook a fast in Delhi in January 1948 upon returning from Bengal. This fast was in support of minorities – Muslims in India and Hindus and Sikhs in Pakistan. Hindu fundamentalists were furious and tried to defame him by spreading a rumour that he was fasting to force Indian government to give Rs. 55 crores to Pakistan, which was actually due to them as part of an agreement on division of assets of Government of undivided India with Mountbatten, it received positive response from Muslims in India and Pakistan. He was hailed in Pakistan as one man in both countries who was willing to sacrifice his life for Hindu-Muslim unity.

Some people say that Gandhi could not speak in harsh terms to Muslims as he could to Hindus and hence practised Muslim appeasement. This is also not true. During his fasts he convinced nationalist Muslims visiting him to condemn the treatment of minorities in Pakistan as un-Islamic and unethical. He beseeched Pakistan to put an end to all violence against minorities there if it wanted the State in India to protect the rights of minorities here. When some Muslims brought rusted arms as a proof to him that they had given up violence, probably out of concern for him so that he could give up his fast, he chastised them and asked them to cleanse their hearts instead.

Gandhi’s towering personality could contain communal violence to some extent. His assassination had a more dramatic impact and brought all such violence to an end. The ban on Rashtriya Swayamsewak Sangh by Sardar Patel also helped. But four decades later the communal politics raised its fangs again when Babri Masjid was demolished in Ayodhya. What followed is a downward slide of the nation into communal frenzy. For the first time a right wing party practising outright communal politics is in power with full majority at the centre and in most states of the country, incidents of mob lynching on suspicion of Muslims having partaken beef, their marginalisation in social, economic and political life, treating them as second rate citizens are the new normal. Majoritarian thinking, which is contrary to the idea of democracy, is dominating and the minds of people have been communalised as never before in the history of the country. The communal politics has brought out the worst in us.

It appears that the seed of communalism was buried is us. Probably seeds of good and bad both are buried in us. The atmosphere in which we grow will determine which thinking will flower. Communal politics in the post-Babri Masjid demolition era fanned communal thinking and it started dominating. By this time the generation influenced by Mahatma Gandhi’s ideas and who had seen Gandhi in flesh and blood was on its way out. Hence thought and practice of communal harmony waned.

I was once invited by a respected gentleman belonging to Jamat-e-Islami for a meeting on communal harmony. I told him that if he was inviting me as a representative of Hindu religion then he should rethink about it as I was an atheist. He opined that I need not come for the meeting. I argued with him that only an atheist can truly practice the concept of communal harmony because he is equidistant from all religions. Anybody practising a faith would always be more attached to his religion. Hence it appears that we have not even given a serious thought to what communal harmony is all about and have paid only a lip service to the idea. No wonder we have landed is such a messy situation today.